From the moment Jeremy Corbyn was elected leader of the Labour Party last year, it was clear that establishment forces in the party would try to oust him at the earliest opportunity.

While the local elections in May failed to produce the decisive defeat that would’ve given them a pretext for a coup, the result of the Brexit referendum has provided a convenient opening.

The day after the Leave vote, Members of Parliament (MPs) Margaret Hodge and Ann Coffey submitted a motion of no-confidence in Corbyn’s leadership to the Parliamentary Labour Party (PLP), a body of 229 Labour MPs.

The turmoil only built from there. Shadow foreign secretary Hilary Benn called for the Labour leader’s resignation and was promptly dismissed; twenty-one shadow cabinet members resigned in opposition to Corbyn’s leadership; and the PLP motion of no-confidence passed overwhelmingly (though its impact is purely symbolic).

According to the parliamentarist common sense, endlessly peddled by establishment figures in the media, Corbyn should have “done the decent thing” and resigned after the mass shadow cabinet defection or the PLP no-confidence vote. (The coup camp’s decency has rarely been called into question despite the actions of Blairites like Ian Murray, who lambasted pro-Corbyn protesters at his office as “dogs,” and Jess Phillips, who declared in December that she would “knife [Corbyn] in the front.”)

Corbyn, however, has steadfastly rebuffed the PLP’s demands to resign. Invoking the strong mandate that he won in last September’s leadership election, he has argued that his fate must be decided by the Labour Party membership. And that membership is increasingly mobilized.

Momentum, the movement organization that grew out of the Corbyn campaign, has organized mass demonstrations and meetings across the country, including a ten-thousand-strong rally in Parliament Square last Monday.

The clash between rank-and-file members and party elites shows no signs of abating. For now, the future of Labour and Jeremy Corbyn seems to consist of an array of hypotheticals.

Under the Labour Party Constitution, a candidate challenging an incumbent leader needs the endorsement of a combined 20 percent of MPs and members of the European Parliament (MEPs). And since the coup camp has the support of a supermajority of MPs, it could easily field a candidate and trigger an election.

Nevertheless, after days of speculation, former frontbencher Angela Eagle still hasn’t announced her candidacy, and Deputy Leader Tom Watson is reportedly looking to avoid an election by crafting a deal to get Corbyn to step down.

The strong pro-Corbyn mobilizations over the past week may have prompted second thoughts from potential challengers, who would endure the wrath of party activists if they became the face of the anti-Corbyn coup.

If the putsch leaders finally do put up their own candidate, the next big question would be Corbyn’s place on the ballot. The party constitution is notoriously ambiguous as to whether incumbent leaders have to reach the 20 percent endorsement threshold in a triggered election, or if they are automatically included on the ballot.

The incredible ambiguity on such a significant question underscores the sheer parliamentarism underlying party affairs — it was inconceivable that a leader who could not command the support of 20 percent of the PLP might run nonetheless, counting on strong rank-and-file backing. (In fact, the last three times the leader or deputy leader faced a challenge, the incumbent either didn’t collect nominations or did so without the understanding that they were necessary for ballot access.)

Regardless, it is now up to the party’s National Executive Committee (NEC) to interpret the matter. While the NEC has strong union representation and is not an anti-Corbyn bastion like the PLP, its decision may be challenged in court.

If Corbyn isn’t granted ballot access by virtue of his leadership position, he would need fifty nominations from MPs and MEPs; in the no-confidence vote, 172 MPs opposed him, 40 backed him, and 17 abstained.

Those in the coup camp know that the nomination protocol is the most significant institutional chokehold they still hold. But they’re also aware, no doubt, that they might not have that power for long: the Campaign for Labour Party Democracy (CLPD) is planning to lower the threshold to 5 percent at the party conference this fall.

So while the chance that a coup could succeed without a vote is small, now may be the last opportunity for the anti-Corbynites to shut him out of the ballot.

If such efforts fail, Corbyn would run in a fiercely polarized leadership election that would recall the struggles over party democracy of the early 1980s. At the time, the establishment selected the “soft left” Neil Kinnock as the best person to contain the activists and marginalize the “hard left.”

This time around, Angela Eagle is the most likely to play that role (other speculated contenders, like Owen Smith, also belong to the “soft left”). Precisely because she was once closer to the Left, she would be in a better position to contain radicals, demobilize the base, and shift power back to the PLP — though strong mobilizations on the Corbyn side could render such incorporation impossible, even by a “soft left” figure.

Even though the Labour left was defeated the last time it mounted a serious challenge, it is because of the CLPD’s success in pushing reform that Corbyn is still the leader; until 1981, MPs could simply sack a party leader, with no input from membership.

Having failed to maintain power through One-Member-One-Vote, putsch leaders would likely prefer to return to such a system, stamping out the principle that the CLPD fought so hard for: that the party belongs to the members.

Politically, the establishment effort to unseat Corbyn is incoherent if not contradictory.

The anti-Corbynites’ oft-stated grievance is the Labour leader’s insufficient commitment to the Remain campaign, which they say contributed to its defeat.

Yet they are not running on a staunchly pro–European Union, cosmopolitan platform. Some have even attacked Corbyn for supporting the free movement of people in the EU, arguing that such a position is out of step with a supposedly xenophobic electorate.

These conflicting lines of attacks spring from the deeper contradictions of New Labour politics. New Labour’s claim to legitimacy is electability, and its political strategy is chasing the (supposedly moderate) median voter; yet its political principles — a commitment to neoliberal globalization, exemplified by the EU — are now deeply resented by the very people in “middle England” whom they invoke against the Left.

Having lost their social base and electoral bona fides, the coup leaders’ cause seems to have simply become parliamentarism — the idea that MPs, not members, should steer the direction of the party.

The most common claim on the coup side is that Corbyn should resign because he has lost support in the party — by which they mean that of his colleagues in Parliament.

Scottish Labour leader Kezia Dugdale, for example, said as she called for Corbyn’s resignation, “I would not be able to do my job if I did not have the support of the parliamentary party, regardless of the mandate that members gave me.” And when anti-Corbynites talk of party unity, the implication is that members must follow the MPs for unity, not vice versa.

Despite the rebellion of the parliamentarians, popular support for Corbyn appears to be holding up. The vast majority of the Constituency Labour Party leaders who backed Corbyn last year continue to do so — including Eagle’s own CLP.

Sixty thousand new members have joined in the past week, pushing the membership to a historic high. (While both sides have been recruiting, at least a sizeable proportion have signed up to bolster Corbyn.) Corbyn is ahead in the polls (if narrowly) against all of his likely challengers. His support from unions — including the country’s largest, Unite — hasn’t ebbed.

If anything, the attacks have driven home the necessity and centrality of Momentum for the whole Corbyn project. Over the past week, the group has doubled in size to twelve thousand and launched enormous rallies from Manchester to Liverpool to Nottingham. They are well-placed to run a strong campaign in the election.

With neither side backing down, the disjuncture between MPs and members is now among the starkest in history, rivaling that of the early 1980s, as seen in the table below: 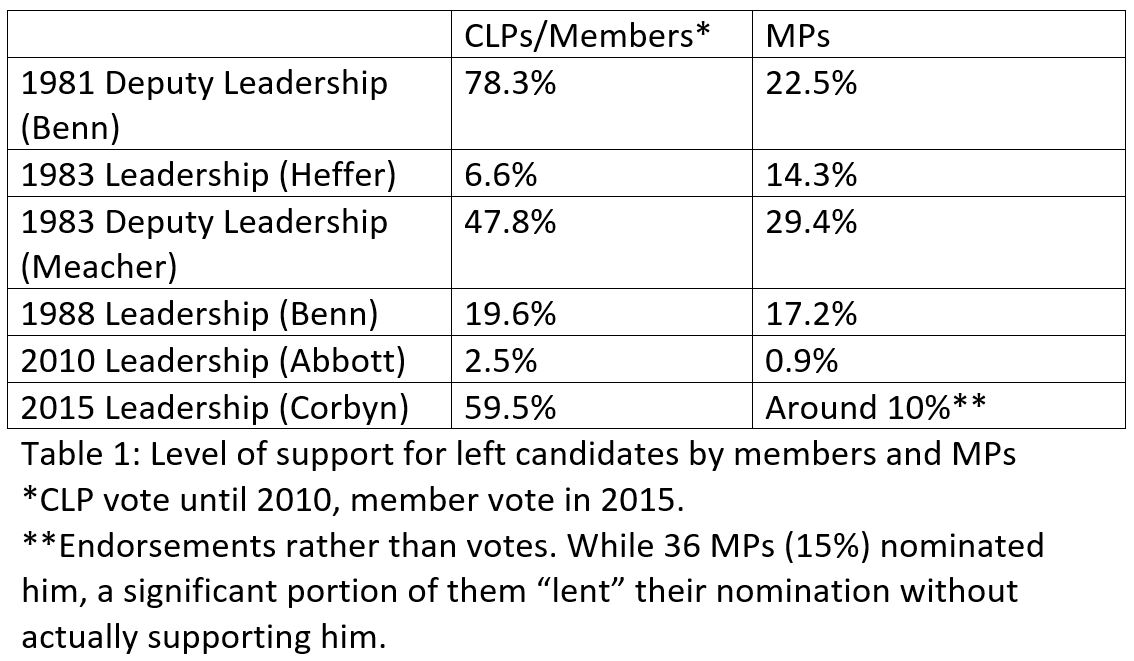 Such a situation is clearly unsustainable in the long term. In the 1980s, the fissure was resolved in favor of party elites, with the defeat of the radical membership and the isolation of Labour left figures like Corbyn himself. We can expect the same outcome if Corbyn loses.

But what if Corbyn holds on, plotters be damned? Corbyn could not plausibly lead a united party to electoral victory, let alone implement radical policies in government, if the coup participants continued to occupy a majority in the PLP. How could these MPs be challenged?

One approach would be deselection, a tactic that would allow the Labour left to boot anti-Corbynites from office. The coup leaders of course view this with contempt.

They argue that MPs have the mandate of the nine million voters who supported Labour, but didn’t get to choose who the Labour candidate was; and they simultaneously claim that their parliamentary candidacy should never be put to a vote by members, let alone revoked democratically. In the past, Momentum and other key Corbynite figures have said they would oppose deselection efforts, and most (though not all) have stuck to that during the current row.

While this conciliatory tack has ameliorated open hostility, already there is a groundswell of support for ousting right-wing MPs and spontaneous calls for deselection at the CLP level. And an acrimonious leadership race would fuel radicalization among the grassroots of Momentum and union branches (which hold key roles in initiating the deselection process, unless the rules are changed to make it easier).

Even if Corbynite leaders weren’t keen on taking the most radical course, mass deselection of the coup-supporting MPs would be both an exercise of Labour Party members’ democratic rights and the only way to structurally shift the party to the left over the long term. Continued popular mobilization against the parliamentarians’ undemocratic coup is needed to pave a way toward that future.