I’ve been putting off this post, waiting for the Libyan revolution to reach some kind of decisive conclusion to its military phase. But it looks like that could take a while: the game of “Where’s Muammar” may go on for a while, and in the worst case scenario his loyalists could mount a prolonged insurgency. But despite that it’s pretty clear that the rebel forces are going to take some sort of tenuous command over the country. So it’s worth looking back on the war for Libya, and NATO’s participation in it.

When Tripoli fell to the rebel forces, I was glued to Al Jazeera as one neighborhood after another fell, and various Gaddafi family members were captured by the rebel army (or not). In some ways, the moment was much like the fall of Mubarak, which I memorialized in rather sentimental and grandiose fashion. But I find my feelings about Libya to be a bit more complicated.

That’s not just because the next steps for the Libyan rebels are so unclear, nor only because the “Transitional National Council” currently moving into Tripoli is stuffed full of dodgy former-regime elements, nor just because of the unpleasant undercurrent of racism among some of the revolution’s supporters. One of the major things that sets Libya apart from what happened in Egypt — aside from the far greater level of death and destruction, obviously — is that the activists in Tahrir Square were clearly making their revolution against the preferences the United States, the Arab despots, and the rest of the imperialist power structure; the US only turned on Mubarak when it became clear that his position was untenable. In Libya, by contrast, the rebels have come to power backed by six months of relentless NATO bombing raids.

I didn’t welcome US participation in the war in Libya, but that was as much for American reasons as Libyan ones. I was worried about intervention both because the lack of congressional approval seemed manifestly illegal and set yet another precedent for future executive lawlessness, and because I was skeptical that war would lead to a good outcome. I still don’t think those positions were wrong; as Glenn Greenwald points out, the fall of Gaddafi is by no means enough to vindicate the decision to go to war. And even if things have turned out a bit better than I expected, surely Iraq has taught us that “victory” can quickly degenerate into insurgency and civil war.

Yet it remains the case that the rebels look like they will succeed in deposing the vile Gaddafi, and they have done it with NATO support. That’s a hard thing to process for somebody like me. As a leftist and an activist, I cut my teeth on anti-imperialism; by chance, the other day I stumbled across this photo of seventeen-year-old me speaking at a protest against the sanctions on Iraq, circa 1997 or 1998: 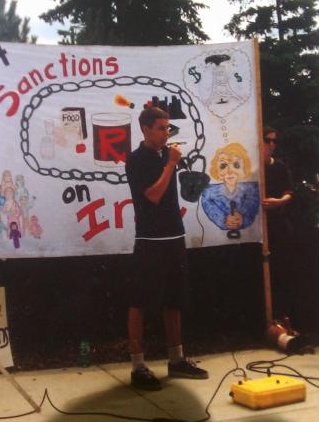 Back then, we had to organize against the bombing of Iraq at a time when most people didn’t even realize we were still bombing Iraq.

My experience in the anti-sanctions movement, combined with the repeated discrediting of the humanitarian-warmongering arguments of the “decent left”, made it very hard for me to cheer on the NATO-backed Libyan rebels. I’ve learned the hard way that optimistic liberal claims for US warmaking in the post-Cold War era have been consistently and catastrophically wrong: in Haiti, in Somalia, in Kosovo, in Afghanistan, in Iraq. But I’ve been forced to conclude that what happened in Libya is something rather novel, which we shouldn’t reflexively interpret through the lens of those earlier wars. And if we aren’t willing to change our theoretical framework when the world changes, then we’re not much better than the liberal hawks, living in the dreamworld of their perpetual 9/11.

Richard Seymour has a more hardline anti-interventionist post on Libya which, while it makes a number of important points, nevertheless seems to me like it strikes rather the wrong note. Seymour observes that “The rebel army is commanded by someone who is most likely a CIA agent”, and goes on to predict that the US and its allies will quickly move to set up a pliable regime pro-Western “liberals” who will go along with the designs of neoliberalism.

I agree with this, as far as it goes. But Seymour goes on to say that “I don’t think we’re witnessing a revolutionary process here.” This strikes me as far too simplistic. The leadership of the TNC may not be revolutionaries, but they appear to have only the most tenuous control over the forces that actually defeated Gaddafi, like the Berber units in the Western mountains and the dozens of privately organized militias. Recall that it was just a few weeks ago that the rebels looked to be too busy assassinating one another to make any military gains. The usual bourgeois foreign-policy types are warning of splits and “instability” on the rebel side, because what the US and NATO want most is a stable and cooperative regime. But the fractiousness and disorganization that so terrifies the Western foreign policy intelligentsia is precisely what may yet allow a revolutionary dynamic to emerge.

Here’s what I think we lefty anti-imperialists ought to recognize about Libya. First, there was a real revolutionary insurgency on the ground that started long before NATO got involved; that makes the situation completely different from Iraq or Afghanistan. Second, while we should certainly be wary of the attempts of the imperialist powers to control the outcome of events in Libya, we need to acknowledge that they would have made such attempts even if they hadn’t intervened militarily. And in that case, the interference would have been entirely at the level of covert operations and diplomatic back-channels, and hence harder to expose and criticize. Note that this also means that trying to separate a good Egyptian revolution from a bad Libyan one entails fetishizing military force: it’s clear that US pressure on the Egyptian army played some role in pushing Mubarak out of power in the end, but that doesn’t invalidate the work of the Tahrir protesters.

It’s impossible to know whether the rebels could have won without NATO — which, if it was possible, would have been a preferable outcome. On that score I’m not nearly as certain as Gilbert Achcar that NATO involvement was a necessary evil. But what is certain is that the fall of the house of Gaddafi was not something NATO did for the Libyan people; ultimately, it was Libyans who did the fighting and dying on the ground. We should recognize and respect that sacrifice, rather than immediately reducing the rebels to a passive tool of imperialism.

Ultimately, I think the right tone on the Libyan situation — cautious, critical, but hopeful — is the one struck by Lou Proyect. Lou is certainly no humanitarian imperialist — I first came across him when he was eviscerating the proponents of the war on Serbia in the late 1990s. But in the past few months he’s been doing thankless rhetorical battle against the tired pro-Gaddafi arguments of the vulgar anti-imperialist “left”, and he recognizes that there’s more to the Libyan rebels than the stooges speaking to the cameras in Benghazi.

The position I’m trying to stake out, I guess, is that capitalist wars are never good in and of themselves, since they aren’t undertaken for good reasons, but that doesn’t mean they can’t ever have good consequences, nor does it mean that the enemy of my enemy is always my friend. Given the overall horrible track record of recent US wars, my prior is still to be against intervention in almost all circumstances, and Libya hasn’t changed that. But I’m still willing to admit that this time things haven’t turned out as badly as usual.

As it stands today, there still aren’t any significant NATO ground troops, and the TNC is so far holding firm on the position that there won’t be any. Meanwhile, the toppling of Gaddafi is leading to unpredictable outcomes and new embarassments for the US and its allies, such as the revelations about Gaddafi’s close cooperation with the CIA and MI6 in subjecting Libyans to rendition and torture. If the Bush administration taught us anything, it’s that imperialist war planners don’t always know what they’re doing; there’s no reason that Libya can’t end up diminishing Western power as well.

As I argued in the second issue of Jacobin, the revolutionary upsurge in the Arab world signifies, among other things, the waning grip of American imperialism. (So too does the Obama administration’s desperate and ridiculous scramble to stop the Palestinian statehood bid at the UN.) In Libya as in Egypt, the imperialist powers were following behind events, rather than making them. If we fail to comprehend that, we risk attributing a false omnipotence to the United States and its allies, and thus missing a real anti-imperialist victory when it’s right under our noses.

And if all of that doesn’t convince you, how can you hate on rebel forces that roll like this?