Last week, the US Supreme Court issued two commendable rulings that may have seemed off-brand for a conservative judicial panel: in one case, the court prevented President Trump from deporting the children of undocumented immigrants; in another case, the court extended antidiscrimination protections to cover sexual orientation and gender identity.

Progressives rightly lauded these civil rights victories, which dominated the headlines. But amid the celebrations, the court also issued the three following rulings, which received relatively little attention:

Once again, the high court used business cases to fortify the power of the already-powerful. I say “once again” because for all the focus on the court’s rulings on important social issues, much of the justices’ work is on business litigation — and in that role, the court now serves as a reliable star chamber defending corporations and the wealthy.

This is a development that is only rarely spotlighted — and it is barely part of the discourse when Supreme Court appointments are referenced in national politics. Indeed, one of the very few times corporate power became an issue in a recent Supreme Court nomination fight was when a few senators briefly asked Neil Gorsuch about his legal defense of a company’s decision to fire a worker for trying to not freeze to death — but Gorsuch was confirmed anyway.

That confirmation helped the court continue to be a driving force behind the corporate takeover of our country and our democracy.

The Most Conservative Court in Modern History

Among the best ways to see the court’s corporate fealty is to follow amicus briefs filed by the US Chamber of Commerce, the most powerful business lobbying group in Washington.

The Chamber filed an amicus brief in all three of last week’s cases — and the court fully sided with the Chamber’s arguments in the fossil fuel and pension cases. In all during the current term, the Supreme Court has sided with the Chamber in nine out of thirteen cases, according to the Constitutional Accountability Center (and one of those supposed losses was the SEC case, in which the court did not comply with the Chamber’s demand to fully abolish corporate punishments, but still severely limited that authority, which was a partial win for corporations).

This is part of a larger historical shift. According to the organization’s 2019 report, “Since Justice Samuel Alito joined Chief Justice Roberts on the Court in 2006, the Chamber’s success rate has surged: the Roberts Court has sided with the Chamber in 70 percent of its cases, diverging sharply from the Rehnquist Court (56 percent) and the Burger Court (43 percent).”

The report notes that in the last term, conservative justices followed the Chamber’s demands in 77 percent of the cases in which the group filed amicus briefs. What may surprise liberals is that the four ostensibly liberal justices collectively followed the Chamber’s demands almost half the time — a statistic that exemplifies how loyalty to business transcends ideology on the court. 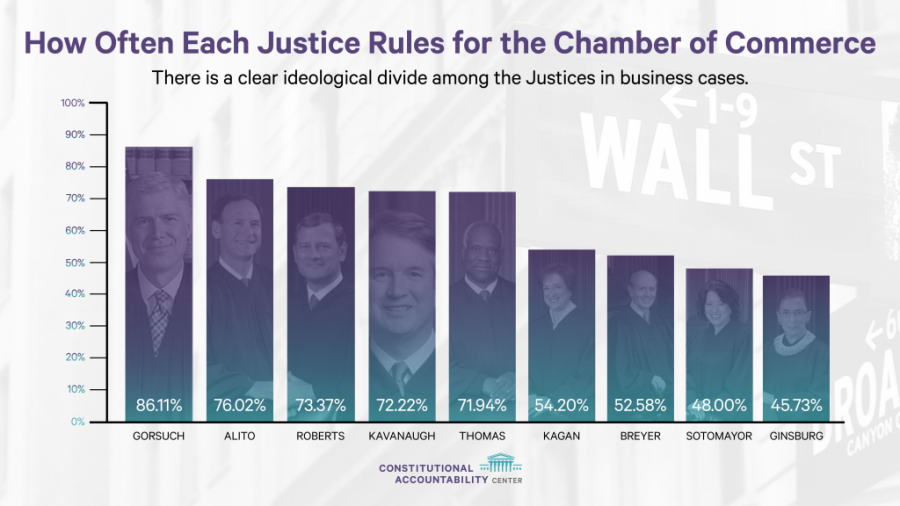 Why aren’t the Supreme Court’s plutocratic leanings more of a story in politics?

Part of it has to do with the nature of business cases — they are often esoteric and under-covered in the political media. Part of it may also have to do with how some of the business wins occur inside of cases that don’t seem to be about business at all. Indeed, in a 2018 Atlantic report, Boston College law professor Kent Greenfield and UCLA law professor Adam Winkler argue that in cases about sports gambling, cell phone privacy, abortion, and the First Amendment, the court set new legal precedents that will likely be invoked by corporate interest to strengthen their power.

Then there is also the issue of Chief Justice John Roberts. His reputation as a bipartisan swing vote has helped deflect attention from the court’s ultraconservative corporatism. But Roberts doesn’t deserve that reputation.

“With the court on the precipice of a dangerous lurch rightward, polling data indicate that Democrats have a positive view of Chief Justice John Roberts, who has expressed regard for precedent and concern for the court’s legitimacy, encouraging a view that he will step in to prevent partisan excess. Yet history suggests that Democrats have much to fear,” wrote leaders of the advocacy group Take Back the Court in a 2019 New York Times op-ed.

“The chief justice is neither a swing vote among his four liberal and four conservative justices, nor a moderate,” the group wrote. “Expect him to land time and again with the conservatives. . . . The chief justice’s voting record is as conservative as those of his most extreme current and former colleagues — Justices [Clarence] Thomas, Samuel Alito, Brett Kavanaugh, and Antonin Scalia. In all forty-two split-decision cases that the chief justice has presided over involving racial minorities, immigrants, workers, and abortion, he voted for conservative outcomes 100 percent of the time.”