My post on neoliberalism is getting a fair amount of attention on social media. Jonathan Chait, whose original tweet prompted the post, responded to it with a series of four tweets: 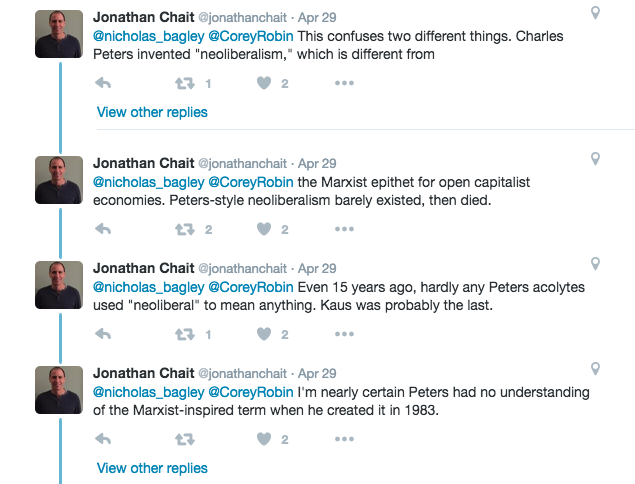 The four tweets are even odder than the original tweet.

Well, no, I don’t confuse those things at all. I quite clearly state at the outset of my post that neoliberalism has a great many meanings — one of which is the epithet that leftists hurl against people like Chait — but that there was a moment in American history when a group of political and intellectual actors, under the aegis of Peters, took on the name “neoliberal” for themselves. That’s who I was talking about in my post.

Second, contrary to Chait, Peters did not invent the term “neoliberal” or “neoliberalism” in 1983.

According to scholar Dieter Plehwe, the first usage of “neoliberal” was actually by a Swiss economist in 1925 (there was an instance in 1898 as well, but Plehwe claims its connotation was rather different).

It was in the following decade that “neoliberal” took off as a term — particularly in France, where a group of mostly conservative free-market intellectuals met in 1938 to counter the democratic socialism and welfare-state liberalism on the rise in Western Europe and the United States. That group — which would coalesce after World War II as the Mont Pelerin Society, with Friedrich Hayek at the intellectual helm — made the word famous when they used it to describe their political project.

“Neoliberal” was also in limited circulation in the US around the same time, as the Cornell historian Larry Glickman pointed out to me in a Facebook thread. Anti–New Dealers deployed the term to emphasize the way FDR had transformed liberalism from its nineteenth century understanding (which was much more sympathetic to markets) into a “neoliberalism” that was too critical of the market and indulgent of the state’s intervention.

All of which is to say, “neoliberalism” preceded Peters and his magazine by several decades.

Third, the reason the earlier coinage matters (and some scholars will challenge what I’m about to say) is that one part of the program the original group of neoliberals set out at Mont Pelerin, however divided they were at times, does bear a resemblance to the “neoliberalism” often bandied around by the Left today.

Insofar as that was a program to roll back the welfare state and social democracy, to revalorize capital and the capitalist as a moral good, to proclaim the ideological supremacy of the market over the state (the practice is more complicated), “neoliberal” is in fact a useful term to describe a political program that has gained increasing traction around the globe in the last half-century.

(It’s also important to acknowledge that one of the reasons the term “neoliberalism” can be confusing is that outside of the United States, particularly in Europe, liberal has often meant support for free markets and a critique of the welfare state and social democracy. Inside the United States, liberal, at least throughout most of the twentieth century, meant support for the welfare state and state intervention in the economy. Get into a discussion about neoliberalism on Twitter, and you inevitably find yourself crashing on a beachhead of this confusion. Personally, I think it’s about as interesting and relevant as that Founding Fathers fanboy who’ll periodically pop up in a discussion thread claiming that the United States is a republic, not a democracy. I merely note it here in order to acknowledge the point and move on.)

Fourth, insofar as Peters and his group of neoliberals in the United States declared the fundamentals of their political program to be: a) opposition to unions; b) opposition to big government (except for the military); and c) support for big business, I find the term “neoliberal” to be useful not only for describing Peters and his crew but also for relating that crew to the overall program of neoliberalism.

(Incidentally, if you think I’m being unfair to Peters-style neoliberalism, I urge you to read his 2007 interview with Ezra Klein, where Peters reiterates the basics of the program as I outline them here and in my post, and says, forthrightly, “I think in many, many areas, the neoliberals, in effect, won.” That is, they changed liberalism. The only plank of the original program that Peters thinks needs to be pursued more forcefully is crushing teachers unions and means-testing mass entitlement programs like Social Security and Medicare.)

Fifth, the inspiration for my post, as I said, was a tweet from Chait in which he professes an impish disbelief in the term “neoliberal,” as if it were a made-up word of paranoid leftists used to abuse liberals like Chait. And in this series of tweets, he doubles down on that disbelief, claiming that Peters-style neoliberalism had at best a shadowy half-life in the magazine world; it “barely existed,” tweets Chait, “then died.” No one’s called themselves that in ages, so it can’t mean anything at all.

In my post, I claimed that one of the reasons contemporary writers like Chait write from this state of amnesiac euphoria — where they fail to recognize the distance they’ve traveled from the midcentury world of labor liberalism — is that they’ve so completely absorbed the neoliberal critique that they can’t even remember a time when liberals thought otherwise.

It turns out that that wasn’t quite fair. There was a journalist back in 2013 who recognized precisely what I was talking about. Here’s what this writer said about the impact of neoliberal magazines on traditional Democratic Party liberalism (h/t the guy whose Twitter handle is HTML Mencken):

Those magazines once critiqued Democrats from the right, advocating a policy loosely called “neoliberalism,” and now stand in general ideological concord.

Why? I’d say it’s because the neoliberal project succeeded in weaning the Democrats of the wrong turn they took during the 1960s and 1970s. The Democrats under Bill Clinton — and Obama, whose domestic policy is crafted almost entirely by Clinton veterans — has internalized the neoliberal critique.

The name of that writer was Jonathan Chait.