There is state funding of political parties in Greece, with public funds apportioned according to the share of vote at the previous general election.

There are also, as in the US, political adverts on commercial television. That’s in addition to the legal requirement on channels to carry the 10 minute party election broadcasts and other statutory coverage to which every list standing in the election is entitled.

A quick scan of the parties’ 30 to 90 second commercials reveals a lot about where they stand and where this election is heading.

Cloud breaks, sunshine starts to burst through. Recovery from despair. The image? Cars.

Speeded up, shiny cars at nighttime, shot long exposure, their lights tracing the outlines of Syntagma Square, home to the Greek parliament. Syriza has the support of a large swath of cultural critics and of the intelligentsia. Is this some in-joke homage to Jack Kerouac’s “whither goest thou, America, in thy shiny car in the night?”

Then,  cue . . . more shiny cars, but in daylight, speeding along on the main national highway.

The commercial certainly accords with political advertising wisdom — keep it simple, don’t introduce complex ideas (or any ideas, if you can help it) nor anything which might lead to open-ended discussion, especially if you are ahead. There’s a compelling logic in that, whether you think that it is superior, but conventional, professionalism or iconoclastic “counter-politics” which is the better way not only to win the election but to muster the forces of the Left for the confrontations which will ensue, whatever its outcome.

I understand the logic, but I am perplexed by the abundance of automobiles. And I shall never forgive Syriza for spurning the chance to soar to victory on the wings of Jimmy Cliff’s “I can see clearly now the rain has gone!”

I dread to think what price we will pay for letting that historic opportunity slip.

The Right’s “we are building the playing field [for the nation]” effort has to go down as the most ill-thought-out gobbet of political propaganda since George H. W. Bush’s “no new taxes” slogan.

A group of high school students is playing football in an urban space. It’s a very sanitised space, lacking the spray painting and posters that festoon every one I’ve seen in Athens. And the half a dozen lads are . . . well, there’s no delicate way to put this, the whitest, fairest-skinned collection of youngsters I’ve ever seen anywhere in southern Europe.

If the connotation were simply the cutesy, freckled Milky Bar Kid or the German boy who had the Kinder Surprise gig, then it would just be naff. But the dreamy — yet also steely — gaze that’s branded on these poor kids as Samaras has a “friendly chat” actually brought flashbacks of that scene in Cabaret where the brownshirts take over the bandstand and a cherubic, Nordic, teenage soprano belts out “Tomorrow belongs to me.”

An avuncular Samaras picks up the ball, the creature of the night looking somewhat out of place in bright daylight. One of the boys tells him that his father is having a difficult time.

At the end of his homily, which captivates his young audience (whatever these kids were paid for this number, it was not nearly enough), comes the punchline:

“You see, we are building the playing field [for the nation],” says Samaras, “That is what you must say to your father.”

Patronizing is but a quarter of the problem. The whole thing was a predictable public relations car crash.

For this is the government which has — by hiding behind the fact that this is the first January general election since 1936 — disenfranchised 100,000 young voters (not unlike the football players in this ad). Normally every school student in their third grade of lycee (the rising-18 cohort) gets to vote. The minister responsible for the administration of the elections was told that the early election meant that electoral rolls would have to be revised.

He was given no less than three simple ways this could be done to ensure that these young voters got their democratic rights. He did nothing and then went on to claim that nothing could be done for “technical reasons.”

The actual reason is clear to everyone in Greece. Syriza is overwhelmingly the most popular party for voters under the age of 25. For first-time voters the only question would be whether a fair number might vote for the radical anti-capitalists who are standing on their own list. Out of 100,000 young voters, New Democracy and Pasok would be lucky to get an obscenity scrawled against their lists of candidates.

Unsurprisingly, the main impact of Samaras’s ad was to provide rich material for memes and spoofs which continue to circulate frantically with countless hilarious tweaks.

“If your parents don’t vote for me, I’ll not give you your fucking ball back,” was an obvious early contender.

Samaras: “Because you would vote for Syriza, you little piece of shit.”

It’s an indication of the contempt in which Europe’s politicians and the echo chamber of mainstream commentary hold young people that more has not been made of this anti-democratic scandal.

The dilemma facing Pasok is two-fold: all of its public faces are both faded impressions of the party’s old greats and, in so far as they have recognition, are detested by most of their erstwhile voters.

So fair play to the party’s communications team for making an imaginative effort with the appalling hand they were given.

Their solution to the party’s existential dilemma and crisis is to run an ad which does not feature the party leader, any party figure, or member or portray any human being at all.

Minor parties have previously run with that style, especially self-conscious leftists who mistake having a presentable leading figure for a cult of the personality. But I’ve not see it from a party which is used to its leader being prime minister.

Instead of any human interest, a series of rather forced slogans crescendo to a message which amounts to — we are nationally responsible and we will keep Greece in Europe.

The political line of the Communist Party is pitched perfectly with every note struck by a popular folk singer who does the voice over.

The “laiko” or people’s musical form is a long way from the stereotypical, plate-smashing pap once pumped out in dodgy, not-so-Greek restaurants.

For my money, it’s far richer than Portuguese fado, vaulting from the aching longing for lost love (or for homeland, due to exile) to the molten eroticism of tango.

The decades of exile following the civil war of the 1940s continue to give the Communist Party a moral authority among old proletarian cadres and their families.

I hasten to add that the KKE does not do molten eroticism. And there is no hint of such petty-bourgeois licentiousness in the doleful soundtrack to its ad.

“Everything is a lie,” he sings. “Everything is deceit,” as we are led through clips of Samaras opposing the first memorandum in 2010 (then, of course, imposing it and its successors when in office) and of Alexis Tsipras seeming to promise a rupture with the euro-austerity and then to a pledge to stay within the rules of the euro.

They will tell the people anything. They are all liars. Only the Communists are with the people and with the truth. “Vote for a strong KKE” is the only choice for the popular masses.

It is very easy to mock the “ourselves alone” line of the KKE. But it will end up with something like fifteen MPs.

Its equation of Syriza and the Right is ludicrous. But it speaks to a Greek working-class electorate with an acute ear for inconsistency and politician-speak.

The KKE used to speak to much more of the working class than the current 5 to 6 percent share of the national vote. It was the party of the Greek working class for most of the last century.

The traumatic history of Greek Communism is the history bearing down on what is set to be a Syriza-led government.

The Independent Greeks — the national-chauvinist anti-memorandum party struggling to get 3 percent — has followed New Democracy down the path of what at least technically amounts to child exploitation.

This time Panos Kammenos is the dodgy man who is on hand to help a young boy play with his train set.

“The train needs to stay on the rails. You have to know when to slow down and when to speed up,” Kammenos advises the little lad, as he helps him with the controls to an impressive Hornby layout.

That the party’s election managers authorized this — including several cutaways of trains entering tunnels is beyond me.

Perhaps it points to an “anti-Greek” conspiracy as convoluted as those which are routinely theorized by Kammenos’s anti-Semitic imagination.

The meaning of this weird electoral intervention becomes clear in the closing seconds. The boy’s mum appears and tells her son, “Alexi, Alexi — get on with it!”

The old bigot Kammenos (part of the big business family circle of the Mitsotakis clan, despite his faux, Faragist populism) should be returned to parliament so his guiding hand can show Alexi [Tsipras] when to speed up, when to slow down and how to keep the train of state on the track.

If Syriza’s impending victory were not already clear, the Independent Greeks just settled the question.

Indeed, today, Syriza has become the point of reference for all the parties of the would be center, as well as for Kammenos. Where previously they had orbited New Democracy and had echoed its line of fear-mongering against Syriza extremism, now they all pitch a variant of the same line:

“Vote for me because I can deal with Syriza and moderate them along the correct line.”

But as hope advances and fear recedes, it could yet be that enough people in Greece are prepared to give Syriza a mandate to govern with a line of its own. 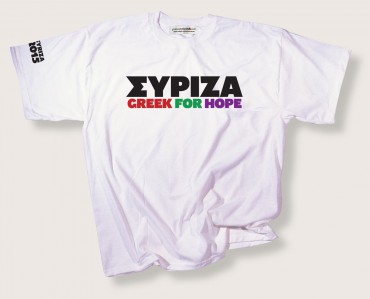 This reporting is funded by the sale of “Syriza: Greek For Hope” t­-shirts on Philosophy Football