By the 1960s, bankers around the world were whispering of a “Mexican miracle.” Only a generation removed from a bloody civil conflict, Mexico was booming.

After the Institutional Revolutionary Party (PRI) consolidated national power in the 1930s and ’40s, Mexico enjoyed decades of rapid economic growth, confounding economists who had predicted nothing but doom. Mexico City soon glittered with monuments and nightclubs, winning comparisons to European capitals. The Mexican hinterlands stood open for travel and investment, freshly crisscrossed by thousands of new roads. Universities churned out bankers and engineers while factories generated cars, textiles, and washing machines.

At last, in 1968, national elites felt ready to project a new image of prosperity and peace. An energetic lobbying campaign delivered the 1968 Olympic Games to Mexico City — the first successful bid for a Latin American city in history. With the Olympics, the PRI and their colleagues in the private sector intended to announce Mexico’s maturation.

With the country’s international reputation at stake, unrest could not be tolerated. Mexico’s ruling elite had already made clear that they were more than happy to sacrifice democracy at home in pursuit of prestige abroad.

Just months before the impending games, President Gustavo Díaz Ordaz issued a stern warning to the nation: “Mexico displays its enthusiasm for sport in a discreet, but resolute manner,” he wrote. Any displays of uncontrolled emotion —hard to avoid at sporting events — risked reminding visitors of Mexico’s earlier reputation as an agrarian backwater peopled by unruly townsfolk and marauding bandits. Even worse, any demonstrations against the PRI would threaten the party’s image as the benevolent steward of Mexico’s prosperity — an intolerable embarrassment for a party that projected itself as the natural and inevitable leader of modern Mexico.

Nothing, neither unruly fans nor loudmouthed dissidents, could disrupt the Games.

Elites soon seized on the opportunity to browbeat into submission those intransigent elements of Mexican society that lagged behind — or dared to question — the country’s newly minted modernity. “The Olympiad will confirm to us that we are now young adults; that it is now time to abandon our short-trousers mentality,” read an editorial in the PRI newspaper El Nacional. “It is good to make ourselves aware of this and the responsibilities that it brings.”

But there were some who would not be browbeaten. As the PRI poured $150 million (about $1 billion today) into Olympic preparations, a militant student movement emerged to challenge the terms of national development. Spurred by the military’s invasion of several preparatory schools in July 1968 to search for alleged gang members, the movement soon swelled in size and influence.

A National Strike Council (CNH) formed, uniting student radicals from seventy universities and preparatory schools across Mexico. Their demands were straightforward: an end to police and military impunity; the dispersal of the hated granaderos (tactical police); and the repeal of laws that criminalized protest, assembly, and political agitation. Then, just two months before the influx of international visitors was set to arrive, 50,000 students staged a march from the National Autonomous University (UNAM) in Mexico City. The military responded by occupying the campus, arresting dozens of student leaders.

Students across the country mobilized to prevent the seizure of more universities. Beginning on the afternoon of September 23, contingents of armed students at the Zacatenco and Santo Tomás campuses of the National Polytechnic Institute (IPN) successfully repulsed soldiers for twelve full hours. When their fortifications were finally overrun the next morning, the injured tended to one another in a converted chemistry lab while military vehicles rolled menacingly between academic buildings. A group of journalists on the scene relayed news of fifteen students dead, with dozens more injured.

The Olympics — scheduled for mid-October — were less than a month away. Elites wrung their hands with worry as the student movement regrouped.

On October 2, 10,000 students gathered in Mexico City’s Plaza de las Tres Culturas — a square meant to commemorate the convergence of indigenous, Spanish, and mestizo societies in Mexico — to protest the military occupations of the ipn campuses. Several detachments of soldiers assembled alongside the protestors, positioning themselves around the plaza’s perimeter.

The Plaza de las Tres Culturas is situated alongside and partially atop an Aztec ruin called Tlatelolco, whose black stone structures are sunk slightly into the earth but nonetheless stand open to the sun. A long apartment complex encloses one side of the plaza, and a Spanish colonial church effectively blocks off another. Despite being a public square, the place nonetheless feels confined.

Once the crowd had assembled, a group of student leaders began to address the demonstration from an apartment balcony. Despite the military presence, the demonstration seemed to be proceeding as planned. But then things changed. Grainy newsreel footage shows a green flare falling from somewhere high, glowing eerily as it lands at the edge of the crowd. There is a moment of chilling stillness, then it becomes clear: the flare was a signal.

Gunshots begin in a volley. The soldiers move quickly to hem in the protesters, herding them toward one narrow exit. There are machine guns on the roof of the apartment building, trained down at the crowd. Bodies fall and are trampled in the chaos.

The shooting continued for several minutes. When it was over, as many as three hundred students lay dead in the square. Inside the apartment building, a group of heavily armed men — each of whom, memorably, wore a white glove on his left hand — detained the student leaders who had addressed the crowd. The students were beaten, stripped to their underwear, and arrested. 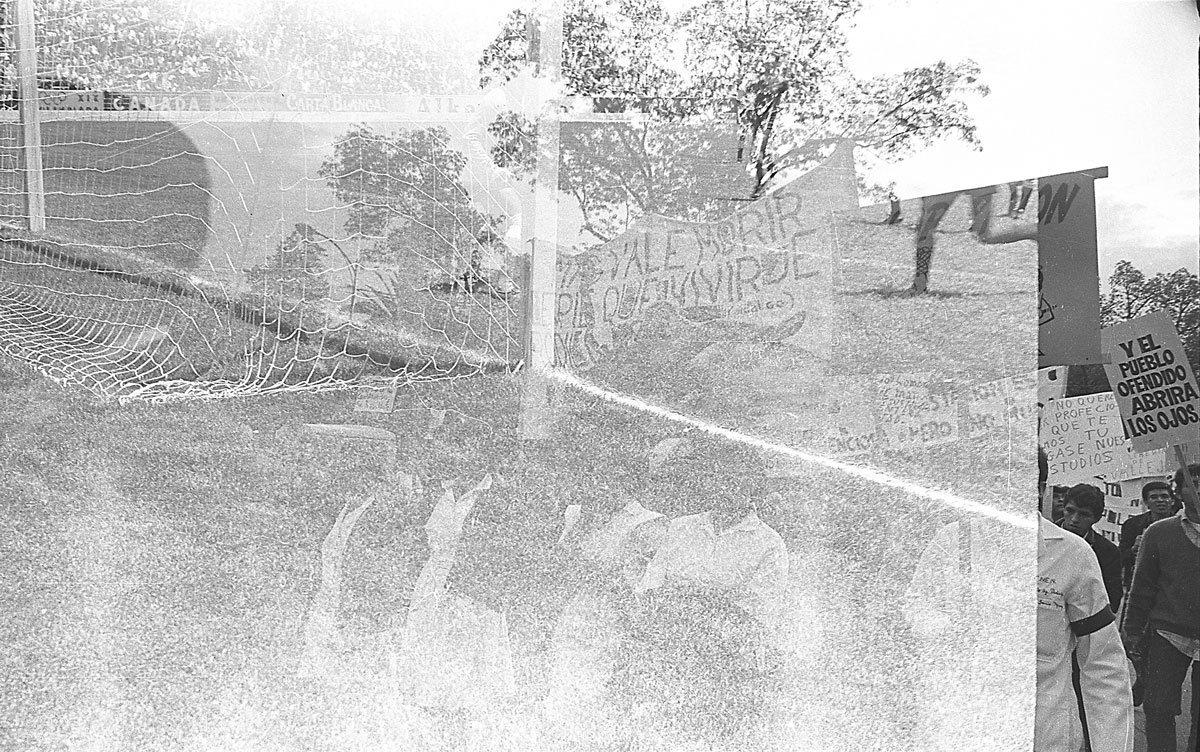 The Olympics began ten days later. A flood of international visitors — including the broadcasters who would succeed that year in transmitting the first color broadcasts of an Olympic event — arrived in Mexico. They saw a city adorned in banners and raining confetti, emptied of protesting crowds. Still, the Olympiad did not proceed undisrupted — athletes themselves, including American runners John Carlos and Tommie Smith, seized the international limelight to make highly public political statements. But the Mexican student movement, still reeling from the massacre, stayed quiet.

Mexico ’68 wouldn’t be the last time the Olympic Games elicited popular unrest that couldn’t be contained from above. In the lead-up to the 2016 summer Olympics, favela residents in Rio de Janeiro mobilized mass demonstrations against austerity and security policies that prioritized international perception over local well-being. In the seven years between the city’s successful bid and the arrival of international athletes in Rio, more than 2,500 favela residents were murdered by security forces.

The Tlatelolco massacre loomed large over the ensuing decades of Mexican political development. The PRI— whose leaders, together with their allies in the United States, were key architects of the atrocity — would remain in power until 2000, rounding out almost a century of uninterrupted rule. But the student movement of 1968 remained a lode-stone for generations of dissidents.

Years later, reflecting on the importance of that radical upsurge, essayist Carlos Monsiváis credited the massacred students with opening their country’s eyes to “something fundamental”; the massacre showed Mexico that democracy, in all its unruly glory, was “infinitely superior to a modernity selected by particular individuals or a particular class.”