As predicted, French voters split more or less equally between four choices, not counting the 20 percent who abstained. The political crisis has entered into the polling booths. Here, Roger Martelli reviews an unprecedented result.

Contours of the Electorate

An IFOP survey based on a sample of 3,500 people allows us a little better to discern the profile of the electorate. Firstly, age opposed — at the two extremes — a young electorate more tempted by Jean-Luc Mélenchon (26 percent of under-thirty-fives and 29 percent of eighteen- to twenty-four-year-olds) to an elderly electorate going to the traditional right under François Fillon (39 percent of over-sixty-fives, 34 percent of pensioners). 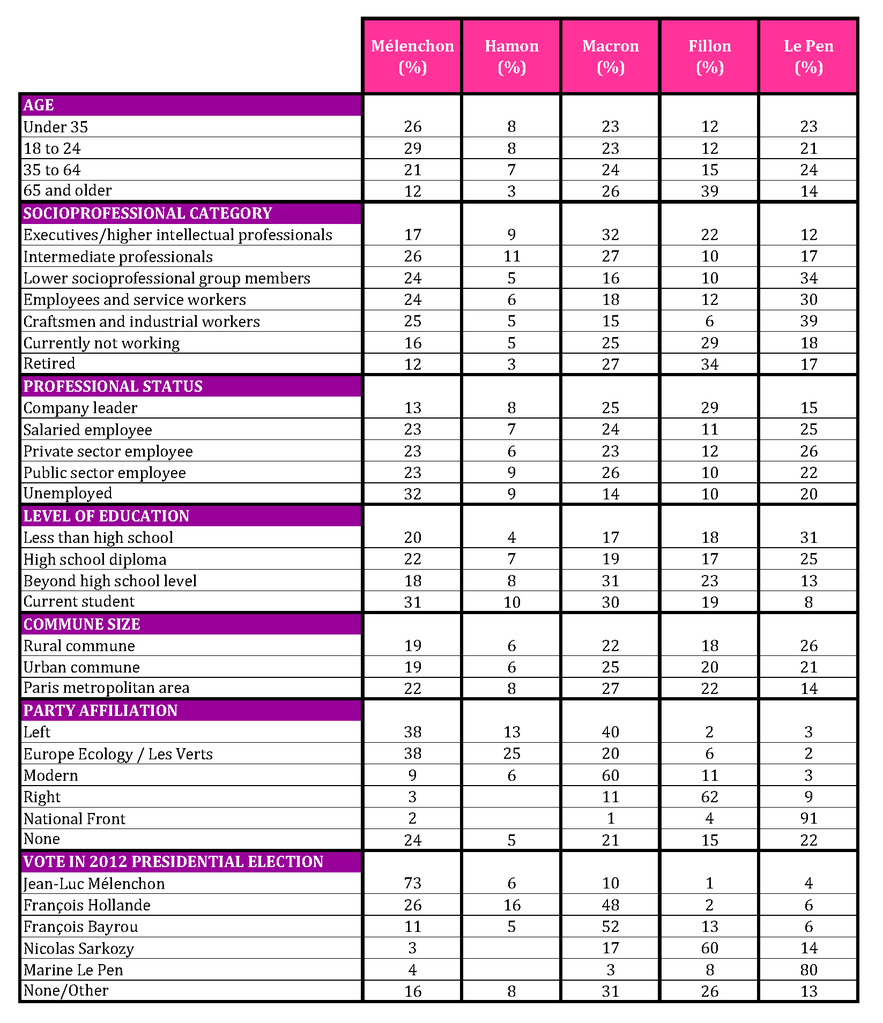 The breakdown within the different social groups is as shattered a picture as among the electorate as a whole. Nonetheless, we can note an over-representation of upper socio-occupational categories among Macron voters (32 percent of them vote for him) and of the lower ones among Marine Le Pen’s electorate. Jean-Luc Mélenchon’s situation is somewhere in the middle, attracting 26 percent among intermediate occupations and 24 percent among the lower categories. Emmanuel Macron and Jean-Luc Mélenchon share out the voters who are still in education, essentially meaning students (30 and 31 percent respectively).

Marine Le Pen is in first place in rural communes (25 percent), Emmanuel Macron in provincial urban ones (25 percent) and in the Paris urban area (27 percent).

For the most part, the voters closest to the political organizations of the Left (i.e., the Socialist Party, Communists etc., but not the Greens) are shared out between Emmanuel Macron (40 percent) and Jean-Luc Mélenchon (38 percent) with Benoît Hamon having to settle for a modest 13 percent. It is worth noting that despite the Greens’ decision to rally to Benoît Hamon’s candidacy, 38 percent of their sympathizers ultimately preferred the France Insoumise leader.

No candidate was able to recuperate all the votes they had received in the previous presidential race. In first place, in this ranking, was Marine Le Pen — attracting 80 percent of her 2012 supporters — followed by Jean-Luc Mélenchon (73 percent). Half of those who voted for François Hollande in 2012 chose Emmanuel Macron this time around, but a quarter went over to Jean-Luc Mélenchon. Here again, Benoît Hamon had to settle for a modest 16 percent.

Finally, the survey confirms that those who declare themselves “without party allegiance” split between Jean-Luc Mélenchon, Marine Le Pen, and Emmanuel Macron, with, it seems, a slight preference for Mélenchon (24 percent).

IFOP also offers an interesting profile of each candidate’s own electorate. Jean-Luc Mélenchon’s is young (almost one-third of them are under thirty-five) and working class (“populaire“) (one-third of them are in the lower socio-occupational categories) but educated (almost 40 percent have education beyond the baccalauréat [diploma at end of secondary education]). Three-quarters of them are closest to political formations of the Left, while 16 percent are people “without party allegiance” (not indicating any position on the left-right axis).

Emmanuel Macron’s electorate is older than either of theirs (25 percent are under thirty-five), less working class (populaire) (20 percent belong to the upper socio-occupational categories) and more educated (56 percent have post-baccalauréat education). Two-thirds situate themselves on the Left. 45 percent voted for Hollande in 2012, and more than 30 percent of them for the Right.

The data for the individual communes demonstrate the National Front’s extensive implantation. Marine Le Pen arrived in first place in almost nineteen thousand communes — almost 54 percent of the total. Emmanuel Macron had to settle for around seven thousand (20 percent), François Fillon for five thousand (16 percent) and Jean-Luc Mélenchon for around 3,500 (a little under 10 percent). The hapless Benoît Hamon had to settle for the very modest figure of sixteen communes — behind Jean Lassalle (seventy-eight)! 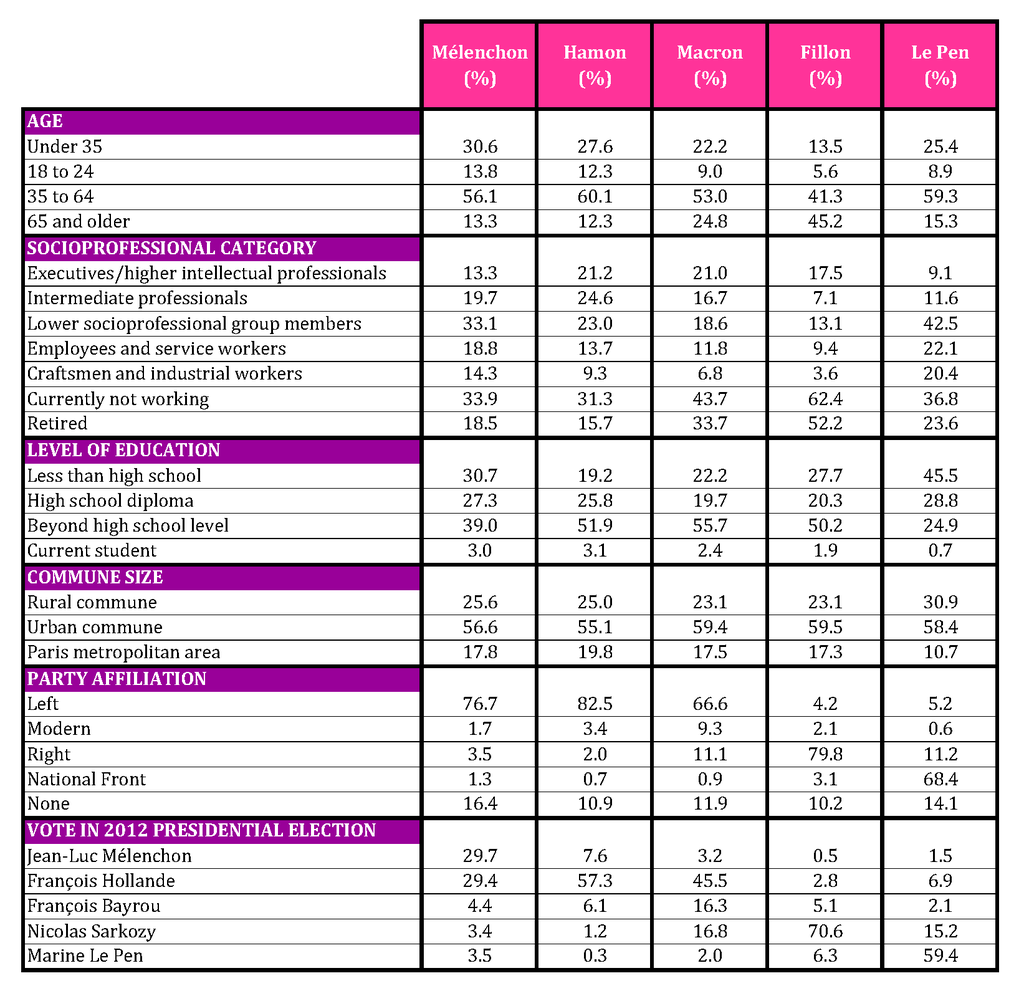 We get a changed perspective when we take account of the communes’ size. If we focus on the six hundred most populated communes (those with over ten thousand on the electoral roll) Emmanuel Macron and Jean-Luc Mélenchon achieve scores higher than their national averages (26.5 percent and 22.2 percent respectively), and François Fillon does a little better (20.7 percent) while Marine Le Pen falls sharply (16 percent). The Hamon-Macron pairing totals 34 percent, as against 30.4 percent nationally.

While Marine Le Pen and the Hamon-Macron total marked modest progress over Marine Le Pen and Hollande’s 2012 scores (adding 1.3 percent and 2.8 percent of the vote respectively), Jean-Luc Mélenchon gained a little over 10 percent of votes as compared to 2012. This was slightly stronger progress than his average increase nationwide (taking his 2012 vote as an index of 100, his score in these larger communes increased to 183, as against 174 nationally).

Developments in the metropoles are even clearer. Marine Le Pen was only in the lead in one (Toulon) and François Fillon in two (Aix-en-Provence and Nice) whereas Emmanuel Macron and Jean-Luc Mélenchon took the lion’s share: Emmanuel Macron came first in ten cities (including Paris and Lyon) and Jean-Luc Mélenchon in eight (Marseille, Toulouse, Montpellier, Lille, Le Havre, Saint-Etienne, Nîmes and Grenoble). 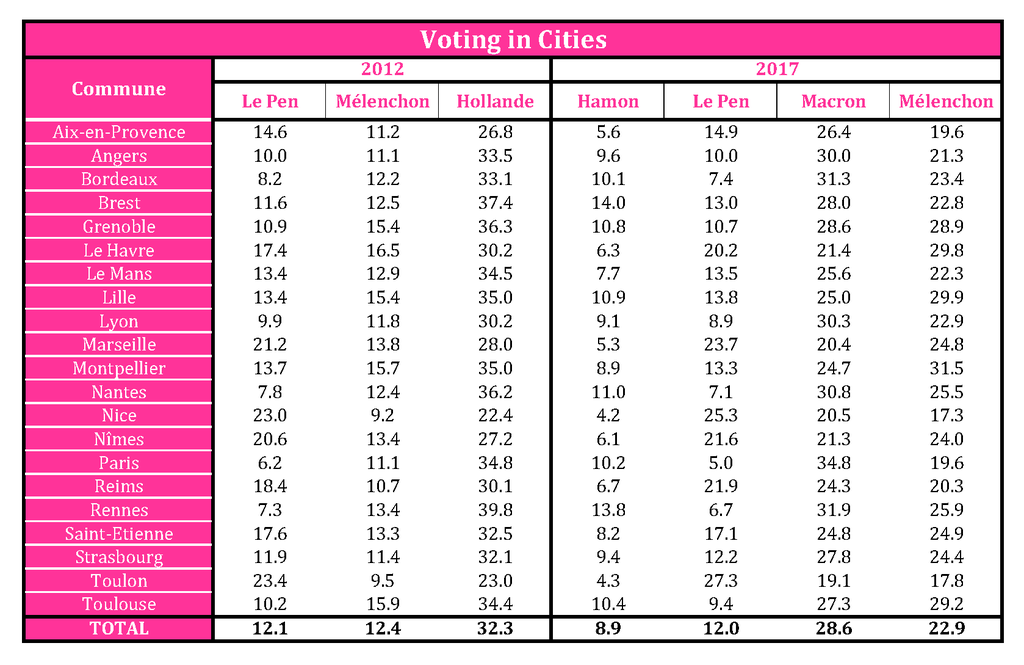 As in 2012, the dynamic in the metropoles was with Mélenchon. In 2012 he collected a total of 12.4 percent of votes across the twenty-one cities: this time he achieved 22.9 percent, here, too meaning greater progress than his national average (185, if we take 100 as an index for 2012). Conversely, Marine Le Pen’s progress was blocked, and her overall score (12 percent) was modest. As for the Hamon-Macron total, it made more modest progress (37.5 percent, as against 32.3 percent in 2012), an increase of less than one-fifth relative to the previous level. 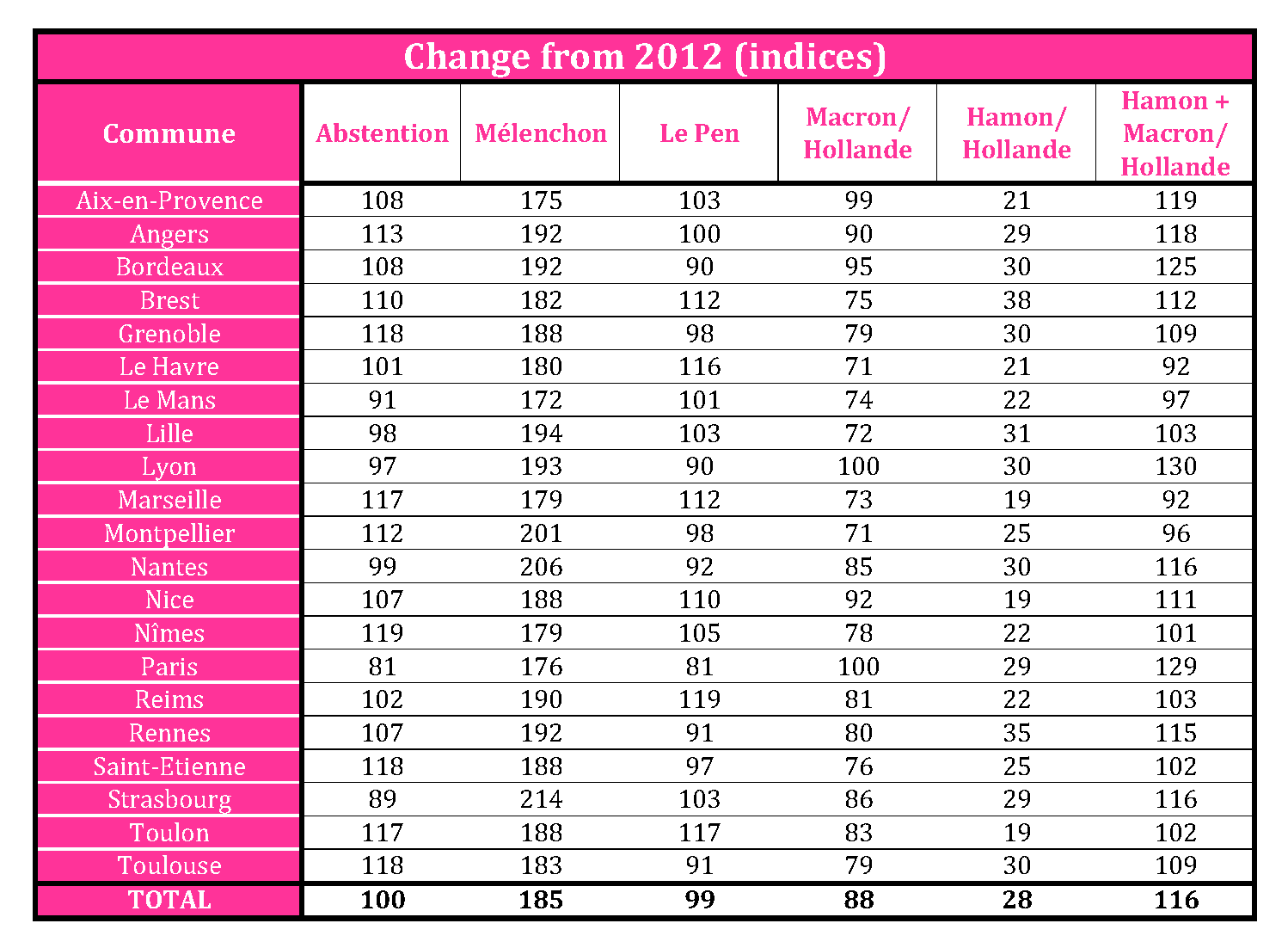 Analyzing France’s départements is also instructive. Once again Marine Le Pen confirmed the FN’s national implantation. With the exceptions of Hauts-de-Seine and Paris, she everywhere scored above 10 percent of the vote. She scored above her national average in fifty-five départements of continental France, and got over 30 percent in twelve of them in the north, east, and along the Mediterranean. Except in the Paris region, she made progress everywhere, and more than average in fifty-six départements.

But the most striking development is in the territorial distribution of Jean-Luc Mélenchon’s vote. He, too, re-affirmed the “nationalization” of his vote, which had begun already in 2012. While in certain départements before 2012 the Communist vote bordered on marginalization, at under 5 percent, the Mélenchon vote recovered the same spread the French Communist Party (PCF) had enjoyed before its electoral decline. In 2017 his vote varied between 34 percent in Seine-Saint-Denis and 13.6 percent in Haute-Corse; thirty-five départements put him above the 20 percent threshold, and none was below 10 percent. Unlike Marine Le Pen he made progress everywhere, even doubling his score in the Bas-Rhin, the Val-d’Oise, and Seine-Saint-Denis. He progressed more than average in thirty-six départements.

Taken as a whole, at the communal and departmental level Jean-Luc Mélenchon has entered into the electoral space that the French Communists once had, added to which (especially in the southwest) is an implantation closer to the traditional Socialist left’s.

The presidential-election sequence will doubtless have contradictory effects. It shows the great pregnancy of the National Front — now well-inserted into the fabric of France’s communes —  and yet simultaneously the limits of its expansion, especially in the urban context.

It has also revealed the fragilities of the classic right, a right which François Fillon wanted to anchor itself to a traditional radicalism. It achieved nothing but retreat, boxing itself into an aging political space. The Right is now torn between the temptation of the extreme (and this will partly depend on the National Front’s own internal dynamic) and the more “centrist” option that the right-wing primary had rejected. But for the moment it is a centrist variant, turning a little more to the Left, that has the upper hand.

The Socialist Party has already shattered. Half of the 2012 electorate chose the reassuring option of a center closer to the US or Italian Democrats than the centrist temptations of (France’s own 1946–1958) Fourth Republic. This option will not want for support within the current Socialist Party. But it will come up against the uncertainties of its territorial rootedness, the possible volatility of a composite electorate, and the foreseeable difficulties of an administration that vaunts its own liberalism. Will part of the Socialists join the radical left (the gauche de la gauche)? Uncertainty is quite appropriate, here.

So the key to the situation will largely depend on what happens on the radical left. Despite his bitterness on the evening of the first round, Jean-Luc Mélenchon’s gamble has paid off. He has stood aside from the unpredictable structures of the Left Front, created a movement around his candidacy, and established himself as a possible candidate for power. At a moment when the Socialists are in crisis, he has brought the balance on the Left back to the level it had before the dynamic driven forth by François Mitterrand.

With Mélenchon, the radical left is now capable of marking its stamp on the whole left, and in so doing giving the popular layers back their sense of social hope and their taste for equality. Even so, this demands that the radical left’s political organization is up to task, and that it can pull along a whole critical space, part of which still remained outside Mélenchon’s presidential dynamic. The months following the electoral wave will, indeed, be decisive in this regard.