Earlier this month, Finland launched its much-anticipated universal basic income (UBI) experiment. Media accounts of the new program have been roundly glowing, a fact not lost on Finnish leaders looking to build up the country’s image as Socially Innovative Finland.

Much of this positive international attention is justified. Finland is on the bleeding edge of an increasingly popular idea about how the welfare state should evolve. But Finland’s experiment has its dark sides as well, especially for those who are concerned that a poorly designed UBI could undercut the welfare state without truly liberating anyone.

The technical details of Finland’s UBI experiment are straightforward. Kela, the country’s social insurance agency, randomly selected two thousand Finnish citizens between the ages of twenty-five and fifty-eight who were receiving benefits from either the basic unemployment allowance or the labor market subsidy program. Typically, people enrolled in these two programs have been unemployed for long periods of time and therefore do not qualify for benefits from Finland’s more generous earnings-related unemployment benefit system.

Those chosen for the UBI experiment will receive €560 ($590) per month, an amount that effectively replaces the payments from the basic unemployment allowance and labor market subsidy. Unlike benefits from those two programs, however, Kela will dispense the UBI unconditionally for the next two years, meaning that recipients will continue to receive benefits even if they take up work.

The politics of the UBI experiment, as well as the story of how it came to be, are more complicated. While announced late last year, the UBI pilot program has its origins in a Centre Party platform plank that, after the 2015 parliamentary election, turned into an ambitious UBI experiment — only to be redesigned and pared back to create the pilot.

How that evolution happened, and the political fractures the UBI revealed along the way, should serve as a warning to the UBI’s left-wing proponents.

How the UBI Came to Be

In the six years leading up to Finland’s 2015 parliamentary election, the country’s labor market was rocked by a double-dip recession.

The global financial crisis of 2007–8 pushed Finland’s unemployment rate up from 6.4 percent in 2008 to 8.4 percent in 2009. Then, following a period of employment gains in 2011 and 2012, joblessness began climbing again in 2013 on the weakness of the country’s flagging electronics and paper industries. In 2014, Russia, one of Finland’s major trade partners, fell into a deep recession thanks to collapsing oil prices and international sanctions resulting from its annexation of Crimea. This depressed the Finnish economy even further, causing the unemployment rate to rise to 9.6 percent in 2015. Meanwhile, the moribund economy pushed the government debt level up from 40 percent of GDP in 2008 to 75 percent of GDP in 2015.

During the 2015 election, the Centre Party ran primarily on a platform of public debt reduction and job creation. Party chair Juha Sipilä promised to usher in reforms that would create two hundred thousand new private-sector jobs and boost the country’s employment rate from 68 percent to 72 percent. With more people in the workforce, Centre leaders argued, Finland could “stop living in debt.” Centre’s program set out to achieve its policy goals chiefly by reducing the country’s unit labor costs, liberalizing regulations, and increasing the retirement age.

Included among Centre’s job creation ideas were two sparse sentences signaling the party’s interest in conducting a UBI experiment: “Social security needs to be developed to secure the basic subsistence for each person as well as to encourage people to seek and accept work. The impact of a universal basic income system must be tested and developed through regional trials.”

For Centre, the UBI was about increasing employment by reducing the “welfare traps” that discourage people from working. It was not about giving workers the ability to exit employment or about reducing income inequality and poverty.

Centre won the 2015 election, securing 21 percent of the vote. Closely behind Centre were the conservative National Coalition Party (NCP) and the ethno-nationalist Finns Party, both of whom won about 18 percent. Shortly after the election, Centre — which has entered both left-leaning and right-leaning coalition governments in the past — announced that it had formed a bourgeois government, with Sipilä as prime minister and NCP and the Finns as junior partners.

Upon taking power, Sipilä got to work implementing the various proposals in Centre’s jobs platform. After months of tense negotiations that crescendoed in a nationwide strike, the prime minister convinced most of the country’s labor and employer organizations to sign a competitiveness pact that cut unit labor costs by around 5 percent; liberalized store hour regulations (allowing shops to stay open as late as they want); and passed pension reforms that raise the retirement age to sixty-five by 2027.

Sipilä also followed through on the party’s proposed UBI experiment. In the fall of 2015, the prime minister’s office called for researchers to submit bids to lead a national UBI pilot. A consortium of researchers headed by the welfare agency Kela secured the project. By late October, the researchers had begun reviewing the history of UBI experiments around the world and preparing basic income models for the Finnish trial.

By January 2016, the Kela researchers had finished their initial review, and in March, they published their recommendations for the Finnish UBI experiment. The research group initially proposed paying out a basic income to a random sample of 1,500 low-earning adults between the ages of twenty-five and sixty-three. The plan included a national sample as well as a regionally intensive sample intended to examine the effects of a UBI on the broader community. All participants would receive at least €550, but some would be allotted €600 or €700 (in order to study the effects of different UBI amounts). Crucially, the researchers’ proposal included workers and non-workers alike.

But when the government released the draft of its UBI experiment legislation last August, it was clear they’d found little to like in the researchers’ ambitious proposal. The regionally intensive sample had been eliminated; the varied payment amounts had been nixed; and the target population of all low-earning adults between twenty-five and sixty-three had been replaced with a new target population: all unemployed adults between twenty-five and fifty-eight who receive a basic unemployment allowance or labor market subsidy.

Just in case its intentions weren’t apparent, the government reaffirmed that the “primary goal of the basic income experiment is related to promoting employment.” As far as Centre was concerned, there was no reason to include low-earning adults already working or adults out of the labor force for reasons other than unemployment.

In December, the government’s UBI experiment was enacted into law. By early January — after Kela randomly selected two thousand people from its unemployment rolls and informed them of their mandatory participation in the experiment — the government had made its first monthly UBI payment.

And just like that, what started as the dream proposal of left-leaning wonks everywhere had, once filtered through the political process, mutated into the UBI-as-workhouse nightmare.

Politics of UBI in Finland

The Centre Party’s interest in the UBI did not form spontaneously in 2015. Various political groups in Finland have promoted the idea of a UBI since at least the 1980s, with the Left Alliance and the Green League leading the charge. In 2002 and 2015, opinion polls generally showed that the majority of members in each political party had a favorable view of a UBI.

The most recent polling on the topic, conducted in early 2016 after the government’s UBI experiment had been announced, provides a more detailed look at the partisan breakdown of UBI support. According to this survey, 51 percent of Finns back the idea of a basic income, but that support varies considerably across party affiliations and life status. 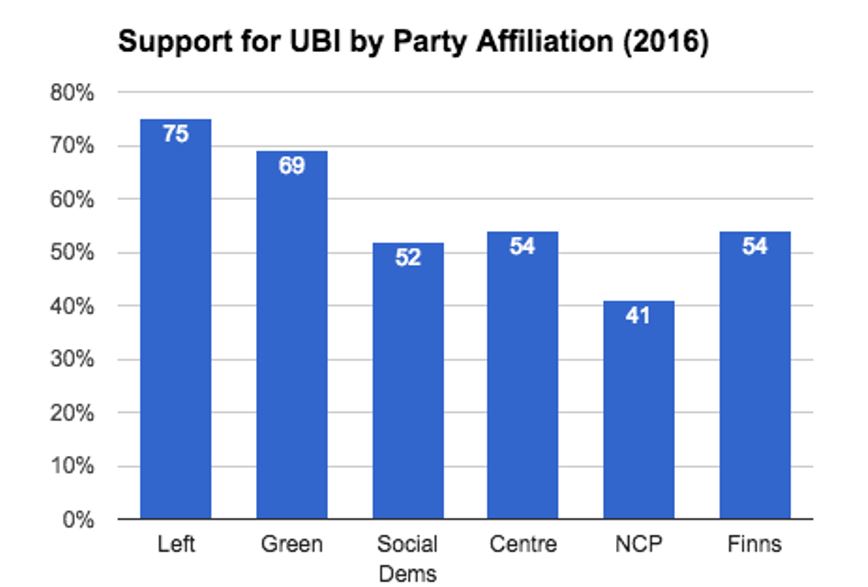 Members of the Left Alliance and Green League are by far the most enthusiastic — as they have been for as long as pollsters have been asking the question. The Left/Green faction, which skews young in Finland, promotes the UBI as a way of enabling people to pursue more autonomous personal projects by providing an income detached from the labor market and by reducing the state’s bureaucratic control over the unemployed and low-income wage earners. Although their pro-UBI rhetoric has differed from the government’s, the benefit levels espoused by the Left Alliance and Green League have been pretty close to the levels used in the current UBI experiment — ranging from Green League’s €560 per month to Left Alliance’s €620.

Not surprisingly — and in keeping with past polling — the National Coalition Party registers the least support for a UBI. The NCP is primarily the party of the conservative business and professional class. Its leaders have openly expressed fears that the UBI is a radical left plot to encourage able-bodied people to drop out of the workforce.

In Finland, unions are responsible for managing the country’s unemployment funds and benefit payouts. One of the reasons union density is so high is because workers must be union members to be covered by an unemployment fund. Replacing the current earnings-related unemployment benefit with a meager UBI would thus reduce the income security of unemployed workers and reduce the strength of organized labor, both of which are naturally anathema to the country’s historic workers’ party.

Despite being the party behind the current UBI experiment, Centre’s membership is quite divided on the issue, as their ideological orientation would predict. To the extent that Centre does support a UBI, it is as a tool to promote employment and encourage workers to take bad jobs with low pay. Another source of support is small-scale entrepreneurs from rural areas, a strong voter base for the party. Historically, these small business operators have had a hard time navigating Finland’s out-of-work benefits system, which was originally set up with wage-earners in mind. Finally, Sipilä, Centre’s leader, is a wealthy businessman with close ties to Finland’s tech sector, a community that’s touted a UBI in recent years.

In sum, then, the Finnish political landscape around the UBI has fractured in a fairly discouraging way. On the right side of the spectrum, there is an idiosyncratic ethno-nationalist party whose position on the UBI is mostly incoherent, a skeptical conservative party that is mostly opposed, and a centrist party whose membership is split on the idea and whose leadership is interested but for all the wrong reasons.

On the Left, the traditional party of workers and the welfare state remains worried that any real UBI policy would undermine unions and social insurance, while the far left adores the kind of liberatory UBI that looks nothing like the actual UBI experiment the government ultimately approved.

It would be wrong to draw too many conclusions from the Finns’ UBI experience. It is just one experiment, and the researchers involved have already started pushing for additional trials that are broader in scope. Determining what, if any, positive employment effects a UBI might have is a worthwhile endeavor.

Yet the form the Finnish UBI experiment has taken, and the way it came to be, should trouble UBI supporters on the Left.

It is technically possible to create a broad-based UBI that increases worker bargaining power and leisure while decreasing inequality and poverty, especially in a wealthy country like the United States.

But it is just as possible to redirect the energy behind a liberatory UBI into implementing a conservative one — forcing unemployed workers into bad jobs while undermining organized labor, earnings equality, and the welfare state.

Indeed, it is even possible to pull off such a bait-and-switch while convincing the rest of the world that you are engaged in progressive policymaking.