On Saturday, Australian voters delivered a federal election result so close (and still too close to call) that it cannot be used by any side to obscure the continuing breakdown of the country’s political order. Rather than giving a clear mandate to either the Liberal-National Coalition government or Labor opposition, the election results have, as Bloomberg put it, sunk Australia “into limbo.”

The election was the first at the federal level since Malcolm Turnbull took over as prime minister last September, following a Liberal party room coup against the terminally unpopular Tony Abbott — the fifth national leadership switch in six years.

Now there is a very real possibility that we will see another changing of the guard.

Even if the government reaches a numerical majority, internal party dissatisfaction with the Turnbull experiment may lead to a challenge against him in the short term. Already the influential Liberal-aligned columnist Andrew Bolt has demanded his resignation over the dreadful election outcome. The only thing saving Turnbull right now is the lack of a viable alternative.

Initially, Turnbull enjoyed stratospheric public approval and boosted the coalition government’s moribund polling. As time wore on, however, it became obvious that the switch was far more style than substance as the socially liberal Turnbull was forced to make deals with his party’s hard right in order to win their backing.

Voters, and to a much greater extent the media, welcomed a break from Abbott’s right-wing culture warrior persona. But Turnbull also proved unable to rise above the Right’s longer-term structural decline and inability to craft a coherent, popular agenda. In essence he was expected to be the kinder, gentler face of an exhausted conservatism that had made it into office almost entirely because of Labor’s implosion in 2010–13.

Turnbull was hemmed in by the need to keep his internal foes at bay and by the fear that any serious reform initiatives would result in electoral disaster. So he launched several apparently serious forays into “economic reform” (raising the consumption tax, reorganizing state and federal taxation arrangements) only to suddenly pull back and abandon them.

As polling drifted south for the government, Turnbull tried to re-establish political authority with a “double dissolution” election — a contest in which all seats in both houses of parliament are up for election, potentially producing a decisive mandate that allows passage of contentious bills by a joint sitting of both chambers.

This might have made sense when opinion polls looked rosy. But it turned out to be a poisoned chalice, as the “two-party preferred” total under the “preferential” (alternative vote) electoral system returned to 50-50 and stayed there for the entirety of one of the longest election campaigns in Australian history.

In the end all Turnbull could promise was that he had a vague plan for “jobs and growth” (which became “stability, jobs, and growth” as the polling started to portend another uncertain result). Yet neither the Coalition nor its Labor opponents could claim to have a program radically different from the other; both were mixtures of spending and cutbacks that put off fixing the growing budget deficit well into the future. Despite occasionally making populist gestures, Labor leader Bill Shorten was forced to admit that the programs his party had saved from Liberal cuts would have to be slashed if he won power.

Meanwhile, the drift away from the major parties became increasingly obvious.

The Greens recovered some ground from the drubbing they’d received for propping up the politically catastrophic 2010-13 minority Labor government. This despite having an uninspiring technocratic leader in Richard Di Natale, who seemed more intent on securing a power-sharing deal with Labor in the event of a hung parliament than recovering his party’s former anti-establishment edge.

Not once but twice he shot himself in the foot by suggesting that the Greens’ brand-defining refugee policy could be traded for governmental participation. In the end the party improved 1.3 percent over 2013, doing best in inner Melbourne (although its Senate vote was stagnant).

Bigger winners were populist minor parties and independents. In South Australia, the gambling reform campaigner Nick Xenophon saw one of his MPs dethrone a Liberal cabinet minister. The Xenophon team won over 20 percent of the lower house vote in the state, as well as at least three Senate seats. In an election night moment reminiscent of the political class’s befuddlement over Donald Trump and Leave, Deputy Prime Minister Julie Bishop told reporters she couldn’t understand why people would vote for a man who “opposes free trade deals” when such pacts had “done so much” for the deindustrializing state.

In Tasmania, left-leaning populist and former Iraq War whistle-blower Andrew Wilkie increased his margin of support, and right-wing populist Jacqui Lambie comfortably held her Senate seat despite the collapse of the Palmer United Party (PUP) that had put her there in the first place.

In Victoria, center-left independent Cathy McGowan easily stared down a challenge from the prominent conservative she had knocked off in 2013, while TV personality and anti-pedophilia campaigner Derryn Hinch won a Senate seat from which to make accusations under parliamentary privilege that have formerly landed him in jail. We can expect some very ugly anti-political posturing from him in the future.

And in perhaps the biggest shock of the night, the hard-right populist Pauline Hanson looked to be on course not just for a Senate seat of her own but to have two colleagues join her. Running on an openly anti-migrant and anti-Islam platform, Hanson has taken advantage of the unravelling of Australia’s center-right Coalition.

The Coalition has only had a lower primary vote than its current count on two occasions since World War II — the 1972 Labor landslide and in 1998, when Hanson’s One Nation party was at its peak. This year she seems to have mopped up some of the voters who had opted for the center-right populism of PUP in 2013, especially in Queensland, where the major parties have always been weakest and anti-political sentiment has been most prominent. 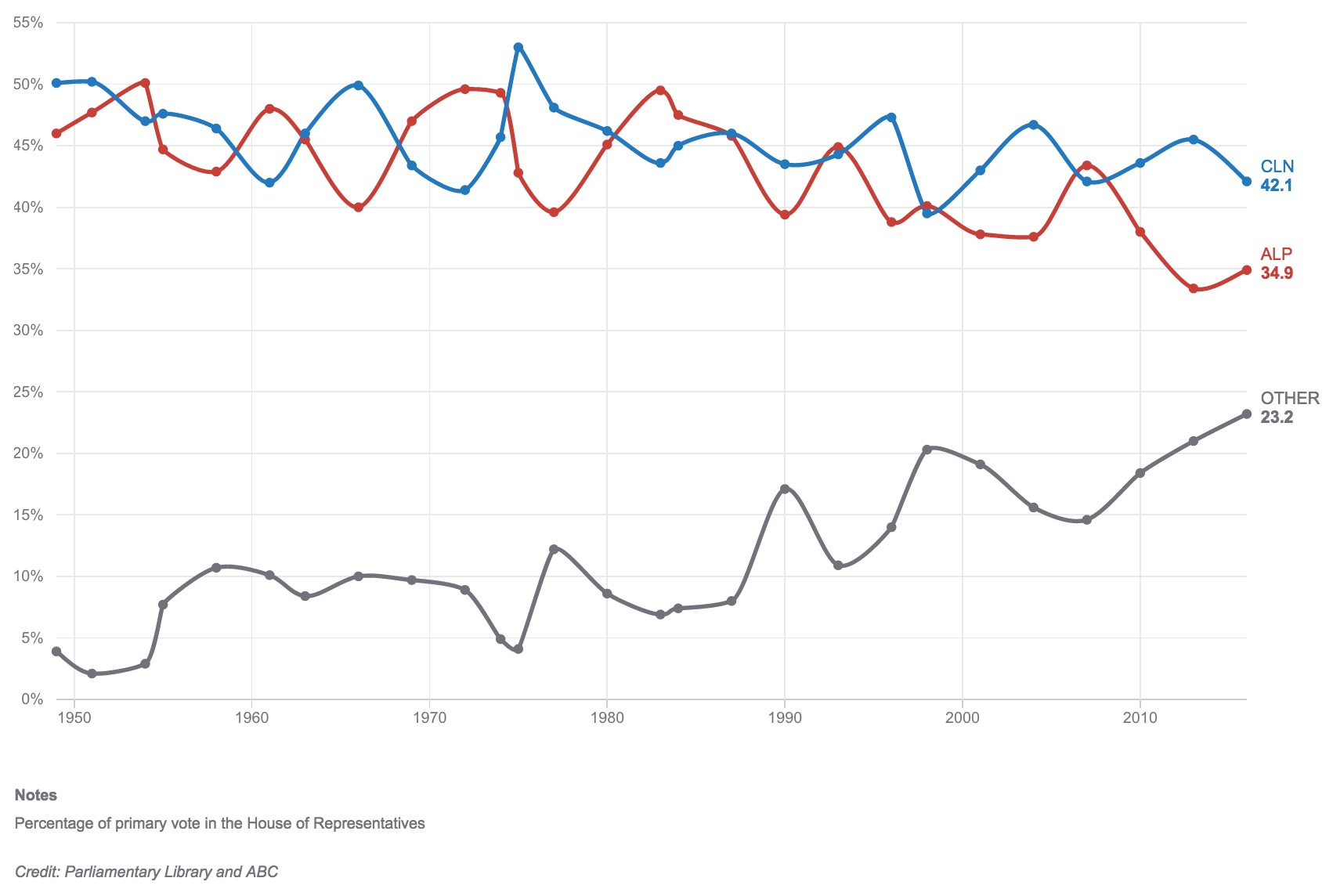 As the graph above shows, this election has delivered a further flight of voters from the left-versus-right party system that dominated Australian politics after World War II. This was the real story of the 2016 election campaign, despite the attempts of politicos and commentators to obscure it with a fanciful picture of polarization between the major parties. No amount of brand differentiation was able to cut through the high levels of voter disinterest and detachment as the weeks dragged on.

On election night, Julie Bishop claimed that “we’ve returned to the normal situation in federal elections, which are generally very close. I think 2013 was an utter rebuff of the chaos of the Rudd-Gillard-Rudd years, and now we’ve returned to a more normal pattern.” Yet there is nothing “normal” on display here — not in knife-edge elections (which have been historically rare), not in continuing political instability, and not in elites’ inability to herd voters into line.

For Labor, its better-than-expected two-party preferred and seat result wasn’t enough to overshadow its second-lowest primary vote since the Great Depression, a time when the party was split down the middle. Shorten is already facing jostling for the party leadership from his chief rival, Anthony Albanese.

Australian voters’ effective rebuff of the political class is the latest manifestation of a broader frustration with the operations of democratic governance. In an important longitudinal study, academics at the University of Canberra found that voters’ satisfaction with the way democracy is working declined from a high of 85.6 percent in 2007 to 42 percent in March of this year. The same study showed a marked drop-off in trust in politicians and further weakening of party loyalty among voters. Political parties are seen as some of society’s least trustworthy institutions.

Significantly, the Australian example continues to be one where political turmoil can’t be solely attributed to economic crisis and austerity, as the country never suffered a recession after 2008 and the unemployment rate has actually fallen from 6.4 to 5.7 percent in the last eighteen months.

It is also hard to blame the rift between people and politicians on “neoliberal” policies. Even in states like South Australia, governments have tried to cushion the blows of “globalization” with pork-barreling on a frighteningly cynical scale.

It is not some economic shift that has produced political crisis. Rather, it is the long-run decline and hollowing out of the social bases of the political parties (most importantly, the reduction of Labor’s trade union base to an ineffectual rump) that has led to their growing detachment from their former constituencies. This has made the antagonism between social interests and the political sphere even more obvious.

With the widening schism between political elites and ordinary Australians, voters are increasingly partial to referendums as a way to decide the major issues of the day. This could soon come to a head with the Coalition’s promise of a plebiscite on same-sex marriage, a legal change that has been blocked by political class games despite a decade of robust public support.

The most recent polling, taken just before the election, found that a large majority of voters — especially young voters, who are also the strongest supporters of marriage equality — want a popular referendum on the issue. For their part, Labor and the Greens have talked of preventing a popular vote, knowing that they can use the issue as a political football.

Of course, as in the case of working-class UK voters choosing Brexit, US workers voting for Trump, or even austerity-stricken Greek voters choosing “Oxi,” there is a sharp difference between certain socioeconomic groups destabilizing their political leaders through an official vote and those groups asserting their class interests. The 2016 Australian election has been another harsh vote “against” that doesn’t automatically translate into a movement “for” positive social change.

While neither the parliamentary right nor left can take solace in the results, those of us committed to more radical social change can gain a degree of clarity about the lines of division that have emerged. That at least places us in a better position than the mainstream of the political class, who are desperately trying to hold a leaky vessel together rather than recognizing it as no longer fit to sail.