Conspicuous consumption — the display of wealth as an expression of economic power — is not a new phenomenon but it has arguably never been as easy to practice. Social media has helped normalize it, providing a frame of competitive individualism and entrepreneurship in which the experience of affluence must be documented and shared online. Reveling in the thrill of a good purchase, the instinct is to share it with friends and followers online.

At the forefront of this display of wealth is a new class — the sons and daughters of the 1%, who have taken to displaying their parents’ fortunes on Instagram and Snapchat. Their photographs have subsequently been picked up and publicized through popular blogs such as Rich Kids of Instagram and Private School Snapchats.

In 2012 a series of media reports showcased the worst excesses of wealth flaunting — with a mixture of outrage and envy — and in the years since, the marriage between conspicuous consumption and social media has blossomed, even spawning regional versions such as Rich Kids of Tehran.

The images are knowingly crass and brazen; captured on camera phones, they are often hastily composed, making use of Instagram’s pre-set filters before being uploaded and shared on social networking websites with a string of predictable hashtags: #YOLO (You Only Live Once), #blessed, or #donthateappreciate.

While the medium transmitting the pictures is novel, the images and the social relations they represent recall earlier depictions of wealth, in particular oil painting popular amongst European elites during the seventeenth and eighteenth centuries.

These oil paintings were produced in a period marked by the consolidation of the mercantile bourgeoisie, an emerging class benefitting from expanded trading routes with the colonies. It was the age of the Grand Tour, when the noble sons of northern Europe journeyed through France and Italy in search of antiquity and the origins of European culture, on their way encountering art, music, and food, and enjoying occasional bouts of sexual revelry and wild drunkenness. The trips could last a few years, and often relied on seemingly unlimited funds from back home.

Like the photographs shared on Instagram, the oil paintings of this period call attention to the subjects’ prestige and status — and illustrate the role of depiction in asserting and reinforcing social privilege.

English art critic and writer John Berger’s groundbreaking Ways of Seeing — a 1972 BBC series that later became a book — challenged the pretense of neutrality in the Western Art canon by pointing out the ideological functions of these images. He argued that all images, from paintings by the Old Masters to advertising billboards, could be understood in terms of their social and political significance. Berger’s great contribution was not to show us how to read political images, but rather how to read images politically.

The following sketches, which bring together a selection of two distinct image species (European oil paintings from 1650–1750 and Instagram pictures from 2012–14), draw on Berger’s insights. A work of visual analysis rather than art history, the comparisons connect a culture of the present with one of the past — both in order to better understand the selections themselves, and the desperately unequal world that produced them.

Thomas Gainsborough’s Mr and Mrs Andrews is an iconic portrayal of the landed gentry in eighteenth century England. The painting celebrates a marriage between Robert Andrews of the Auberies and Frances Carter of Ballingdon House. Their union was arranged by their fathers and combined two adjacent family estates in Sudbury, Suffolk. 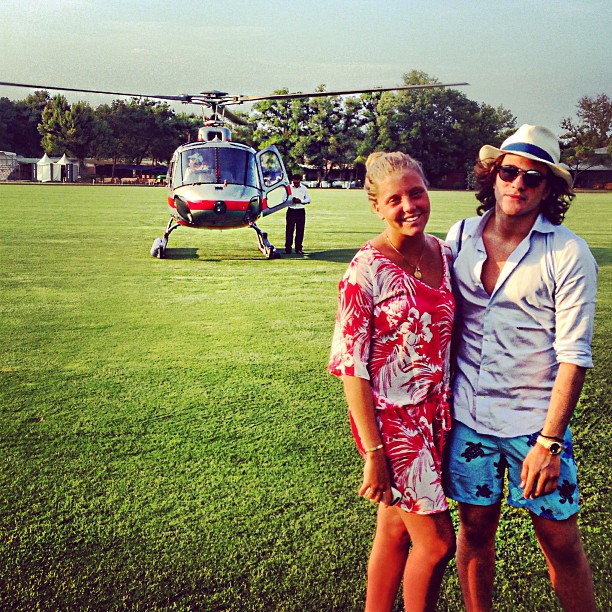 The painting depicts the power of perspective and the perspective of power — Andrews is lord of all he surveys. It is an example of the “outdoor conversation piece,” a group portrait in a landscape setting. The Essex landscape dominates the image. Sheaves of freshly harvested wheat are piled at the forefront, while in the background, separate enclosures of sheep and cows signal the progressive agricultural techniques Mr Andrews was known for.

His unbuttoned shirt and casual lean on the fashionable wooden Rococo bench could have been taken from an etiquette book advising gentlemen how to appear “at ease.” The look in his eyes is confident and proprietorial. Mrs Andrews, herself from a rich textile family of Huguenot origin, sits wearing a rustic shepherdess-style hat, while her dainty feet in pink satin slippers confirm her social position.

Wealth is again increasingly concentrated in the upper echelons of society. In his book Capital in the Twenty-First Century, Thomas Piketty contends that the period of relative economic equality enjoyed in the West in the few decades after World War II was a historical anomaly unlikely to be repeated. Inheritance is once again becoming the main route to the upper echelons in the West, and we are returning to the inequality levels of Mr and Mrs Andrews’ time. 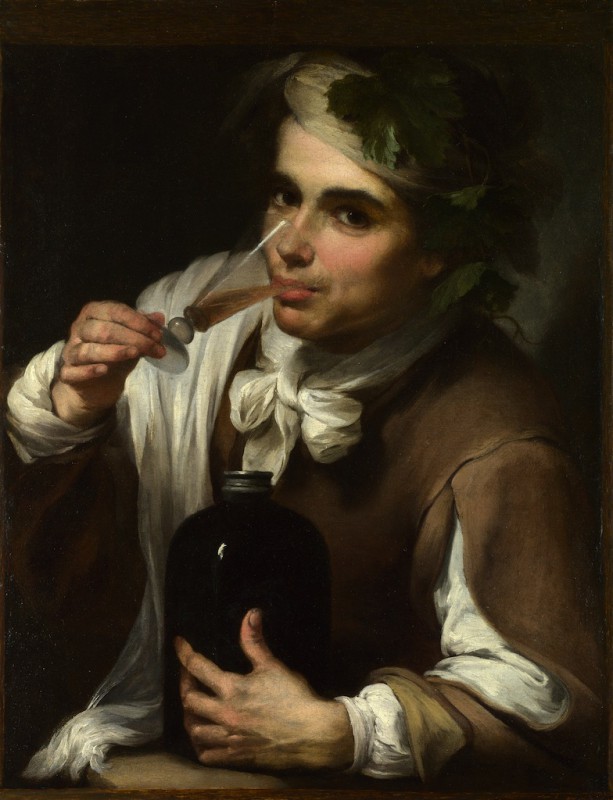 The young pair holding each other in the photograph above is Carlo Sestini Branca and his step-sister, Oona Ortmans. His uncle, Count Branca, is an Italian nobleman who heads the family’s famous distillery in Milan. Behind the couple is a green field in St Tropez, but the object on display is the private helicopter, not the land it rests on. This, along with the private jet, is their preferred mode of transport, carrying them from country estate to cocktail bar, penthouse to private island.

The couple smiles at the camera, their comfortable, casual dress — which speaks of a culture more informal than Mr Andrews could have ever imagined — tells us they have places to go: after all, standing obediently next to the helicopter in the background is the pilot, waiting to carry them away.

The young man in Bartolomé Esteban Murillo’s painting gazes warmly at us as he leans on a table, cradling a large bottle of wine and holding a glass flute to his lips. On his head a wreath of vine leaves suggests he is a modern follower of Bacchus, the Roman God of wine.

The serving towel draped across his shoulder probably indicates his servant position. Murillo frequently painted the destitute young children on the streets of Seville, whom he portrayed as carefree and happy — an expression of his view that we should be content with our social position in life.

The young Anton Thunberg, son of a Swedish multi-millionaire, is cradling a less temperate amount of champagne, signaling the penchant for excess. 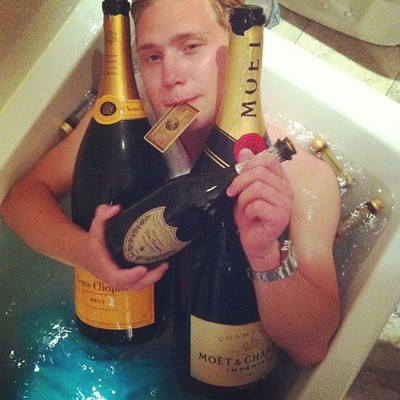 His lips are pursed not around a glass of wine but on the corner of an American Express Gold Card which hangs uselessly over the bottles; along with the Rolex watch, it is a bizarre assemblage of items to bring into a bathtub. He is holding almost seven litres of champagne altogether, including Veuve Clicquot, Moët and Dom Pérignon — a triumvirate of ‘celebrity’ champagne.

But this is not about taste or enjoyment. It is about the spectacle of pleasure — his satisfaction comes not from the wine itself, but from the knowledge that others realize he possesses it. Such is the logic behind “sinking,” the fashionable practice of ordering two bottles of champagne and having one poured down the sink — a display of braggadocio signifying disdain for cost and a gratification in denying others the experience of wealth rather than sharing it.

The photo is indicative of the contempt in which the Rich Kids of Instagram hold the less wealthy. The slogan “You can’t sit with us” is a frequent tagline to their photographs, as are the insults “peasant” and “insect.” Private School Snapchats displays particularly British examples of class hatred, including a photo of a “Chav Hunting” medal and one comparing state schools to Auschwitz.

This contrasts with Murillo’s decidedly more paternalistic view of the poor as sanctus pauper. Murillo’s portrait at least depicts a moment of pleasure and enjoyment; unable to experience the delights of the baccanale because of the credit card jammed in his mouth, young Anton is hardly a scion of the god of wine. 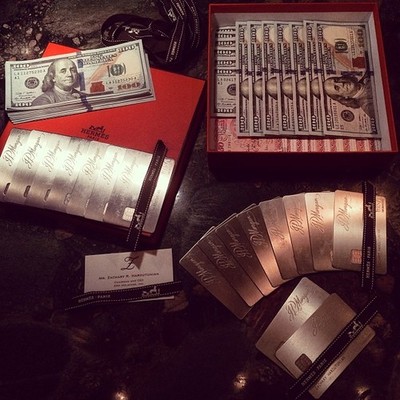 “Money has never made man happy, nor will it. There is nothing in its nature to produce happiness,” wrote Benjamin Franklin, whose countenance adorns each of the $100 bills that are stacked neatly in the luxury Hermés box in the photograph. Flimsy ribbons lie over the crucial digits of the J.P. Morgan Palladium cards, decoratively fanned, teasing us. Palladium cards are reserved for clients with holdings of over $25 million in liquid assets (“the card for the 1% of the 1%” according to Bloomberg View).

It is an obsessive arrangement that recalls the way a young boy might neatly line up his collection of toy figurines in his bedroom. An exposition of commodity fetishism: the owner of this paper and precious metal (the cards are made of palladium and gold) is transfixed by the value he sees locked in the objects themselves.

Cultural prohibitions against the flaunting of wealth were dominant in earlier epochs. In the fifteenth century, Dutch painters would sometimes mark a skull in the back of portraits of their affluent sitters to remind them of life’s ephemeral nature and its earthly pleasures. 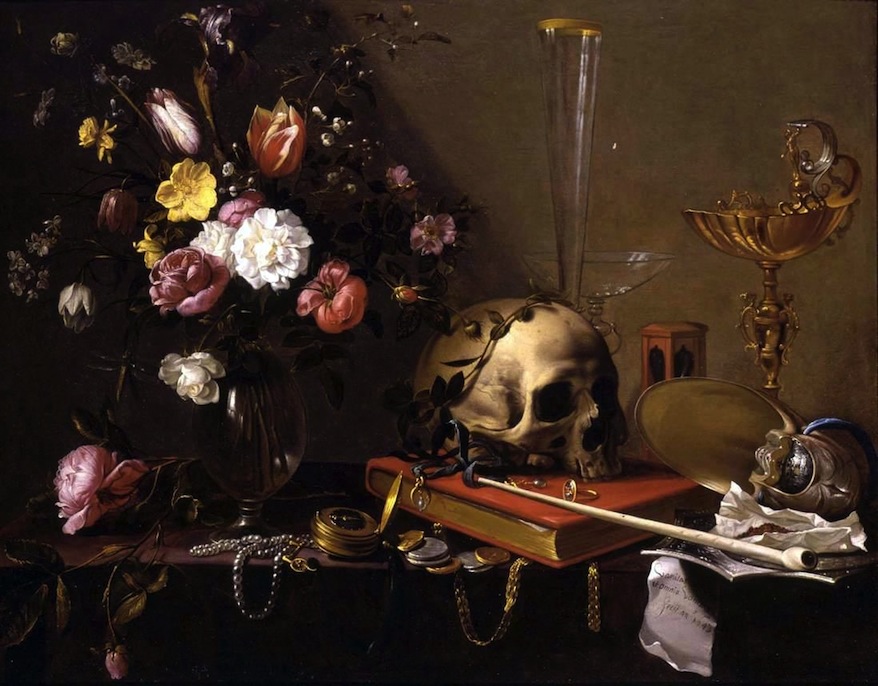 The Instagram photographs represent an affront to the traditional Dutch Vanitas paintings, popular in the Netherlands in the sixteenth and seventeenth centuries, of which Adriaen van Utrecht’s painting is a fine example.

The painting carefully places symbolic objects: material wealth in the chalice, glassware, and coins; intellectual and cultural pursuits in the book and flute; transience in the timepieces and the bouquet — and the wilting rose bud hanging on the front edge of the table that whispers, “All flesh is grass.” The skull as memento mori reminds us of the constant company of death and its function as “the great leveller.”

The photograph, by contrast, is devoid of such heavy symbolism: it is literal in its sterile display. This is not death but deadness, a cold and inhuman sensation. There is no time in the photograph, no life or death, only the instruments of capital.

The wasteful and profuse luxury depicted in the photographs above reflect the insatiable need for constant growth — the boundless, directionless quality of the drive to accumulate, possess, and consume. The current system encourages and facilitates this disposition in an increasingly narrow section of society.

These decadent lifestyles stand in stark contrast to the principles of austerity being forced on the vast majority in the West’s recession-plagued economies. Amid deepening inequality, images like these can justifiably provoke anger: Lord Aleem, a nineteen-year-old, self-styled Rich Kid of Instagram from Birmingham, regularly posted photographs of his collection of luxury cars outside his home until four of his £500,000 fleet were torched by arsonists last year.

But alongside anger, these images of decadence can also offer the opportunity to imagine a very different world, where wealth is not simply defined by money and possessions but by good health, valuable experiences, and the strength of social relationships, a world where the competitive display of wealth is no longer practiced because luxury is held in common.