Going through some old files, I found copies of the Princeton Tory, which was Princeton University’s right-wing undergraduate magazine in the 1980s.

Today it bills itself as “a journal of conservative and moderate political thought.” Back in the day, the Tory ran articles in praise of abstinence and against the campus divestment movement. (“Although Jerry Falwell’s claim that [Archbishop Desmond] Tutu is a ‘phony’ is exaggerated, it is true that he has little support within South Africa. The image of Tutu as a prominent figure is a creation of the international community.”) It staged reenactments of Washington’s crossing of the Delaware. Nothing outlandish or outré; just a slightly fustier version of the campus right of the 1980s.

Most of the staffers were smart. Some, like the magazine’s founders Dan Polisar and Yoram Hazony, were scary: hardcore Zionists, Polisar and Hazony went onto storied if peculiar careers on the Israeli right; Hazony, once a close aide to Netanyahu, wrote a eulogy for Meir Kahane.

But what caught my eye as I was leafing through the magazine’s pages was a name on the masthead. 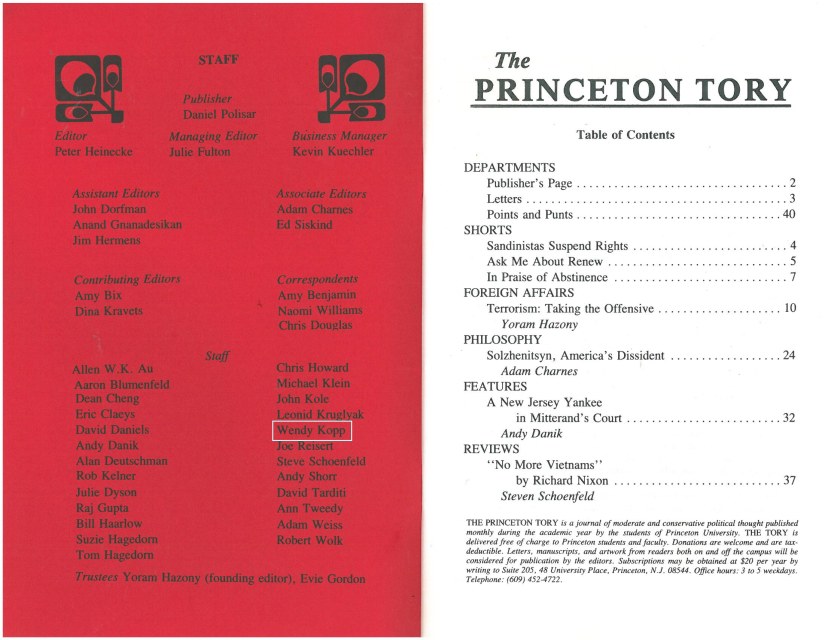 Wendy Kopp, in case you haven’t heard of her, is the founder and recently retired head of Teach for America (TFA), the controversial organization at the center of the country’s education wars. Diane Ravitch has been tangling with her for years.

Kopp came up with the idea for TFA while she was an undergrad at Princeton, and though its do-gooder image can seem at odds with the selfishness of the market, from the beginning Kopp has seen TFA as an emblem and instrument of capitalism and its hierarchies. With seed money from Mobil and Union Carbide (the public relations disaster of Bhopal still in its rear view mirror), Kopp announced in 1989 that “we really want to get the cream of the crop.”

Since I couldn’t find anything she wrote for the Tory, and their archive doesn’t go back beyond 2001, I have no idea what she was thinking when she joined it. She and I were in the same class at Princeton, and I met her in the first weeks of our freshman year (are you noticing a pattern to my past?) We worked together as stringers for newspapers and wire services across the country. But beyond her telling me, proudly and repeatedly, that she was a “corporate tool” (the phrase, I think, was just coming into vogue), I have no idea what her political views were.