Donald Trump and his Republican allies have epically botched the response to the pandemic. This is not in dispute by anyone who is being even vaguely honest about the situation. What is in dispute is whether or not we will do what’s necessary to learn from the mistakes and malice that defined this dark moment in history. And if you pay attention, you can detect the nascent effort to make sure that we will not learn anything.

In specific, you can hear the quiet but steady drumbeat that could set the stage for a cover-up — one designed to quarantine all the inconvenient facts at a safe social distance from the power elite that made this mess so much worse than it had to be. 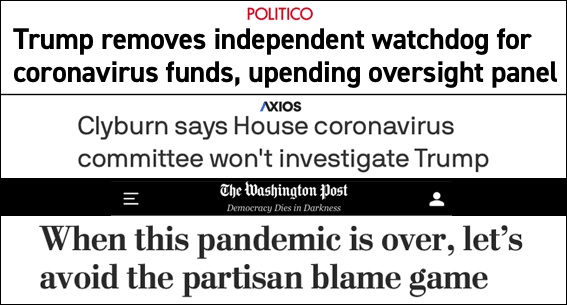 This push for a cover-up is coming from the Trump administration, from Democrats in Congress, and most recently from a former Bush administration official who has been insisting that there is “near zero lethal risk” in sending kids back to the college he leads — and who probably doesn’t want to face consequences if things go bad.

In this whodunit, keep in mind one timeless axiom: the call for bipartisanship is the last refuge of scoundrels who don’t want to be held accountable for anything.

Congress and Trump Begin Making It Harder to Hold Anyone Accountable

The bipartisan move to prevent accountability began last month when Congress passed a grotesque corporate bailout without a recorded vote.

“The new law would absolve the board of the requirement to keep minutes to closed-door meetings as it deliberates on how to set up the $450 billion loan program,” Politico reported. “That would severely limit the amount of information potentially available to the public on what influenced the board’s decision-making. The board would only have to keep a record of its votes, though they wouldn’t have to be made public during the coronavirus crisis.”

Trump then moved to undermine the already pathetically weak oversight panel charged with monitoring the bailout funds, and House majority whip James Clyburn promised that the panel will not “be looking back on what the president may or may not have done back before this crisis hit.” Meanwhile, the panel’s first report is supposedly due — but congressional leaders haven’t even named the panel’s chair.

Calls for Anti-Partisanship Designed to Marginalize Demands for Accountability

Now we seem to be moving into a new phase of a cover-up, one that uses themes of “bipartisanship” — or really, anti-partisanship — to try to create the conditions for blanket immunity.

First, there was a widely circulated op-ed by longtime Washington Post reporter Karen Tumulty that admitted Americans deserve answers about why we were left so vulnerable to such a predictable problem like a pandemic. She admits that answers “can come only from a credible, independent commission whose mandate is finding out why the government was caught so unprepared.” But then, in the spirit of anti-partisanship, she asserts that “there are two people ideally situated to lead the inquiry as its co-chairs: former presidents George W. Bush and Barack Obama.”

While it is almost certainly true that the Trump administration is most responsible for the immediate governmental failures right now, it is also true that any commission serious about finding answers and holding people accountable would also look back at the actions of the Bush and Obama administrations.

Having Bush and Obama lead any commission would use the patina of bipartisanship to set the stage for a cover-up of any facts or information that politically embarrassed them.

Tumulty’s piece laid the groundwork for Bush’s reentry on the national scene. Soon after, Bush — one of the most hyperpartisan scorched-earth politicians in American history — released a video telling everyone to be less partisan and less mad.

Donald Trump childishly lashed out at Bush while liberals praised the former president as a unifying statesman. Somehow ignored was the fact that Bush was effectively helping Trump by introducing the “bipartisanship” themes that so often marginalize enraged demands for accountability from presidents.

Bush, ever the politician, knows that the best way to prevent accountability is to use soothing bromides about unity and national purpose to tamp down the public anger that might metastasize into calls for justice and prosecution.

Now, only days later, there is a new Washington Post op-ed from former Indiana governor Mitch Daniels, a divisive partisan and former pharmaceutical industry executive who first made his name in the Bush administration that knowingly lied America into the Iraq War.

In his op-ed, Daniels doesn’t lament the hundreds of thousands of dead from that war, nor does he lament the incessant and blatant mendacity that defined the era. Instead, he cries about “the ugly Iraq War aftermath” when people were mad, and insists that “it is easy to imagine the coronavirus producing the same potentially deadly symptom,” which he calls “Hindsight Recrimination Disorder (HRD).”

“I want us to discover that this was the wisest course, that the ghastly price we’re paying was all worth it. But it’s the long term that matters. I can already hear the outcry claiming, ‘They lied to us,’” Daniels writes through crocodile tears. “Let’s not reprise Iraq. How about we self-vaccinate against HRD and all agree that, whatever comes, people right now are doing their best with the information they have.”

Daniels’s tenure as an Eli Lilly executive was marked by major lawsuits against the company alleging all sorts of corporate wrongdoing — so it’s not surprising that he seems generally allergic to accountability. His new essay isn’t merely crafted to distract us from Trump’s flagrant lying about the coronavirus emergency. It also builds off the “look forward as opposed to looking backward” ideology promoted by both parties as a way to justify avoiding holding politicians and political appointees accountable for anything. The idea is that it’s a waste of time to ever review what happened in a crisis.

Daniels is doubling down on that Orwellian mantra by suggesting that it would actually be bad to hold anyone accountable for governmental mismanagement and wrongdoing during a public health crisis that is killing tens of thousands of people. And, irony of all ironies, he’s making his case against accountability and transparency in a newspaper whose motto is “democracy dies in darkness.”

If Daniels and others successfully bury all the history of what happened and prevent a thorough investigation into what went wrong, the cover-up wouldn’t just protect Daniels’s Republican friends — it may also serve to protect Daniels himself from any day of reckoning.

Remember, Daniels parlayed his governorship into a plum job as president of Purdue University — and, in that gig, he is now pushing to quickly reopen the school by insisting that “the young people who make up over 80 percent of our campus population are at near zero lethal risk.”

If that proves to be incorrect, you can bet Daniels doesn’t want to have to answer any uncomfortable questions by any future investigators — and you can bet he will want the past to be buried in bipartisan silence.

Hyperpartisanship Is Bad — But a Lack of Accountability Is Worse

After all, who wants to live in a world where the parties are extremely bipartisan and nice to one another as they let government officials mismanage everything and fleece everyone?

Now, sure, you may read Daniels’s piece and wonder: yeah, what’s the point of looking back and holding people accountable?

Well, for one thing, we want a deterrent: we want public officials to fear that if they break laws, act unethically, or otherwise harm the public during a lethal pandemic, they will face some form of justice in the future from those looking back on their actions. That justice can be meted out in all kinds of ways — prosecution, firing, or at least public shaming in front of a national commission that has subpoena and discovery power.

But beyond deterrence, we should also want accountability in order to learn and grow as a society.

A country that doesn’t hold accountable those who lied us into the Iraq War is a country that effectively says it is fine with being lied into any war in the future.

A country that doesn’t hold accountable those corporate executives who created the financial crisis is a country that tells those executives they can continue fleecing us without fear of punishment — just as they have.

In short, a country that lets demands for bipartisanship create a cover-up is a country that refuses to learn from history — and then is doomed to repeat it.