Earlier this week, Senate majority leader Mitch McConnell suggested that states strapped by the demands of the COVID-19 crisis should declare bankruptcy rather than turn to the federal government for assistance. Whether a slip of the tongue or a genuine strategy, the suggestion was both audacious and revealing. McConnell, a Republican from Kentucky, was not arguing for fiscal restraint but in defense of a half-trillion-dollar aid package — almost all of it reserved for business assistance. According to his twisted logic, public entities should be subjected to “market discipline” (even in an environment of complete market failure) while those that are actually in the private market should be bailed out.

The federal refusal to provide unconditional funding to state and local governments amounts to nothing more than sharp-toothed austerity in stimulus clothing. The aid to states provided in the Families First and Coronavirus Aid, Relief, and Economic Security (CARES) Acts is targeted narrowly at propping up unemployment insurance systems or at meeting unanticipated pandemic-related expenses. But the pressing issue for states is not just ventilators and face masks, it is the collapse in state revenues. The shortfall is estimated at about $500 billion — twice as large as the hit to state budgets during the entire Great Recession.

This federal parsimony is part of a longer historical pattern. Outside of transfers for health programs, federal aid to state and local governments has dropped steadily since the 1980s. Much of this money is now block-granted, which both caps the federal commitment and gives states wide discretion on how to allocate the money. The Temporary Assistance for Needy Families (TANF) block grant, for example, has not increased since 1996 — a cut of almost 40 percent in real dollars. And none of this federal commitment carries with it any countercyclical mechanism, any guarantee that national lawmakers will step in to soften the blow of a recession. 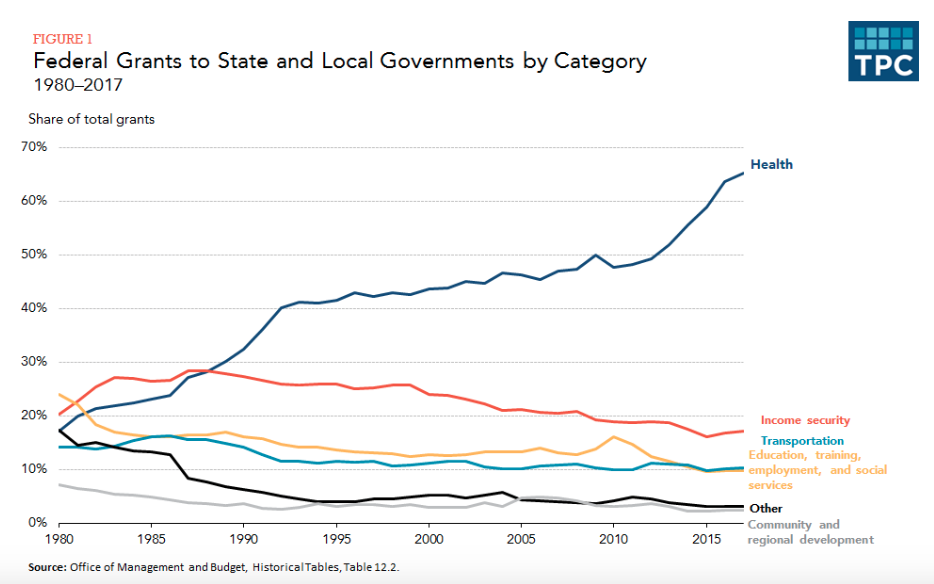 States have dropped the ball, too. Legislatures have spent the last decade gleefully slashing income and business taxes in a misguided contest to attract new investment, all the while rendering the remaining tax burden (mostly on property and sales) more regressive. As a result, states — all but four of whom (Arizona, Indiana, Virginia, and Vermont) have balanced budget requirements that prohibit them from running deficits — are spectacularly ill-equipped to weather a ripple in the business cycle, let alone the tsunami washing over us now.

But for austerity-minded lawmakers, that was always the point. The retreat from public commitments and public goods would be achieved by devolving authority and responsibility — from federal to state and from state to local — to jurisdictions that lack the fiscal capacity to do what is needed. True to form, federal and state transfers to local governments have declined dramatically (especially since the Great Recession). “What Washington does to the states,” Jamie Peck observes, “the states do to cities, and cities do to low-income neighborhoods.” Austerity rolls merrily downhill.

The logic, ultimately, is not just destructive but predatory. Behind McConnell’s suggestion of state bankruptcy is the assumption that states would have to liquidate assets — foremost among them public pension funds. And when the austerity snowball comes to rest at City Hall, the response will be the sort of fiscal desperation — marked by tax abatements for the well-heeled and revenue-hungry policing of the poor — on display in settings like Ferguson, Missouri across the last generation. As in the Great Recession, local and state fiscal anxieties will counteract any federal stimulus, slow the recovery, inspire another round of spending cuts, and deepen existing inequalities.

In short, McConnell has it almost exactly backwards. A just federal system would rest on robust and universal social citizenship secured by the fiscal capacity of the national government. Lawmakers in Washington would have a core obligation to ameliorate market inequalities, whether generated across people or across places. State and local governments could then fulfill their promise as “laboratories of democracy” by building on that floor, rather than scrambling over each other to find the basement.

But, unlike almost every other federal system, the United States has no legal or political commitment to any form of regional redistribution (such as tax harmonization or revenue-sharing) that might address uneven development. In the best of times, this means that the gaps between rich states and poor states grow wider, and the political differences between them harden. In hard times, it means that poor and rich states alike can be thrown to wolves.