With just over fifty days until the United Kingdom is due to leave the European Union, the chairman of the Conservative Party, Brandon Lewis, spent Monday focused on important political issues, as you might expect. Not the fact his party is in utter meltdown, squabbling over new alternatives to the Northern Irish backstop knowing full well anything put forward will be rejected by the Republic of Ireland and all other EU members. Not the mountain of legislation that must be passed through the House of Commons to actually make Brexit legally and logistically functional.

No, Lewis was intensely focused on dick pics.

One dick pic in particular: a Conservative activist had trawled Labour candidate Sally Keeble’s Twitter likes and discovered that, in addition to an array of tame political tweets, she had liked a dick pic. Why, Lewis opined, hadn’t Jeremy Corbyn commented, and why was this woman still a Labour candidate and not immediately sacked for such a crime? With the dick in question firmly lodged in his mind, he devoted two separate tweets to the issue, perplexed that Labour hadn’t bothered to comment. 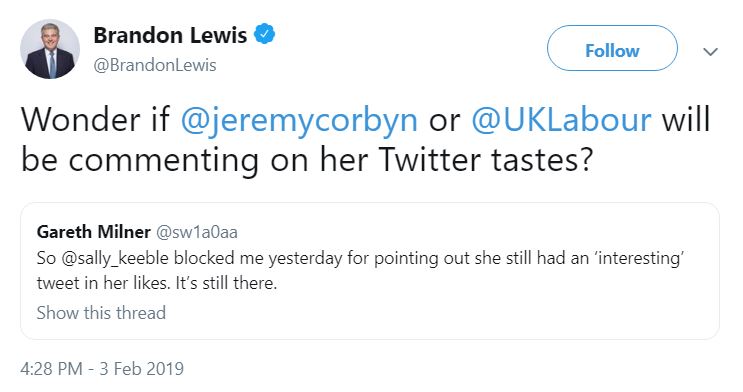 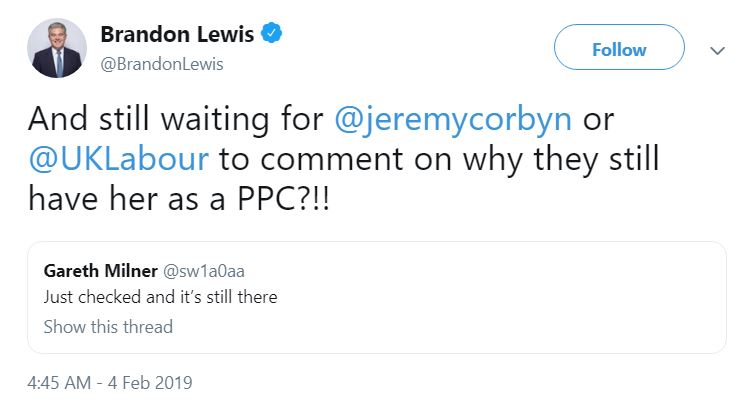 Keeble later said she’d been hacked, finding her Twitter had been accessed from three locations, and reported the breach to the police. Even had the minor show of approval been deliberate, liking a dick pic is hardly an offense to merit being stripped of one’s candidacy. Lewis clearly hadn’t considered the implications of maintaining that an appreciation of male genitalia and holding public office are incompatible: a Parliament consisting exclusively of lesbians and self-loathing straight men would have an exceedingly slim demographic pool to choose from. The outrage Lewis attempted to stoke wasn’t forthcoming; the predominant response from political journalists and the public was, “So what?”

Instead it drew attention to Conservative hypocrisy: in an attempt to muster as many votes as possible for Theresa May’s doomed EU withdrawal agreement, the Tories have reinstated the whip for two MPs currently under investigation by the party. Andrew Griffiths bombarded two female constituents with hundreds of sexual messages, and was suspended after complaints; previously he had been under investigation for bullying and groping colleagues. Meanwhile, Charlie Elphicke remains under police investigation for alleged sexual offenses involving two younger aides.

But the Tories’ online nightmares didn’t end there: MP Nadine Dorries then wrote a tweet that confused journalist and lecturer Ash Sarkar and Labour candidate Faiza Shaheen, two women who look completely different but happen both to be Asian. Both women highlighted the lazy racism inherent in the move. Over the weekend, another MP, Daniel Kawczynski, was deluged with criticism and ridicule for claiming that the postwar United Kingdom received no funding through the Marshall Plan, telling historians who tried to explain that the UK was in fact the largest recipient to “get out more,” and hanging up on a radio host upon being challenged again.

A little over a year ago, Lewis announced that the party planned to hire “an army of Tweeters” to campaign online for the Conservatives, in a state of utter panic at the formidable success of Momentum and Labour in creating popular and viral content to publicize the party’s policies. Study after study shows Labour are winning the online arms race while the Conservatives are stuck in Instagram training sessions where they are encouraged to “act like real people.” One problem remains the Tories’ inability to build a proper youth movement: in late 2015 the youth wing of the party, Conservative Future, was disbanded following allegations of bullying, blackmail, and sexual crimes, preempting an inquiry into the suicide of a young member bullied at length by a senior figure now permanently expelled by the party. Attempts to rebrand as Activate ended in ridicule, thanks to being entirely out of touch, replete with excruciatingly embarrassing memes, then targeted by parody accounts and hacking. Leaked WhatsApp chats of members joking about “gassing chavs” ended any hope of a resurgence.

The Conservatives’ problem is not a lack of youth interest, however: Momentum is often characterized as a youth movement, but membership varies widely in terms of age. What Labour have that the Tories don’t is a coherent message that is shared easily. With Labour, it’s simple: would you like your local community to be fairer, the economy more balanced, and fewer people impoverished to enrich a few at the top of the pile? The Tories, conversely, have an entirely negative message focused on fear-mongering about Jeremy Corbyn, attempting to battle the positivity of Labour’s slogan, “For the Many, Not the Few” with the vague, uninspiring and non-committal “Opportunity.”

No amount of social media training and strategizing can combat the fact that the party have few ideas, none capable of inspiring a grassroots response on social media. And while their MPs remain loose canons — tweeting like embarrassing older relatives, making racist gaffes, doubling down on blatant factual inaccuracies and getting over-excited about dick pics — Labour will continue to run rings around them online.