In his second term, Barack Obama has begun contemplating his legacy and thus his presidential library. At the moment, the leading site contender is the University of Chicago, not only the birthplace of Milton Friedman-inspired economic deregulation, the “fantasies of the Chicago Boys,” but also the Obamas’ Hyde Park neighbor and former employer.

Less well known, however, is that UChicago also serves as a window into the fully corporatized future of education, where an unquestioned goal is profit for top staff and the checks-and-balances of the trustee system do not function.

In this future, outsize compensation is hidden by a PR machine, funded by growing tuition and debt, and allocated despite questionable job performance. Simultaneously, non-profitable but mission-focused endeavors are sidelined and contracts are given to the institution’s claimed guardians.

Over the last decade, profit motive has made significant inroads into the American ivory tower. At universities, money is meant to support a larger social mission, not profit presidents and provosts: ideally, these high-visibility support staff should believe enough in education and research to want any extra resources to go there rather than to themselves. At places like UChicago, however, the ideal of administrative public service has been gradually replaced with that of maximizing short-term self-interest, despite debatable benefits to the institutions and the populations that they claim to serve.

Just as with CEOs, university administrators’ disproportionate pay increases now regularly stand out against news about continuing economic stagnation and budget austerity: the Chicago Tribune’s notice of a $90,000 performance bonus awarded the president of the University of Illinois’s flagship Urbana-Champaign campus, or successive Boston Globe revelations about costly clauses in contracts to a past Brandeis president.

UChicago President Robert Zimmer bests these reports, however. He received four successive years of higher-than-average compensation increases, including an unusual 110%, $1.76 million pay spike that not only brought him from $1.6 to $3.4 million in total compensation, but also the top position in the Chronicle of Higher Education’s annual rankings of highest-paid private university presidents. Newly released IRS figures now also show Zimmer’s post-pay spike compensation is around $1.9 million, double what he made five years ago.

Until now, the peculiarity of Zimmer’s compensation has largely gone unnoticed because his benefits have extended to include personal use of its “News Office” — effectively an in-house PR firm serving top staff but funded with institutional money intended to publicize noteworthy achievements in education and research.

Since the December 2013 Chronicle rankings release, UChicago News Office statements successfully deflected scrutiny. At the time, media outlets like the Huffington Post observed that Harvard’s president made only $899,000 — not even noting that in terms of compensation-per-endowment, Zimmer had leapt from making eight to seventeen times as much as the president of the world’s wealthiest university.

The explicitly final News Office statement nevertheless asserted that Zimmer’s compensation was “consistent with leaders of institutions of similar scale and caliber” thanks in part to “data and guidance from an outside consultant who compares similar roles at twenty peer institutions.” UChicago, however, refused to explain specific figures or release the names of the twenty comparable peer institutions. Furthermore, the officials directing the News Office’s response were not identified despite multiple informational requests to Zimmer, Vice President David Fithian, Chairman of the Board of Trustees Andrew Alper, incoming Provost Eric Isaacs (former director of Argonne National Laboratories), and outgoing Provost Thomas Rosenbaum (the next president of the California Institute of Technology).

Publicly-available data calls into question the accuracy of the UChicago News Office statement, however. Although the collapse of regular and one-time compensation in IRS-reported figures complicates analysis, as the Chronicle has noted, comparison of presidential compensation at the other top twenty private universities by endowment shows that Zimmer’s recent 110%, $1.76 million pay spike is an extreme outlier. In both percentage and absolute terms, Zimmer’s pay spike is around double all other outliers, which consist of 43–49% and roughly $1 million fluctuations.

Additionally, the $42,000 median compensation increase indicates that Zimmer’s $115,000-$320,000 annual pay raises in the prior three years were three to seven-and-a-half times higher than normal. 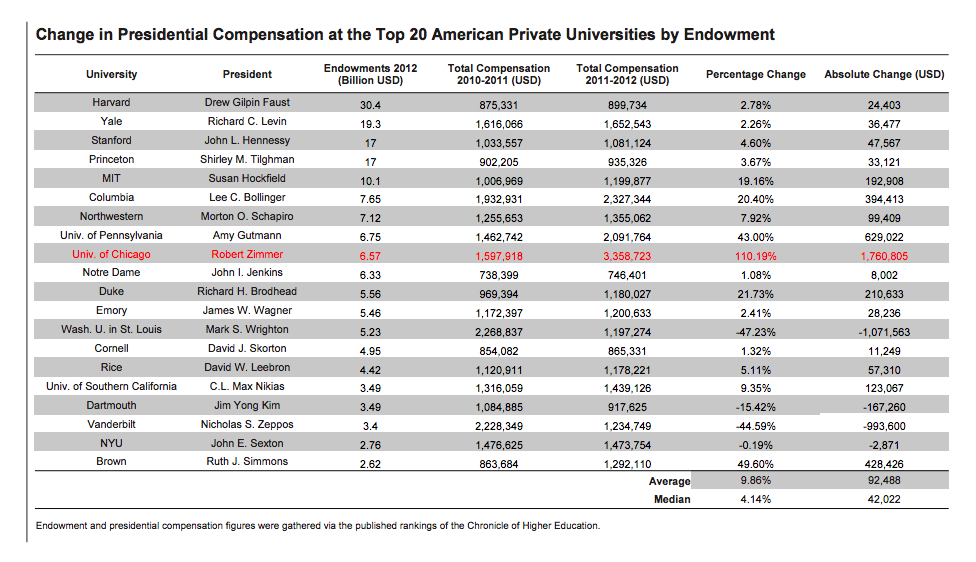 Beyond the President’s office, other administrators have also begun diverting disproportionate amounts of money. Since taking office in 2007, outgoing Provost Rosenbaum has seen his compensation increase 50% — and as he leaves to head up Caltech, he is thus due to take with him $1 million from pay raises. This is even apart from any UChicago-particular increase in administrative positions, which have doubled over the last twenty-five years across US universities and are costing what a senior researcher at the American Institutes for Research terms “just a mind-boggling amount of money per student.”

These levels of administrative compensation have now begun to constitute major annual expenditures on par with allocations more clearly fulfilling UChicago’s mission. For example, Zimmer’s annual compensation could replace unstable government grants for three to four labs a year instead of having them close ($500,000-$750,000 a year per lab), or go a long way towards construction of an international academic center ($3.45 million) or permanent endowment of a humanities or social science professorship (a $3.5 million gift).

These levels of administrative compensation also come at great cost to students as universities shift to a “fee-for-service” mentality found in businesses. For example, current UChicago undergraduate tuition of $46,386 can pose a significant barrier to some students. Many universities adhere to the “high sticker price, high discount” model, in which tuition from the well-off becomes financial aid and helps the less wealthy. Despite much-publicized financial aid initiatives, however, Chairman Alper was confronted at a public appearance by many student questions about “the rise in tuition prices and lack of financial aid” — and he answered by explaining how high demand for a UChicago education allows for high tuition and how high tuition in turn supports new programs. Students have also started to raise detailed questions about on-campus housing priced significantly higher than that in the surrounding community.

Conversely, UChicago has shied away from needed and feasible but money-losing educational initiatives. Situated in an upscale neighborhood surrounded by urban poverty and epidemic gun violence, its Medical Center closed a money-losing trauma center in 1988 and has since been beset by protests, including one observed by undercover campus police. Official statements, hospital representatives, and Chairman Alper claim that high costs and a lack of resources makes a trauma center unfeasible, but compensation of a single person like Zimmer now approaches the reported inflation-adjusted $3 million annual operating deficit that ended a community resource benefiting both medical students and trauma patients. Apart from any other lines in UChicago’s budget, recalibration of multiple administrators’ pay would likely provide more than enough money for a trauma center, a more clearly mission-focused expenditure.

Concurrently, UChicago has become an “outlier” and “put its credit rating at risk” by taking on debt equal to more than half of its endowment, according to Bloomberg News. A leaked financial plan from June 2013 had already indicated that UChicago was on the path to owe three times as much debt as peers like Northwestern. Accordingly, Crain’s Chicago Business predicted in August that due to high debt levels “ratings agencies could downgrade the university’s credit by as many as two notches.” Since then, Moody’s and Standard & Poor’s have shifted the outlook of its bond rating to negative on three separate occasions in anticipation of a likely credit downgrade. Fundraising operations cannot bring in enough money to keep the credit rating unquestioned, yet compensation of a single person like Zimmer makes up as much as half of projected major annual operating deficits. Nevertheless, UChicago’s financial adviser has vouched that “[t]he money is going to… programmatic strengths.”

A culture of elites rewarding elites seems to lie behind high compensation, especially since UChicago does not seem to possess a reward structure with “rigorous performance standards,” as observed by Crain’s Chicago Business.

Regarding job performance, Chairman Alper has claimed that “Bob Zimmer’s compensation reflects the high degree of confidence the board has in his leadership.” Yet, apart from Zimmer’s discouragement of transparency and accountability, a group of 108 faculty have questioned UChicago’s commitment to academic freedom because the Chinese government funds and ideologically screens language instructors. Recent negative publicity also led to the unexplained teaching reassignment of current economics PhD student and infamous Goldman Sachs trader Fabrice Tourre — a move questioned by students since “courageous” commitment to “freedom of inquiry” necessitates the inclusion of “individuals and ideas that are disliked and heavily criticized.”

Similarly, documents suggest that Zimmer or someone close to him began an Administration Building elevator policy where uniformed employees were told to use the stairs when Zimmer was in the building, including a man who had received two hip replacement surgeries. These alleged violations of the Americans with Disabilities and Civil Rights Acts were not taken seriously: the ultimate source of the orders was never identified, despite multiple inquiries to Zimmer, Alper, Provosts Rosenbaum and Isaacs, and Vice President Fithian.

Rosenbaum’s job performance has been uneven as well despite high compensation. For example, he first celebrated the allocation of $12.5 million for two childcare centers for parents who can afford $1100-$1600 a month for fulltime care as a benefit to “the entire community”, then oversaw a response touting more widely available parental resources, including a locked, asbestos-containing equipment room advertised as a lactation site.

Importation of a profit-driven mentality seems directly responsible for these compensation practices. Besides scattered individuals like David Brooks, MBAs dominate the university’s Board of Trustees, which elected as their chairman Alper, a twenty-one year veteran of Goldman Sachs.

Additionally, during the same time period that the Board allocated apparently excessive compensation to administrators like Zimmer and Rosenbaum, at least two trustee-associated companies profited from administrative actions, despite the standard opinion that “colleges should simply not do business with the companies of their board members, in order to avoid. . . appearances of self-dealing and personal enrichment.”

Most recently, UChicago supported the use of Chicago taxpayer money to build a hotel in the trustee-associated Hyatt chain via controversial funds taken away from public schools and city parks.

Overall, then, despite its official classification as a nonprofit educational institution, perhaps the University of Chicago’s best parallel lies on the outskirts of the business world, the under-regulated financial sector rooted in what President Obama describes as “huge bets — and huge bonuses — made with other people’s money on the line.” As in finance, top personnel are guaranteed outsize compensation no matter how the institution fares. As in finance, top personnel are insulated from failure, but the consequences of their decisions fall on other stakeholders — UChicago’s students, faculty, and staff, of course, but
“also the local, national, and global publics who should benefit from its research and resources.

Unfortunately, a lack of checks-and-balances hinders reform of institutions that have strayed from their educational missions. Since the UChicago Board of Trustees appoints the UChicago Board of Trustees, the majority determining its present course will determine its future. Other appointment systems do exist; for example, degree-holding alumni elect one of Harvard’s two governing boards.

At universities like UChicago, however, the trustees in question would have to choose to rewrite the bylaws and voluntarily cede power and whatever personal benefits they may be receiving under the current system of governance. Under such conditions, change is very difficult.

Ultimately, higher education’s future can be clearly glimpsed through the University of Chicago: power and money are congealing at the top, so that the few increasingly benefit, to the detriment of most.