Of the various right-wing arguments deployed against the social programs of America’s New Deal and Great Society eras, among the most common was that such programs simply didn’t work. Poverty, according to this line of thinking, is not a straightforward by-product of market forces but something whose causes are more diaphanous and that cannot be addressed by way of simple redistribution. At the level of rhetoric, this argument could be very effective: by mystifying poverty or by attributing it to cultural factors, conservatives successfully embedded a prejudice against social spending in the mainstream of both major parties — a development that ultimately led to catastrophic efforts like the Clinton administration’s welfare reform bill.

The idea is nonsense, and always has been. But the pandemic, which elicited heightened levels of public spending on a range of income support and social security programs during both the Trump and Biden administrations, has helped to debunk it on a truly grand scale. Evidence throughout 2021, for example, clearly showed the Child Tax Credit — which sent payments worth $250/month for children ages six through seventeen and $300/month for children younger than six — quite literally kept millions of children out of poverty (millions of them subsequently reentered it when the credit was phased out).

In this respect, a new analysis recently published by Asha Banerjee and Ben Zipperer of the Economic Policy Institute (EPI) is just the latest addition to a vast body of data demonstrating that poverty is, straightforwardly, a policy choice. Drawing on the latest census data, Banerjee and Zipperer analyze the implications of various income support and pandemic-era programs in  2021 — finding that they protected tens of millions from falling into poverty, contributing to a rate that was lower than before the pandemic.

Not every program in EPI’s report dates from the pandemic. By far the largest impact (unsurprisingly) came from Social Security, which kept an estimated 26.3 million people from poverty in 2021. 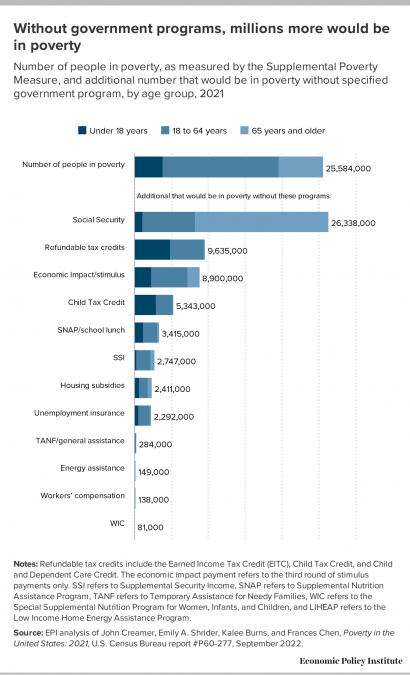 For decades, Democratic and Republican politicians alike have hacked away at the universality of various social programs — often, once again, on the absurd grounds that means-testing is more effective. It’s notable, then, that Banerjee and Zipperer find pandemic-era unemployment insurance (UI) benefits kept some 2.3 million out of poverty, one reason being that they did away with many of the restrictive eligibility requirements (the authors, in fact, note that estimates drawing on the existing census data likely understate the extent of UI’s anti-poverty impact, which was quite probably millions more). They conclude:

Given the overwhelming effectiveness of these programs in keeping people out of poverty, it is unconscionable that policymakers have allowed them to expire and added to the stress of low-income families in the years to come.

Banerjee and Zipperer are absolutely right. However, the pandemic — and the various discourse which ensued around particular benefits and credits — also underscored the extent to which the “debate” around the effectiveness (or supposed noneffectiveness) of social expenditure is an illusion.

If people have a modicum of economic security and are not compelled by desperation to seek out low-wage employment, after all, then the pool of cheap labor for business is going to be much smaller — a fact the business lobby and its tribunes in Congress rather shamelessly made explicit at various points throughout the pandemic, especially in relation to unemployment checks. Perhaps the real problem with social security programs and anti-poverty initiatives, in other words, isn’t that they don’t work but rather that they actually work a bit too well.