According to newly released data, an astonishing number of children have entered poverty in a very short period of time. The research, published by the Center on Poverty and Social Policy at Columbia University, finds that America’s monthly rate of child poverty spiked from 12.1 percent in December 2021 to 17 percent in January 2022 — the highest rate measured since the end of 2020. All told, the jump means that some 3.7 million more children have become poor all at once, with black and Latino children experiencing the most significant increase. 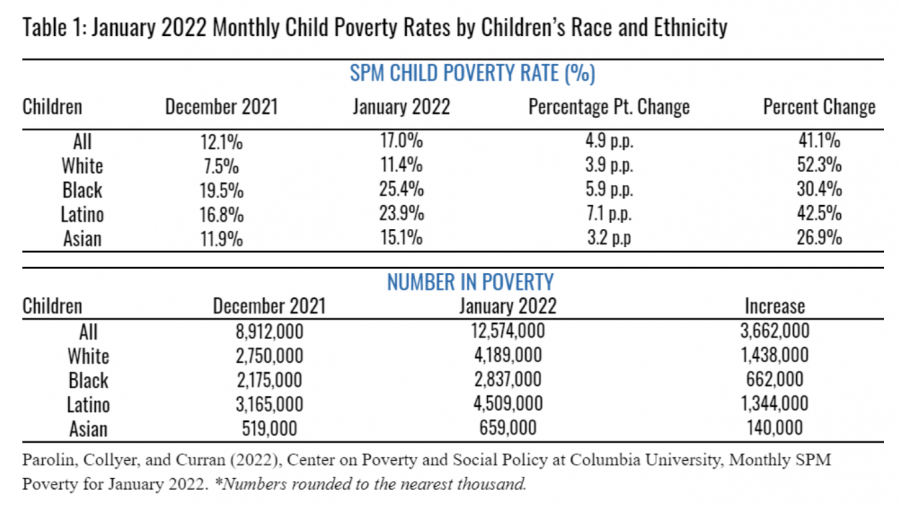 Though decades of political rhetoric and social policy hokum from various think tanks has tried to muddy the waters around poverty, the cause here is both direct and undeniable. Between last July and last December, the Internal Revenue Service (IRS) sent out billions in economic relief to families under the Child Tax Credit program passed by Congress in March. The program, which sent payments worth $250 a month for children ages six through seventeen and $300 a month for children younger than six, represented an experiment in direct government cash transfer on a grand scale. (The size of the benefits was reduced and ultimately phased-out for higher income families.) It expired at the end of December, and Democrats proved unable to negotiate its extension — in large part due to the spurious demands of West Virginia senator Joe Manchin, who insisted any renewal come with a Dickensian work requirement and an income cap.

While short-lived, the program’s outcomes were swift and immediately measurable. According to various monthly briefs published by the Center on Poverty and Social Policy, the Child Tax Credit kept millions of children out of poverty every month that it remained on the books: 3 million in July; 3.5 million in August; 3.4 million in September; 3.6 million in October; 3.8 million in November; and 3.7 million in December. As its researchers point out, the increased capacity for families to meet their basic needs also reduced hunger and had no visible impact on parental employment either.

All told, the initial passage and subsequent expiration of the Child Tax Credit is a case study in the ease and speed with which poverty can be cut through government programs. Throughout the 1980s and 1990s, a bipartisan continuum of conservative and liberal policymakers variously insinuated that New Deal– and Great Society–era programs were actually responsible for keeping people in poverty. Their proposed solution — to dismantle much of what was already a very fragile and incomplete American welfare state — was accompanied by a series of demeaning (and often overtly racist) cultural explanations for poverty and a range of market-based remedies to go with them.

As the recent jump in child poverty makes clear, this way of thinking is both wrong on its face and a blueprint for moral catastrophe. No one should be poor, and no one ultimately needs to be. Poverty is a political choice rather than a personal failing. And, if you want to reduce it, the solution is to give people money. It’s as simple as that.