Earlier this week, Representatives Barbara Lee (D-CA) and Mark Pocan (D-WI) — co-chairs of the Defense Spending Reduction Caucus — introduced legislation to significantly draw down US military spending. The People Over Pentagon Act would cut the Department of Defense budget by $100 billion and reinvest the money in nonmilitary federal programs.

The proposed reduction, which would lower the military budget to a still-whopping $682 billion, will be slandered by the political establishment as haphazard and extreme. It is neither.

First, the bill is considered in its cuts, taking guidance from a Congressional Budget Office report from October 2021 that presents several options for shrinking military spending by $1 trillion over a decade (the report was prepared at the request of the Senate Budget Committee chairman, Bernie Sanders). Second, a $100 billion decrease is considerably more modest than other sensible proposals for zapping Pentagon largesse — Rep. Lee herself released a framework in 2020 for slashing the military budget by $350 billion.

All told, the cuts in Lee and Pocan’s legislation would result in a level of military spending only slightly less than the total before the Trump-Biden military buildup from Fiscal Year (FY) 2018 on. 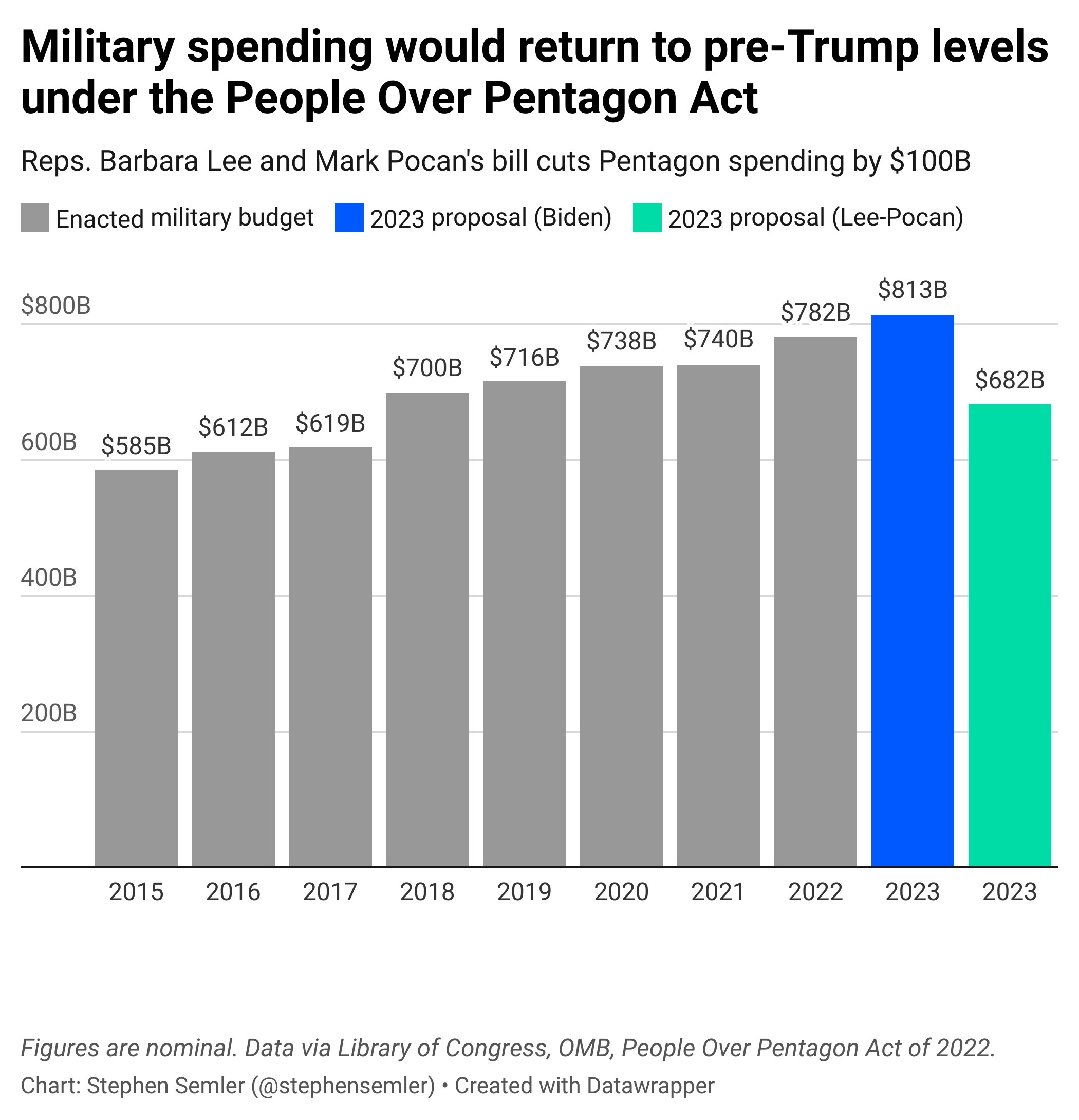 Simply shrinking the military budget isn’t the main thing Reps. Lee and Pocan are after, however. The pair’s chief motivation is to reinvest the canceled military funds in programs that will boost ordinary people’s security and livelihoods. The bill text notes that because “many of the most urgent threats . . . are not military in nature,” Pentagon spending ought to be reduced “and the associated savings should be reallocated” to better respond to those nonmilitary threats.

In other words, the legislation’s intent is to make US spending priorities more favorable to the needs of the working class by using excess Pentagon capital to buttress social programs. As Lee and Pocan argued in the press release announcing the bill, showering the military with more and more money, year after year, not only fails to improve security — it actually produces insecurity by crowding out funding for addressing crises like climate change and pandemics.

The bill doesn’t dictate what programs would receive the $100 billion in savings. The money could go to, say, healthcare or education or a green jobs bill. (Under House rules, a separate bill or amendment is needed to set out those allocations.) But what’s certain is that the Lee-Pocan measure is an indictment of the anti-worker policies that habitually come out of Washington. More specifically, it’s an indictment of Biden’s military budgets and spending priorities.

For next year’s Pentagon allocation, Biden has proposed the fifth-largest military budget since World War II. This week, the Senate Armed Services Committee endorsed adding another $45 billion to Biden’s request. There is little reason to think Biden will oppose the Senate committee’s move. After all, the president had no qualms about approving the FY 2022 military budget after Congress allocated about $30 billion more than his initial request.

At the same time, Biden’s budget request for FY 2023 is a direct appeal to the same conservative Democrats who derailed his domestic agenda last year. Unlike his FY 2022 proposal, Biden’s FY 2023 plan doesn’t appeal to Congress to pass progressive legislation on labor, social spending, or the climate. It doesn’t put forth a second infrastructure bill, for example, despite the first ending up as a hollowed-out version of his original plan, containing just a quarter of its initial climate funding. It’s noncommittal about renewing the push to pass the Build Back Better (BBB) bill, the ostensible centerpiece of his domestic program. Several BBB provisions are mentioned in Biden’s FY2023 request, but they’re lumped together in a nonspecific placeholder called a “deficit neutral reserve fund.” Other BBB provisions are left out of the request entirely.

The People Over Pentagon Act offers a major course correction to escalating militarism and an atrophying welfare state. While its legislative prospects are uncertain, the bill is exciting (and legible) enough to offer value as a mobilizing tool. And because it affects all parts of the federal budget, the act has something for working-class people across the country. It would be a first step in funding human needs rather than padding the bottom lines of weapons contractors.