By the time the Senate passed Joe Biden’s infrastructure plan in August, Biden had negotiated away three-quarters of its original value to appease Republicans. This is especially worrying amid reports that Biden is now considering cutting down the larger, $3.5 trillion social spending bill to placate holdouts among conservative Democrats.

In stark contrast to the reconciliation and infrastructure bills, Congress authorized more funds to the Pentagon’s fiscal year 2022 budget than Biden originally asked for. Biden initially requested nearly $12 billion more than Trump’s last military budget for fiscal year 2022. The House and Senate armed services committees added almost $25 billion on top of that, bringing the top-line figure to $778 billion. While the Senate version has yet to come to a vote, the House passed a bill last month authorizing that amount by a 316-113 margin.

Roll call votes on military spending reveal that there are considerably fewer “deficit hawks” or “fiscal conservatives” in Congress than reported by mainstream media outlets, if any at all.

Last month, all House Republicans voted against an amendment offered by Representative Alexandria Ocasio-Cortez to reduce next year’s Pentagon budget by 10 percent. Similarly, even if Republicans had opposed instead of championed the 2017 tax cuts — projected to cost $6.7 trillion over the next decade — the GOP still voted for military spending increases under Trump 93 percent of the time.

And it’s not just Republicans — conservative Democrats are also hypocritical in their selective concern about the national debt.

For example, Representative Josh Gottheimer has decried the reconciliation bill’s cost — $3.5 trillion over ten years — and has gone so far as leading an effort in the House to vote on it and the infrastructure bill separately, all but ensuring the former never passes. But just two weeks ago, Gottheimer voted for the military policy bill that authorizes well over twice as much money per year as the reconciliation package. 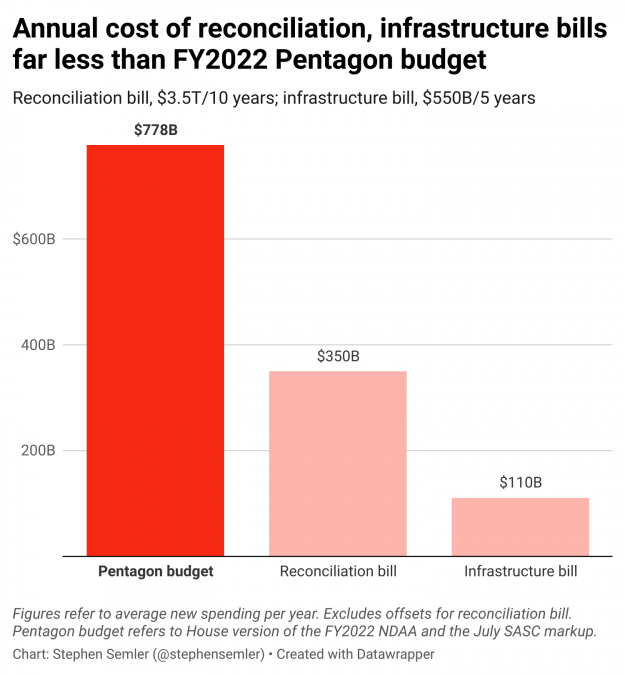 In fact, Gottheimer voted for every Pentagon budget since he entered Congress. So, while he says it’s too expensive to obligate $3.5 trillion in social spending over ten years, Gottheimer has supported $3.91 trillion in military spending in only five years.

Gottheimer’s mix of obstructionism and hypocrisy isn’t unique to conservative Democrats in the House. In the Senate, both Kyrsten Sinema and Joe Manchin are ostensibly blocking the reconciliation bill over its cost. Yet Sinema and Manchin have voted yes on Pentagon budgets 100 percent of the time since entering office. The total cost of Sinema’s eight consecutive yes votes on military budgets is $5.96 trillion. For his part, Manchin approved $7.54 trillion for the Pentagon by voting for the last ten military budgets.

Calling out this hypocrisy is helpful in continuing to build and sustain public pressure on conservative Democrat holdouts to the reconciliation bill. Thankfully, Senator Bernie Sanders already has. So have Representatives Cori Bush, Pramila Jayapal, and Ocasio-Cortez.

Highlighting the hypocrisy of conservatives (in both parties) when it comes to government spending should become a staple of congressional progressive discourse.

There is nothing new about Washington shooting down social spending plans with austerity politics while always having enough money to sacrifice on force projection. Moreover, we will be in the same situation this time next year, as there are many progressive policies on tap that must be accompanied by an enormous amount of public pressure on Congress in order to have a shot at passing.

Ensuring the public knows that every member of Congress is fine with spending money — and objecting to a social program’s cost is typically a selective, conditional, and hypocritical practice — will be helpful in getting those much-needed policies passed. 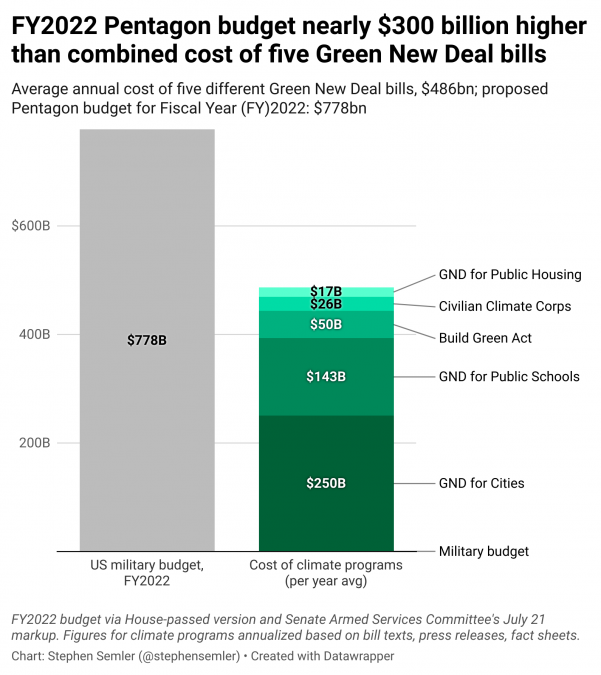