In recent days, numerous governments have announced financial as well as military support for Ukraine, as it faces a devastating Russian invasion and an exodus of refugees already counting well over 1.5 million.

Such reliance on outside help is not new. Since the 1990s Ukraine’s economy has lagged badly behind other former Eastern bloc countries, and — under the effects of global crisis, the pandemic and the war ongoing since 2014 — it has repeatedly turned to loans from the International Monetary Fund (IMF) and European Commission. Yet this lending was far from just altruism. Servicing the debt became an ever bigger share of public spending, and the loans also came on condition of specific policies designed to foster a “better business environment” and cut back the residual welfare state.

As Elliot Dolan-Evans notes at OpenDemocracy, even the European Commission’s announcement of €1.2 billion support for Ukraine on February 21, just before the invasion, referred to unspecified “structural policy measures” in exchange for loans. Now, Ukrainian activists are calling for the cancellation of Ukraine’s foreign debts. Not having to service these debts won’t alone be enough to save Ukraine. But it is important in ensuring that, when they have reconquered their independence, Ukrainians won’t be even more dependent on creditors or domestic oligarchs over whom they have no control.

Alexander Kravchuk is an economist and editor at Commons: Journal of Social Critique, who has previously written about IMF conditions on loans to Ukraine. Jacobin’s David Broder asked him about the country’s economic situation and why debt cancellation is important if Ukrainians are to be able to shape their future.

Some Western media talk about Ukrainians being “middle-class people just like us,” sometimes counterposed to victims of war in other parts of the world. Can you give us a sense of what living standards were like for ordinary people even before last month?

What they say is not true. Ukraine was the northern part of the Global South and the poorest country in Europe, fighting for this place with Moldova.

Below I provide some comparative data on our economic development:

Thus, in terms of national income per capita, Ukraine lags far behind the European Union, and even more so the United States. The latest data indicates the poverty of our people, with average wages below five hundred euros per month: 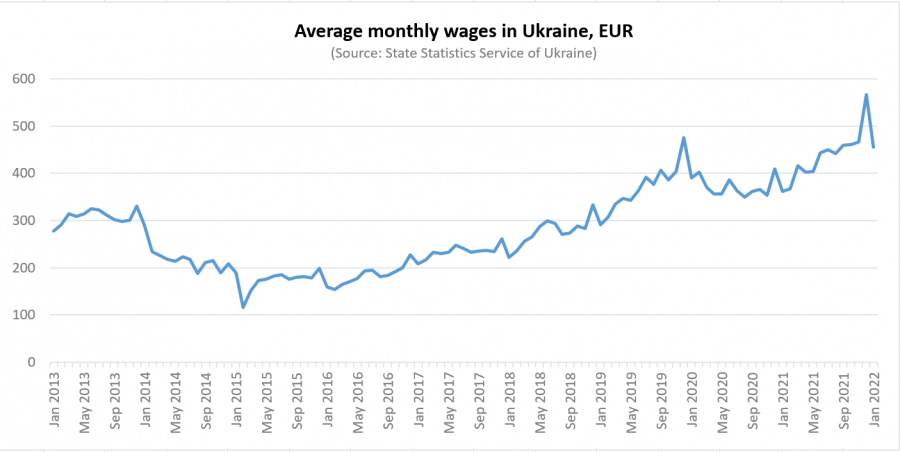 After the beginning of the war in the East, the economic crisis of 2014, and the loss of markets, people’s incomes have barely recovered in recent years. But even that level was still too low. The reasons for this were:

— The wrong debt policy. Loans from the IMF were issued on terms which demanded that even the remnants of the welfare state be cut back. Payments simply to service the public debt have become one of the largest parts of the state’s budget expenditure (amounting to 8.5 percent of the total in 2021).

— Lack of support for the Ukrainian high-tech products, in particular due to the unfair trade agreements with foreign partners (including the Association Agreement with the EU).

The war that began in 2014 blocked the flow of investment, and only worsened the situation. Since then, we have also been restricted in terms of political participation. Socioeconomic protests were marginalized and were “out of place” during the war.

As a result, instead of fighting for a better future in Ukraine, Ukrainians went abroad en masse. Thus, according to the UN, in 2020 Ukraine ranked eighth in the world in terms of labor migration. Millions of Ukrainians have already left in recent years to eastern EU member states (e.g. Poland, Czech Republic). There, they replaced the labor force that left these countries looking for a better life in Germany, Great Britain, and other core countries. With this war, the EU is predicting as many as five million more people will arrive from Ukraine — a higher qualified labor force to integrate into European society.

Over the last eight years, the IMF and World Bank did lend larger amounts to Ukraine. Were there “strings attached”? If Volodymyr Zelensky again seeks foreign loans, what resonance does the demand for debt relief have in Ukrainian society?

The IMF and other financial institutions were drivers of so-called “market reforms” in Ukraine. We wrote about this in our project Alternative Mechanisms for the Socio-Economic Development of Ukraine. In 2015, I wrote an article for that pamphlet, regarding the origin of debt dependence and its negative impact on Ukraine.

The last “victory” in this field was the changes in the energy market. In Ukraine, gas prices have increased ten times under IMF pressure since 2014. In November 2021, the Ukrainian government agreed with the IMF on the final deregulation and selling of gas produced in Ukraine, at high exchange prices. It could increase tariffs three or five times over during the war.

Here you may see a quick English translation of my latest infographic: 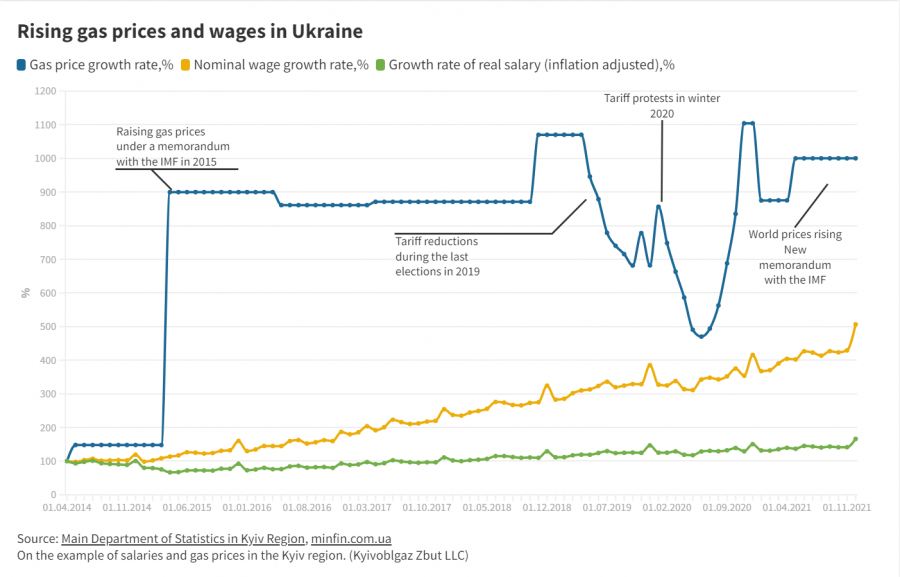 We managed to promote the idea of ​​revising debt policy in wider Ukrainian society. The proposal was picked up by different actors, including by nationalist forces. Nevertheless, the outside pressure was too strong, and Zelensky’s new government was too weak to dare to break through it. After all, in this case it required a strong economic policy and the restoration of full-fledged sovereignty.

In your petition you write that: “Chaotic borrowing and antisocial debt conditionality was a result of total oligarchisation: unwilling to fight the wealthy, the state rulers kept getting deeper in debt.” Can you explain this — and does the high debt force the state to rely on oligarchic-private interests for infrastructure projects?

This link between the weight of debt and reliance on private interests is rather indirect but still important. The argument that Ukraine has an excessive, bloated state has developed for a long time now. However, the share of national income that is distributed through taxation and budgeting in Ukraine is much less than in developed European countries.

Therefore, in conditions when most state-owned enterprises are privatized, Ukraine does not have the resources and capacities to develop infrastructure projects. Private capital in Ukraine focuses either on the commodity industries or the financial sector. This trend will be even more noticeable after the war, as private capital will be scared by instability in the region.

Many Western countries are already promising and delivering humanitarian aid to Ukraine. What is the specific importance of debt cancellation, firstly in fighting the war, and in allowing Ukrainians to shape their own future?

Sooner or later the war will end, and Ukraine will be left not only with bombed infrastructure but also with a large public debt.

The option of debt restructuring that took place last time is not suitable for the Ukrainian economy and is rather more attractive to creditors themselves. In 2015, some of the payments to commercial lenders were postponed for three years and 20 percent of the principal was written off. But what was the price for that? Ukraine was obliged to pay creditors 15 percent of its GDP increase over 3 percent, and 40 percent of each percent of its GDP increase over 4 percent. We could barely service our debt even before the war. The terms of the loan should be reviewed on a transparent basis.

What kind of mechanisms do you imagine would allow this demand to be fulfilled? What do you think of the precedent of West German debt cancellation in 1953?

I can’t immediately suggest a debt review mechanism — in particular, because I am writing this under the sound of shelling.

But I am convinced that we can use, for example, the work of the Committee for the Abolition of Illegitimate Debt, as happened in Ecuador in 2008, when 70 percent of sovereign debt was declared illegal and the freed-up funds were used for economic development and welfare.

Today, it’s difficult to think about what a peaceful life might be like for Ukraine. But we need to work on building an independent and socially just society. For this reason, the debt yoke should go in the dustbin of history — together with the army of Russian invaders.