On this day in 2011, after over two and a half weeks of mass nationwide anti-regime protests, Egyptian dictator Hosni Mubarak resigned from his nearly three-decade-long rule.

This past spring, in an interview with Jacobin, an Egyptian photojournalist named Hamada Elrasam referred to the strongman’s resignation as “the so-called step down.” At the time, Mubarak had recently been acquitted of conspiring to kill 239 protesters during the 18 days of the 2011 revolution. His acquittal symbolized the grim continuum between his military-backed government and that of his political heir, the army general Abdel Fattah el-Sisi, who’s been called “the most repressive dictator in modern Egyptian history.”

Sisi’s Egypt is a torture epidemic against political detainees at the hands of police and National Security officers. It’s “Generation Jail,” with tens of thousands of dissidents enduring his prisons  including activist blogger Alaa Abd El Fattah, who’s serving a five-year sentence for violating the country’s draconian anti-protest law. It’s “one of the world’s biggest prisons for journalists,” with some newsgatherers like Shawkan — “I’m a photojournalist, not a terrorist!” — spending years in pretrial detention. It’s state censorship by means of blocking hundreds of websites, the vast majority of them news and media platforms such as independent muckrakers Mada Masr. It’s “rainbow raids,” or the largest crackdown on the Egyptian LGBTQ community in roughly two decades. It’s forced disappearances and extrajudicial killings in the name of Egypt’s US-backed war on terror. It’s political oppression so total that Sisi, who in 2013 presided over the bloodiest political massacre in modern Egyptian history, won the country’s presidential election the following year with an impossible 97 percent of the vote. Now, he stands for reelection as virtually the sole candidate in next month’s race: his competitors have dropped out one-by-one citing violence and corruption, and his last main challenger, the former armed forces chief of staff Sami Anan, was arrested by military prosecution and sent to a military prison only days after announcing his candidacy.

Late last month, a coalition of eight opposition parties and some one hundred and fifty pro-democracy public figures called on voters to boycott the ballot boxes, referring to the race as an “absurdity bordering on madness.” In response, Sisi forewarned, “What happened seven or eight years ago, will not happen again in Egypt [. . .] No, it looks like you don’t know me well.” That is, in the face of discontent — e.g., of prospective boycotters attempting to “overthrow the regime” — this strongman will not back off, and certainly not step down.

“The revolution was an explosion of self-expression,” reflects Egyptian photojournalist Mostafa Bassim. But over the past seven years, he adds, “We have learned hard lessons about the realities of civic activism.” One of those lessons has been the necessity of introversion, as Sisi gained power and the self-expression realized during the revolution acquired deadly risks. In other words, there is an uncompromising, inescapable demarcation — manned by Sisi’s security forces and secret police — between the outward and inward activities of the mind. “The removal of the regime?” Bassim muses, echoing the demands of Tahrir in 2011, “In fact, the regime has removed us.”

With Sisi and his fellow counterrevolutionaries commanding the corridors of power, an explosion of self-censorship or self-policing in spheres public and private, online and in the streets, has come to pass. Bassim, the photojournalist, has in turn staged a discreet and fragmented visual protest. Over the last two years, as part of his portrait series Revolution of the Mind, he documented the traumatic accounts of several Egyptian youth who have faced, in particular, civilian-led smear campaigns due to their criticism of the dominant political and cultural order in the post-revolution era. For these youth, including Bassim himself, their fellow citizens are reinforcing Sisi’s authoritarian model of all-out mind and body control.

“Imagine your family home, neighborhood, and workplace as microcosms of the state security apparatus,” Bassim describes this everyday adaptation of the counterrevolution playbook. “The people who fill those spaces — your family members, your neighbors, your colleagues — start to feel like state informants, and maybe some of them are.”

The following testimonies, edited for length and clarity, were born in the 2011 revolution and unfold in the clutches of the increasingly brutal counterrevolution. In gathering them for Revolution of the Mind, Bassim brings some of the ground-level and soul-deep effects of dictatorship — the inspired yet painful legacy of 2011 — to the fore. 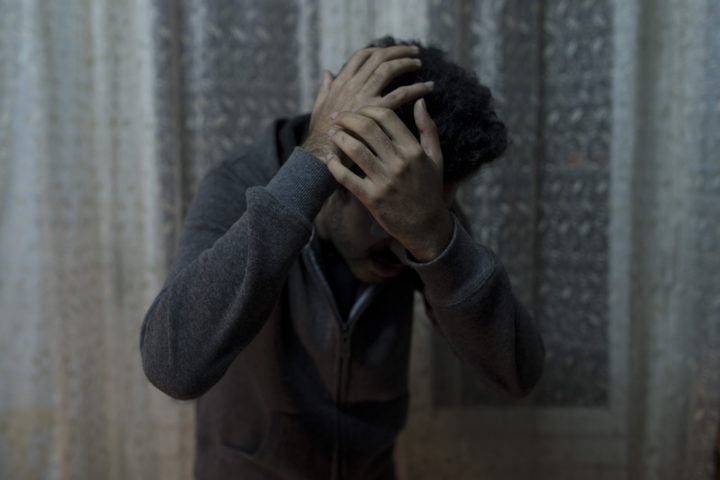 After the revolution, I started writing my opinions on social media and speaking about them in cafés. Some of these opinions were critical of Islam and its influence in politics.

One day, I received a call from an unknown number. “If you don’t stop writing about [the aforesaid topics] and going to the café, I’ll hit you.” I received the same call four more times. Later, a man tried to assault me at the café. “You’re an infidel,” he shouted, “and if you don’t stop, I will punish you.” Back at home, the phone rang. “Stop what you’re writing and saying or you’ll never see the sun again.” Following that, I was afraid to leave my house.

One night, when I was walking home from the café, I heard someone screaming: “You son of a bitch, I’m going to kill you!” I walked faster and then bricks were thrown at me. I covered my face with my arms and ran until I reached the main street to hail a taxi. Following that, I was afraid to leave my house. I didn’t go to the police because I knew that they wouldn’t protect me — actually, if I went to the station and told them my story, they might arrest me for “contempt of religion” or something. So, I stopped writing, speaking and thinking about critical topics for a while.

I moved to Cairo — forced to start a new life. [There, A.H. was detained during a random police search and spent six months in jail without trial.]

Since my arrest in Cairo, I’ve been suffering from extreme paranoia. I feel like all of the people around me — the shop owners, the taxi drivers, the men, the women, even the children — are informants. I thought about going to see a psychologist for my paranoia. I’m afraid of the doctors, though. After I tell them my story, what if they attack me or report me due to my different opinions? 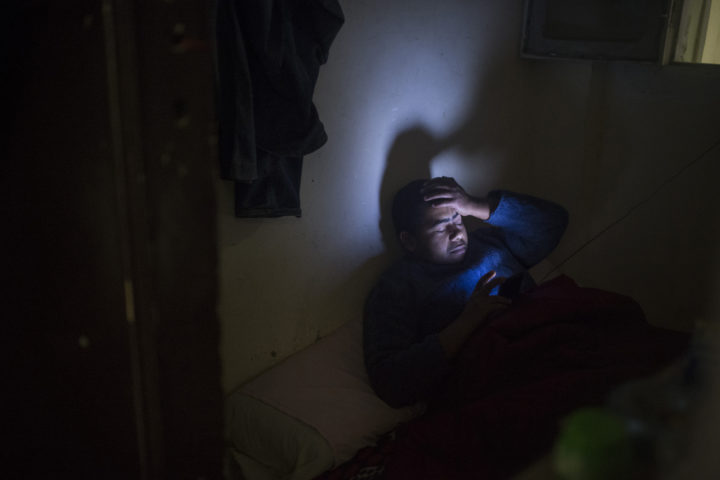 My family is not necessarily a religious one, just very conservative. They believe that I should abide by dominant cultural norms. I used to hang out in downtown Cairo during the days of the revolution, discussing social and political change with my peers. In the years that followed, I started to realize that the people in my life had problems with my new ideas and beliefs, and that they didn’t want to know me anymore.

One of my neighbors accused me of being an infidel due to my critical views about religion. He started a verbal confrontation with my father at a local café and then a physical one with me in the stairwell of our apartment building. My brother said that others from the neighborhood had been insulting him, too, and that he was ashamed of me. In Egypt, religion is like a bomb waiting to explode in your face . . . My parents gave me an ultimatum: adapt to our belief system, or leave the house. I was worried about my family’s safety as well as my own, and I knew that their ultimatum was motivated by fear — that the threats were stronger than them — so I  moved.

Whenever I go visit my family, they insult me and say that I shouldn’t come around. They’re afraid, and so am I. People usually install security cameras to help keep them safe. But [in Egypt], the people themselves are like security cameras: they watch your every move, ready to report you to the police, and they force you to do only what they think is right. 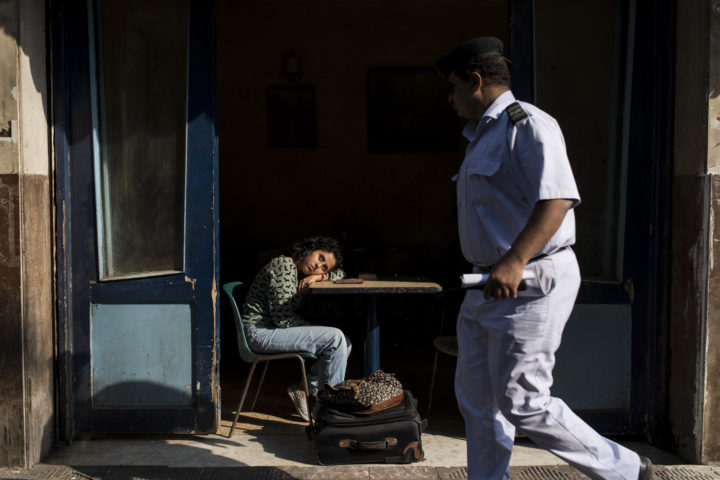 My father is a violent man. He uses beatings and insults to deal with the whole household. All my life I did nothing but obey his orders.

In 2011, when I saw people moving in the streets asking for their rights, I started feeling like what’s happening with the revolution is the same as what’s happening with me: my family is the regime, and I’m the angry young Egyptians calling for their rights, so I started feeling like I should initiate my own personal revolution.

When my family found out that I had been removing my hijab, and that I had befriended people with different ideas, they locked me inside the house, beating and insulting me daily. All my life I said yes to them, but I couldn’t anymore. It’s bigger than the hijab — it’s about my character in general, my opinions, my way of life, my way of thinking.

My family doesn’t care about what I think, only about what society thinks of me. They don’t want people to talk about their daughter who ran away from home. 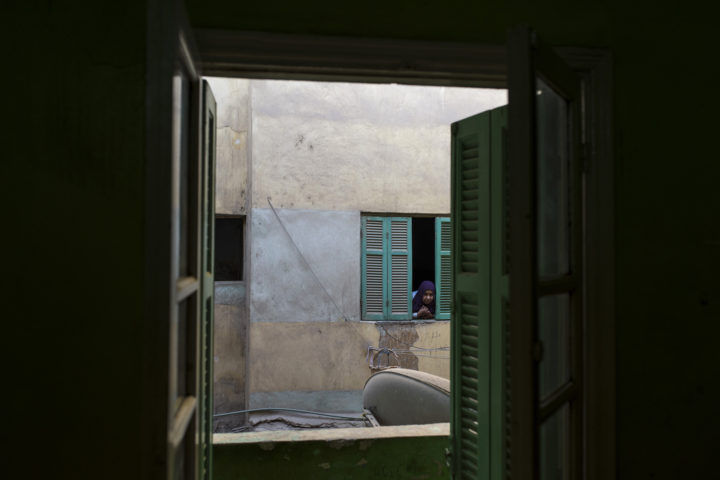 Taking part in the revolution caused me to think critically in a way that led me to reject much of the social status quo pervasive in my community. However, I soon began to face opposition from neighbors for expressing non-traditional social beliefs when I began to more openly challenge societal norms on social media. My neighbors eventually took it upon themselves to tarnish my reputation within the community at large . . .

Houses are often in close proximity to one another, affording minimal privacy and an optimal environment for neighbors to easily — and often, quite literally — peer into your daily life. I eventually found myself subjected to an unbearable form of both mind and body control.

After I moved out of my family home and across Cairo, I sought out other individuals who had undergone similar experiences. This photo series seeks to capture our stories, and has come to be known collectively as “revolution of the mind.”