Peter Orszag has a column about the diminishing share of labor in national income, relative to capital. Mike Konczal provides some useful additional discussion. Both of them frame the issue as a new empirical mystery, because it contradicts a “stylized fact” that economists have long assumed about capitalist economies: that the relative share of labor and capital in national income remains constant over time.

I try to avoid the characteristic sociologist’s vice of economics-bashing, but this does rather strike me as a case where economists are betraying their insularity by purporting to discover something that other social scientists are already talking about. Mike quotes (the generally excellent) Arjun Jayadev musing that “A more comprehensive account should really take a look at the politics of this shift and there is some evidence for the contention that an eroded bargaining power of labor is an important factor.” As it turns out, someone has looked at “the politics,” although they’re not an economist. Last year, the American Sociological Review published a paper called “Good Times, Bad Times: Postwar Labor’s Share of National Income in Capitalist Democracies” by Tali Kristal of the University of Haifa, which bears directly on this issue. (An un-gated version is here.)

One of the tricky things about explaining long-term economic trends is that we don’t have access to the counterfactual: what would the US economy look like if, say, we still had 1950s levels of unionization? As a next-best solution, though, we can contextualize the United States by comparing it to other rich countries. The global economy is characterized, as Trotsky put it, by “combined and uneven development”: while the declining share of labor income is a cross-national phenomenon, it has not been experienced or responded to in exactly the same way everywhere. Kristal’s paper compares the US to fifteen other countries in the period since 1960, in an attempt to identify some of the factors behind labor’s declining income share.

Even if you don’t want to wade through the text, I highly recommend giving it at least a “quant-jock read” — that is, have a look through the charts and tables. I’ll try to summarize the main argument and findings of the paper here. Kristal shows that Labor’s share of income has risen and fallen over the past century, “stylized facts” notwithstanding. In the United States and and the UK, much of the increase in labor’s share took place before and immediately after World War II; there was a substantial postwar increase in continental Europe, the Nordic countries, Australia, and Japan. Since 1980, labor’s share has generally declined everywhere. But the scope and timing of this decline differs across countries, indicating that the relative position of capital and labor is related to the economic and political particularities of the countries.

The assumption that labor’s share of income is constant implies that gains in national income due to increasing productivity are always shared equally by labor and capital. Kristal shows that this is not the case: in the 1960s and 1970s, labor income grew as fast as or even faster than productivity, whereas since 1980 labor income has lagged far behind. In other words, this pattern is valid cross-nationally: 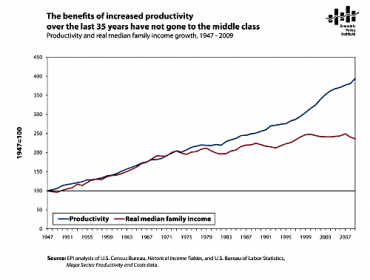 Kristal makes the interesting point that this dynamic isn’t necessarily related to the much more studied phenomenon of rising income inequality. Income inequality could increase if one group of workers captured most of the wage gains, which would keep the overall labor share of income constant. And as Kristal wryly notes, studies of income inequality “tend to identify the capitalist class as a subset of the self-employed.”

In attempting to explain the changing fortunes of labor, economists are generally inclined to reach for explanations rooted in the market rather than the political sphere. Thus, as Kristal explains, the two leading explanations for the declining labor share of income have been technology (i.e., the adoption of labor-saving production techniques) and worker bargaining power (declining unionization, competition from abroad). But workers can alter their share of income by political means that go beyond the immediate power of unions in wage bargaining. When social democratic parties are in power, they can shift income shares by shielding workers from market forces, expanding public employment, and regulating the workplace, as well as by taking steps to strengthen labor unions.

Kristal attempts to capture these dynamics with a regression-based analysis, in which labor’s income share in a given year is predicted based on both economic and political variables. Changes in productivity, inflation, unemployment, union power, the strength of left parties in government, and several measures of economic globalization are all combined in the model. To quote from Kristal’s conclusion:

Labor’s share of national income increased in the 1960s and 1970s due to unions organizing new members, the surge in strike activity, and the consolidation of the welfare state. These factors all increased labor’s compensation faster than the economy’s income. Labor’s share declined since the early 1980s with the decline in unionization rates and levels of strike activity, stagnation in government civilian spending, and bargaining decentralization. Labor’s capacity to influence state policies has also declined across countries, and governments’ targets of full employment have been abandoned in favor of labor market flexibility and low inflation. The current decline in labor’s share of the national income can also be traced to an increase in imports from developing countries and the increased presence of foreign affiliates of multinational firms.

Technology, meanwhile, looks like it is not an independent source of labor’s diminishing share. That is, while increasing productivity is associated with a lower labor share of income, this association has alwaysbeen present, even in the earlier periods when productivity growth and income growth matched up in the aggregate. What has changed is the countervailing political factors that used to ensure that a share of economic growth was paid out to workers.

You can question some of the particulars of the modeling that leads to this conclusion, and in general it’s hard to disentangle the causal relations in this kind of bird’s eye view quantitative analysis. But as an overall correlational picture of what’s happened to labor in the past 50 years, I think there’s a lot in this analysis that people can learn from — maybe even economists.