Not long after the war in Ukraine broke out in February, liberal institutions began to ban Russian musicians, writers, and artists as well as other cultural symbols seen as too close to the regime. Within this fractious climate, the role of a dissident writer — part of a belligerent nation but not complicit to its crimes — has taken on a renewed geopolitical significance on the European continent. Within this context, the Russian writer and author of some fifteen novels, as well as several plays and short stories, Vladimir Sorokin, has made a name for himself as a critic of both Soviet bureaucratic authoritarianism and the return to what he has interpreted as neo-tsarism under Vladimir Putin.

During the optimistic times of rapid economic growth in the early Putin years, Sorokin published the novel Day of the Oprichnik (2006). In it he imagined (or foreshadowed) an isolationist Russia, hiding behind a militarized wall and governed by tsarist absolutism. Within this regime, state-backed thugs beat up intellectuals and commit atrocities. The hardening of authoritarian expression in Russia over the last few years has turned the irreverent Sorokin into something of a prophet and cultural icon, celebrated as a fierce critic of his country’s worst tendencies.

Sorokin’s most recent offering to be translated into English, Telluria, consolidates this reputation as a prescient messenger of incoming dystopia. In it he turns his attention not simply to Russia but to Western Europe, embroiled in endless rounds of war and spiritually sick to the core. Sorokin’s prose isn’t for the fainthearted; Telluria is no exception. Obscenities, pedophiliac references, scatological digressions, convoluted and often unexplained lore, and fantastical characters are the norm. These are the ingredients of a typical Sorokinian feast.

Telluria is a genre-bending work of speculative fiction set in the aftermath of a near-global civil war in which European fiefdoms triumphed over “Wahhabis.” To nurture this violent hangover, people resort to and compete over a rare coveted substance, tellurium, a VIP drug that induces bliss — or death. 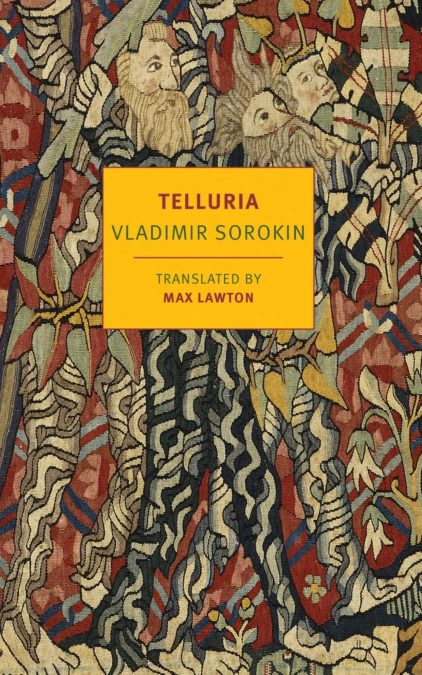 Each of the book’s fifty chapters explores a different point of view. Geographical or situational continuity occurs, but we often approach chapters through singular vignettes which sketch an impressionistic, kaleidoscopic snapshot of this distorted, dystopian world. In doing so, Sorokin deploys literary dexterity switching from epistolary correspondence, intimate prayer, war memo, multicharacter scenes, and more, with an exacting and frantic sense of urgency.

For instance, in Chapter 16, a third-class operator at the Russian Orthodox Foundry asks for money and permission to take tellurium and “visit” his late brother, accused of having stolen and kept hidden liquid cutters from a workshop. “My meeting with my deceased brother will very much aid our workshop and our factory and it shall also help our family to restore the good name of my brother Nikolai,” S. I. Ivanov writes, not without having this initiative first blessed by a man of faith. Here we find in this microcosm a collection of Sorokin’s obsessions: the farce of bureaucracies, the alienation of a productivist ethos, and the ineradicability of religious irrationality.

The book introduces a new lexicon for this terrifying world composed in equal parts of postmodernism and feudalism. We stumble across “brass knuckles,” described by one character as “demons possessed by Socialist-Revolutionary propaganda going out to the streets and destroying all of our painstaking work in a single blow.” “Carpenters” help administer tellurium (to others, never to themselves), a process which involves hammering a nail or wedge into a shaved skull, an undertaking not without risks. “Bosorogos” indicates when a nail is successfully inserted into a client’s brain, as opposed to an unsuccessful “tornado,” which may require the use of an “argada” or special helmet to hold a client’s head during emergencies. That tellurium is “tested,” implies a sense of lingering uncertainty concerning its properties and the potential outcomes of its use. But these are risks with which Sorokin’s characters are either too depraved or desperate to concern themselves.

In Chapter 15, we encounter Ariel, a fourteen-year-old “comandante” from Almería in Spain. He visits a carpenter, well-prepared with his own tellurium nail and cash in hand. Unfortunately for Ariel, his fingerprint betrays his age — even for carpenters selling tellurium to minors crosses a line. Diplomatically, Ariel seeks to dissuade the dealer of their hang-ups: “I’m a grown up,” he tells them. Why? “Because I killed nine Wahhabis, severely wounded four, and lightly wounded eighteen,” he adds. Unmoved by the boy’s pleading, the carpenters send poor Ariel away and he is forced to turn to a “riveter.” These are a lower tier, shadier sort of carpenter, less exercised by the life-endangering risks of tellurium, which in their hands increase to 68 percent.

Sorokin has a knack for showing that if you scratch even lightly beneath the surface of hedonistic or self-destructive desire there is often a kernel of something spiritual and vulnerable. High on tellurium Ariel pays for the services of a sex worker, but is unable to climax, his thoughts are elsewhere. Whilst she rides the boy’s prone body his mind drifts, in an almost biblical passage, to the battlefield:

And Ariel found himself in the city of battle. And people were killing each other in this city. And many people were lying dead upon the ground, but many were still living as well. And fury filled the hearts of the living. And they killed the opponents of their faith.

Telluria plays with history creating a sense of disorientation that mirrors the effect of tellurium. In Sorokin’s world, medieval and futuristic motifs sit awkwardly beside one another: confused travelers consult disembodied hologram aides for advice; a party campaigns on the slogan of “Glory to the Cosmos!”; and an absurdist prayer gives thanks to the “Stakhanovite initiative of the nationwide nanotechnology of the Holy Spirit”; and a council of carpenters in Switzerland act as postmodern Freemasons.

Halfway through the book we finally discover Ohlàlà, the capital of Telluria, an opulent republic in the Altai Mountains established in 2028 and led by Jean-François Trocard. The Democratic Republic of Telluria is a narco-state, the only place where the precious substance is decriminalized, and for that reason, other countries have considered the republic a pariah state.

Through a wide-ranging, dizzying tableau of people and places, Sorokin gives body and voice to a postapocalyptic world not too dissimilar from our own. As well as Russia, a familiar object of contemplation and critique for Sorokin, in his past novels we are transported to Sweden, Spain, Germany, and other locations. Roughly, Sorokin’s world is divided between a stagnant and declining West and a dominant East, the latter comprised of the Wahhabis and Salafists, but also Asians and chiefly, the Chinese. Between Old World and the East, Russia exist and exhibits the pathologies of both — a project to build a Great Wall of Russia was abandoned (“the bricks were plundered,” one character bemoans).

Moving from Sorokin’s usual focus of Russia (Soviet and post-Soviet), Telluria turns its attention to Europe, Asia, and the Middle East. The atrophy which he had previously observed in his past novels is in Telluria generalized. What we are confronted with is a cold autopsy of decline long in the making. Its symptoms are dissolved identities and political disintegration. Within this world collective nihilism drives those lucky enough to escape from war to the comfort of tellurium, the new opium of the people.

Born in 1955, Sorokin’s voice is characterized by playful disenchantment both of the Soviet experiment and the capitalists disaster that followed its collapse. In an essay published by the Guardian shortly after the start of the war in Ukraine, Sorokin — who now lives in Germany having left his home country a few days before the war broke out — sketches a genealogy of Russian imperial ambitions, from Ivan the Terrible to Putin.

Sorokin’s unflinching belief in the impossibility of either redemption or reform for his homeland shapes a worldview that bleeds into literature. For him, Russia is trapped in a cycle unable to break into modernity: “I saw some signs of change in Russian society that smelled like the Middle Ages,” he said in a recent New York Times profile. This daily “medieval scent” would continue to haunt him, permeating through into his fiction. However, the danger of assuming such a posture is that it can easily transform into self-caricature, transforming the dissident artist into a mere provocateur.

In an interview with Untranslated, Max Lawton, the translator of Telluria as well several of the Russian writer’s other works, affectionately spoke of “Sorokinian-what-the-fuckness.” Sorokin’s writings have made him into somewhat of a pariah in his country of birth, scorned by reactionaries unhappy with even a modest criticism of their country’s authoritarianism.

But provocation is, of course, always a relative concept. Outside of his country of origin, assertions, such as the one he makes in his Guardian article, that “the principle of Russian power hasn’t even remotely changed in the last five centuries” run the risk of flattening the complexities of a nation which Westerners are already prone to painting with a broad brush. The dilemma is that it is precisely these rough and blurred images which lend Sorokin’s work such vibrancy. The question is, to what use will they be put in a world increasingly losing its ability to find pleasure in the absurd?