At the zenith of the Reagan revolution and since, the market has consistently been defended on grounds of its supposed efficiency. Market outcomes, or so the argument goes, may not always yield egalitarian results but they do at least allocate resources effectively and reward productive activity. But evidence is plentiful that the hyper-financialization of America’s economy has actually had something like the opposite effect.

According to findings from the Economic Policy Institute, the growth in worker productivity over the past seventy years hasn’t been mirrored by anything like a commensurate increase in wages. In recent decades, however, compensation for those now at the commanding heights of financial activity has ballooned — average Wall Street bonuses growing by an astonishing 1,743 percent since 1985 when adjusted for inflation (had the minimum wage grown at the same rate, it would currently be $61.75 rather than a meager $7.25). 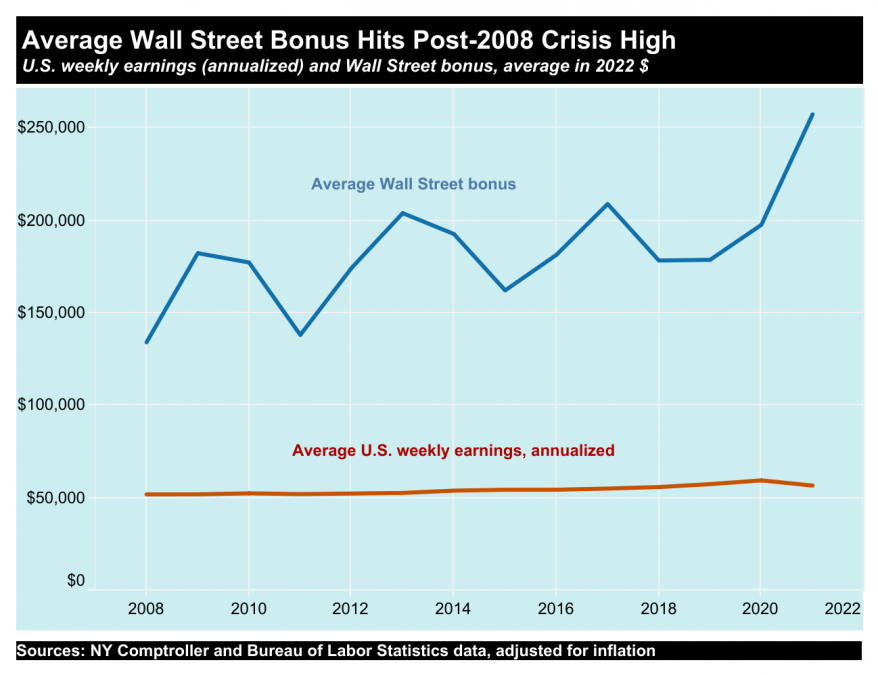 The breathtaking extent of this growth is dramatically illustrated in a new report from the Institute for Policy Studies’ Sarah Anderson, which finds that the average Wall Street bonus in 2021 was $257,500, up 20 percent from 2020 and significantly higher than in any year since the 2008 financial crash.

The jump is particularly notable in light of ongoing debates concerning inflation and the cost of living. As Anderson observes, the rise in Wall Street bonuses considerably outstripped the annual inflation rate of 7 percent — a rate that itself outpaced the comparatively small 2 percent increase in average weekly earnings among private sector workers. And that’s to say nothing of base salaries on Wall Street, which themselves averaged over a quarter of a million dollars last year. 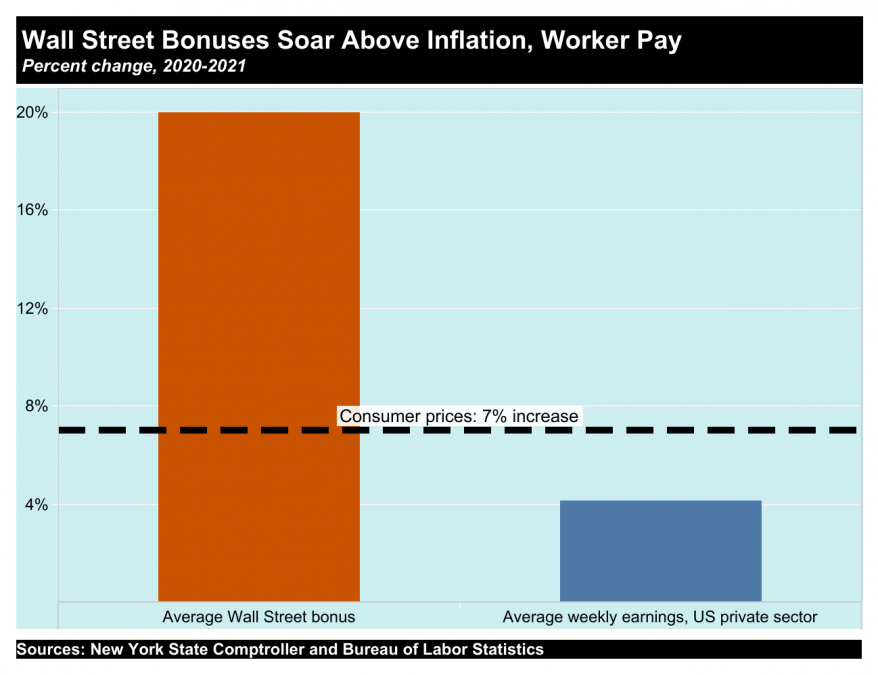 All in all, finds Anderson, the bonus pool alone for Wall Street’s privileged workforce of 180,000 was $45 billion — enough to sustain a million jobs paying $15 an hour for an entire year.

Nearly fifteen years on from the 2008 meltdown and in the wake of the significant economic downturn wrought by the coronavirus pandemic, the continued explosion of Wall Street bonuses is yet a further reminder of the American economy’s fundamental inefficiency. While workers becoming vastly more productive yields limited gains for the broad majority, even a massive financial implosion like 2008 has done nothing to arrest the runaway greed of the country’s economic elite.

As Anderson points out, even the relatively modest provision in 2010’s Dodd-Frank legislation designed to curb out of control Wall Street pay has yet to be implemented — thanks in large part to the industry’s successful capture of Congress and its efforts at lobbying. At the same time, Democrats last year failed to pass a promised increase in the minimum wage, which hasn’t been raised even once since July 2009.

Following Reaganism’s successful conquest of American politics in the 1980s and the corresponding financialization of the economy, it’s been an axiom in both major parties that reigning in the market inevitably does more harm than good — even for those at the bottom of the economic pyramid. Particularly in the wake of 2008 and since essential workers bore the brunt of the pandemic, this already untenable premise has been impossible to sustain.

Simply letting the markets rip has yielded regular instability. More to the point, it’s allowed gains to accrue to an increasingly narrow class at the top whose rewards often bear no relation to productivity or actual value created. Regulating and reigning in America’s hyper-financialized economy is therefore urgent, overdue, and the absolute minimum required to create an economic settlement in which the workers who perform the essential labor that sustains daily life collect the share of wealth they actually deserve.