In a last-ditch attempt to rescue Democrats from their own worst instincts, Senator Bernie Sanders (Independent from Vermont) is working to try to limit the party’s politically toxic initiative to enrich wealthy property owners in liberal locales. If his maneuver fails, Republicans will have a potent political weapon heading into the 2022 midterms, as evidenced by a new video the GOP just released on Monday.

At issue is corporate Democrats’ proposal to raise the amount of state and local taxes (SALT) that can be deducted from households’ federal taxes. The $275 billion proposal is now the second largest part of the Build Back Better legislation, even though it would only benefit the 13 percent of Americans who itemize their tax returns.

For months, our reporting has warned that a repeal of the $10,000 cap on such deductions would be a massive tax cut for the superrich, including for key Democratic lawmakers who are championing the measure. The GOP has been hammering Democrats over the proposal, saying it proves Democrats are trying to help the wealthy. Their new video previews how Republicans will depict themselves as populist critics of regressive tax cuts ahead of the 2022 midterm elections, if Democrats pass their current SALT initiative.

But that’s where Sanders — a longtime critic of raising the SALT deduction cap — comes in.

After House Democrats last week passed President Joe Biden’s Build Back Better bill with provisions raising the SALT caps to $80,000, the Vermont senator joined with New Jersey Democratic senator Bob Menendez to propose a more limited version. Though their proposal is not finalized, it is intended to phase out the new tax breaks for those making more than $400,000 a year. The proposal broadly mimics a plan released by the Institute for Taxation and Economic Policy (ITEP).

A new study from the Tax Policy Center (TPC) shows how the plan stacks up. 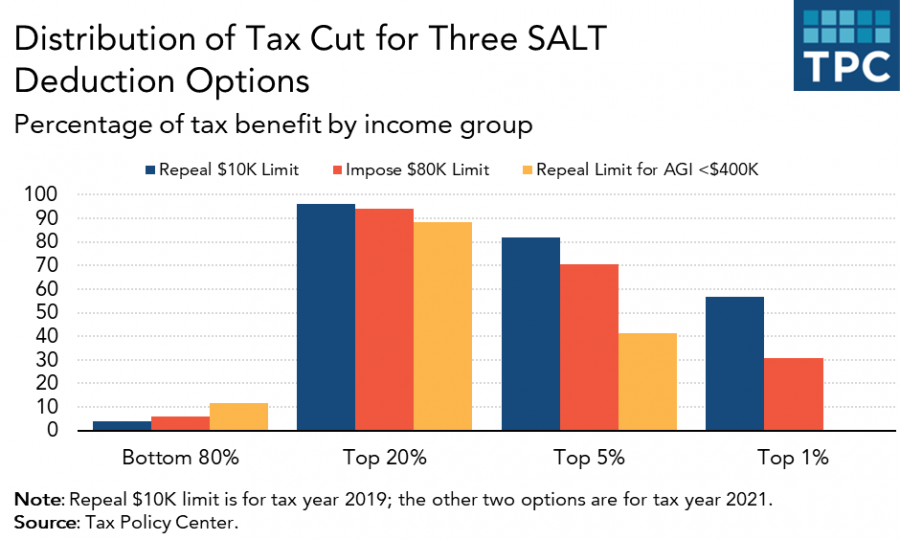 As the TPC graph illustrates, one of these proposals is clearly better from a policy and messaging standpoint — while all of them would deliver most of their benefits to the wealthiest quintile of the country, the Sanders-Menendez compromise (represented by the yellow bars) would specifically reduce the amount of tax breaks given to the richest of the rich.

Democratic proponents of simply raising or repealing the cap have continued to deliberately promote fact-free misinformation about their proposal’s effects, pretending the new deductions would mostly help firefighters, teachers, and other middle-class households. Tax data prove that assertion is a flagrant Donald Trump–esque lie — the vast majority of the benefits of proposed new SALT deductions would flow to the very rich.

In addition to blatant lying, Democrats promoting a higher SALT deduction cap have refused to embrace the ITEP plan. That refusal suggests that corporate Democrats’ real goal in raising the SALT cap isn’t to protect the middle class, but is instead to enrich the wealthy blue-state donor class — a charge that Republicans will no doubt intensify if nothing changes.

For his part, Sanders has called the House-passed proposal “bad policy” and “bad politics” — and his initiative seems designed to make the politics at least a bit better, although his plan is hardly perfect.

“If you actually cared about (the middle class), you could set the cutoff at say, $150,000,” Marc Goldwein of the Committee for a Responsible Federal Budget told the Pittsburgh Post-Gazette. “That would still mean the biggest benefit would go to people making $150,000, but it would address that actual middle class population. If you’re setting the [cutoff] at $400,000 or $500,000, you’re not doing this for the middle class.”

The higher caps would be designed to simultaneously limit the benefits to the rich, but also keep enough wealthy-district Democratic lawmakers from voting to kill the entire Build Back Better legislation. And if the Senate adopts the Sanders-Menendez proposal, it would at least deprive Republicans of their new talking points that depict Democrats as more focused on enriching their billionaires than on helping the country.

“Democrats Now Are Easier On Millionaires”

The recent Republican criticism of Democrats’ SALT proposals already has salience amid polls showing most Americans see Democrats as out of touch with the country. At least some of Sanders’s Democratic colleagues seem to see the political problem with passing the $80,000 SALT cap increase, which would give an average tax cut of $16,000 to two-thirds of Americans who make more than $1 million a year.

“Republicans are making the argument vociferously and repeatedly that they’re going to say that Democrats now are easier on millionaires than they were in 2017,” Senator Ron Wyden (Democrat from Oregon) told NBC News.

“It would be preposterous if this legislation ends up cutting taxes for the wealthiest people in America,” Democratic senator Michael Bennet of Colorado told Business Insider.

If Senate Democrats adopt the Sanders-Menendez provision as part of that chamber’s version of the Build Back Better legislation, it would force corporate Democrats into the position of either accepting the measure and letting Biden’s bill pass, or holding up the legislation and fighting exclusively for tax breaks for households that make more than $400,000.

In that scenario, Republican lawmakers and the wealthy would be hoping corporate Democrats choose the latter course. If they do, the GOP would get its political bailout — and wealthy donors would get their financial one, too.