The last time Democrats held the presidency and Congress, the party spent its first year in power enriching big banks that had cratered the economy and then letting public money subsidize the Wall Street bonuses of their campaign donors. The spectacle gave Republicans a political bailout in the 2010 midterms, allowing the GOP to depict itself as anti-establishment populists challenging an elitist government.

Twelve years later, history is rhyming. Democrats were vaulted into office on popular promises to tax the wealthy, but they are now generating national headlines about their proposal to provide new tax breaks narrowly targeted to enrich their affluent blue-state donors, just as a new survey shows nearly two-thirds of Americans see the party as “out of touch with the concerns of most people.” And now the Republican machine is already gearing up to demagogue the issue in 2022.

The situation is like a storyline from Veep satirizing blue-state elitism: As millions of voters are being crushed by health care costs and higher energy prices, and as Democratic lawmakers have abandoned a $15 minimum wage, Democratic leaders are pushing a regressive proposal to allow wealthy property owners to deduct more of their their state and local taxes (SALT) from their federal taxes.

This initiative, which would provide almost no benefit to the working class, isn’t some small tweak. After Democrats gutted their wildly popular initiatives to expand Medicare and lower drug prices, the tax initiative has now become one of the most expensive provisions in the entire Build Back Better (BBB) legislation.

The whole initiative seems deliberately sculpted to hand the American Right a weapon to bludgeon Democrats ahead of the election. Indeed, you can imagine it being Fox News’s latest “Entitlement Nation” segment — only rather than dishonestly bashing poor people, Fox could accurately cast entitled blue-state yuppies as the ones being enriched by this Democratic policy.

Under current law, the relatively small number of Americans wealthy enough to itemize their tax returns are barred from writing more than $10,000 of their state and local tax levies off their federal tax returns. In 2019, that was just 13 percent of Americans.

That means the entire SALT debate is about a policy almost exclusively affecting a small number of rich people, who already disproportionately benefit from other tax breaks, like the home mortgage interest deduction. And really, it’s even smaller than meets the eye — it is about the miniscule number of rich folk who happen to live in specific locales with high state and local levies and who pay more than $10,000 of those levies every year.

Somehow, giving this tiny group of rich people more tax breaks is “an important priority” for Democrats’ social spending reconciliation package, according to House speaker Nancy Pelosi, who has been pushing the proposal with Senate majority leader Chuck Schumer.

Mimicking Republicans who lied through their teeth pretending estate tax cuts help poor farmers, Democratic lawmakers from wealthy districts — and even some union leaders — have spent months telling a different story. Brushing aside criticism from the few outspoken Democratic opponents of a SALT cap repeal, they have insisted that a repeal or hike of this $10,000 cap would mostly help “hard-working middle class families,” as a group of affluent blue-district Democrats recently claimed.

But a new Tax Policy Center analysis of the current Build Back Better legislation lays bare that flagrant lie.

It shows that while the Build Back Better reconciliation bill would still raise taxes on billionaires, adding SALT deductions to the bill would provide no significant help for the middle class and would result in big tax breaks for very rich people just below the billionaire stratosphere.

In all, raising the SALT cap would result in a BBB bill in which two-thirds of Americans who make over $1 million get a tax cut, and the average reduction for those households would be more than $16,000.

“Despite what its promoters say, raising the cap to $80,000 would provide almost no benefit for middle-income households,” wrote Howard Gleckman of Forbes, a publication that is not exactly a bastion of anti-capitalist ideology. “It would reduce their 2021 taxes by an average of only $20. Even those making between $175,00 and $250,000 would get a tax cut of just over $400 or about 0.2 percent of after-tax income. By contrast, the higher SALT cap would boost after-tax incomes by 1.2 percent for those making between about $370,000 and $870,000.” 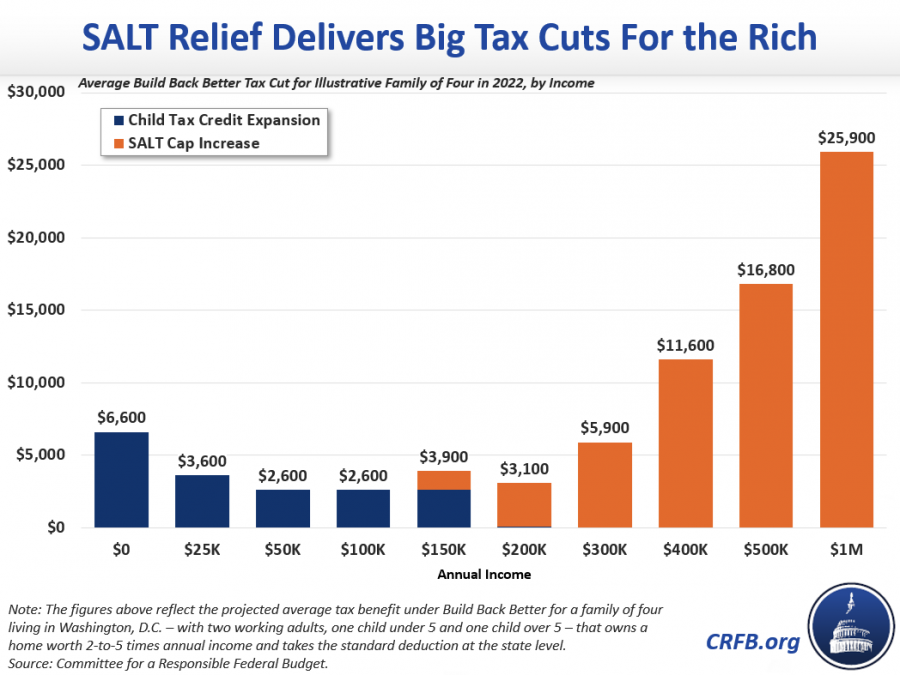 In a nation where 87 percent of people already make too little to itemize their tax returns and are therefore not eligible for any SALT deductions, Democrats’ whole campaign is designed to confuse and distract from all the data showing that repealing the SALT cap would be a more regressive policy than Donald Trump’s 2017 tax cuts and would exacerbate racial and economic inequality.

It’s such an embarrassing giveaway to the rich that even New Jersey’s corporate-friendly senator Bob Menendez, whose state has relatively high taxes, derided the initiative, saying it “would mostly benefit millionaires and at the expense of middle-class families.” Indeed, even in the Garden State, 92 percent of a full cap repeal would flow to the richest 15 percent of the population, leaving everyone else in the state with almost no benefit at all.

But precisely because a group of high-profile corporate Democrats have insisted on constantly lying to their blue-state constituents and pretending a SALT cap repeal is mostly for the middle class, many of their voters have almost certainly been convinced they are being crushed by the SALT cap.

This, even though many of those households are among the majority of Americans taking the standard deduction and are therefore not even eligible for SALT deductions in the first place.

Realizing these aforementioned facts were irrefutable, Democrats and their allies recently tried a different tactic — two union leaders published an op-ed asserting that “the SALT deduction is a tax break you receive for supporting your community” by paying higher state and local levies for schools and public services. A group of congressional Democrats also claimed that the SALT deduction cap has led to “wealthy taxpayers leaving high-cost-of-living states” for low-tax jurisdictions.

The arguments fell flat because they are ridiculous. There are simple ways to more surgically reform the federal tax code to support communities without nakedly funneling tons of cash to billionaires — and those who reject that truth are either too ignorant, too unimaginative, or too corrupt to acknowledge an alternative. Meanwhile, there is scant evidence that the SALT cap has prompted mass tax migration. As Bloomberg News recently reported in a story citing IRS data, the cap “had a negligible initial impact on the nation’s domestic migration patterns.”

In other words, the entire argument is another cynical lie.

That raises the big questions: Why is there this much lying about this? Why are Democrats treating a hike in the SALT cap as such a must-pass part of their economic agenda?

Two reasons — both of which illustrate the Democratic Party’s core motives.

For all of its rhetorical paeans to hard-hit communities of color, the Democratic Party first and foremost answers to the donor class concentrated in these rich locales, and that donor class covets the return of tax breaks for its McMansions (as do the wealthy congresspeople who stand to personally benefit from a SALT cap repeal).

Just as significant, though, is the motivating power of tribal partisanship.

Corporate Democrats who want to enrich their donors with a cap repeal are constantly reminding liberals that the cap was originally imposed by the boogeyman Donald Trump, whose motive was revenge. He wanted to punish blue-state donors that funded his opposition, and a SALT cap was the perfect way to do that.

But motives aside, the policy itself made sense: It actually limited a few giant tax breaks for the nation’s richest people, even if the point was vindictiveness and a revenue raiser to help finance other tax cuts for the wealthy and corporations.

Left without a compelling argument for repealing the cap and enriching their donors, corporate Democrats have weaponized the Trump origin story, trying to gin up support for the initiative by cynically weaponizing Team Blue’s partisan hatred of the former Republican president.

In effect, these Democrats are suggesting that the best way for liberals to get back at Trump is to pass a tax policy that provides coastal millionaires lucrative new tax breaks, gives the middle class almost nothing, and hands Republican politicians a political cudgel.

Handing the GOP a Populist Argument Against Elitism

The Joe Biden presidency’s first year began with Democrats saying and at times acting like they had learned the cautionary lessons of the Barack Obama era. They were pushing initiatives to raise the minimum wage, expand Medicare, lower drug prices, and create paid leave. The year is now ending with Democrats’ poll numbers plummeting as they make headlines reneging on those promises and instead demanding SALT tax cuts for affluent locales.

This is a dream scenario for Republicans. Even though they have nothing better to offer, they are getting another political bailout from a Democratic Party that is still captured by its affluent donors.

The GOP seems to sense the opportunity already. Its media and political apparatus is already weaponizing the SALT proposals ahead of the 2022 elections.

The Wall Street Journal editorial page and the Heritage Foundation are deriding Democrats for trying to give new tax breaks to the wealthy. Similarly, senator Tim Scott (Republican from South Carolina) recently tweeted, “The Democrats’ SALT tax deduction is almost exclusively a tax cut for the rich. They’re out here yelling ‘tax the rich’ while crafting handouts for the wealthy behind closed doors.”

In October, Senate minority leader Mitch McConnell (Republican from Kentucky) criticized “Democrats’ obsession with the so-called SALT cap,” saying: “Even as our colleagues draft the biggest tax hikes in half a century, they cannot resist the concept of special tax cuts for high earners in blue states.”

Democrats could deny Republicans these powerful talking points by leaving the cap in place or at least shrinking down a reform proposal so that it doesn’t so blatantly enrich the super wealthy.

But if Democrats instead follow through and enact their current proposal, the GOP rhetoric is likely a preview of what’s to come in the 2022 election. It could be a redux of some of the Tea Party’s most effective clarion calls during the 2010 midterms.

Only this time around, the GOP claims that Democrats are secretly working to enrich their elite donors would actually be true — and it will be boosted by millions of dollars of television ads designed to enrage swing voters.

Many of them are already frustrated about Democrats’ betrayals. Democrats now leaning into a tax policy easily caricatured as elitist threatens to turn that frustration into yet another midterm shellacking.