Science has provided America with a decent idea of which areas of our country will be most devastated by climate change, and which areas will be most insulated from the worst effects. Unfortunately, it seems that population flows are going in the wrong direction — today’s new Census data shows a nation moving out of the safer areas and into some of the most dangerous places of all.

The Census Bureau’s new map of the last decade’s population trends shows big growth in the West and on the coasts — and declines in the inland East Coast and Great Lakes region. 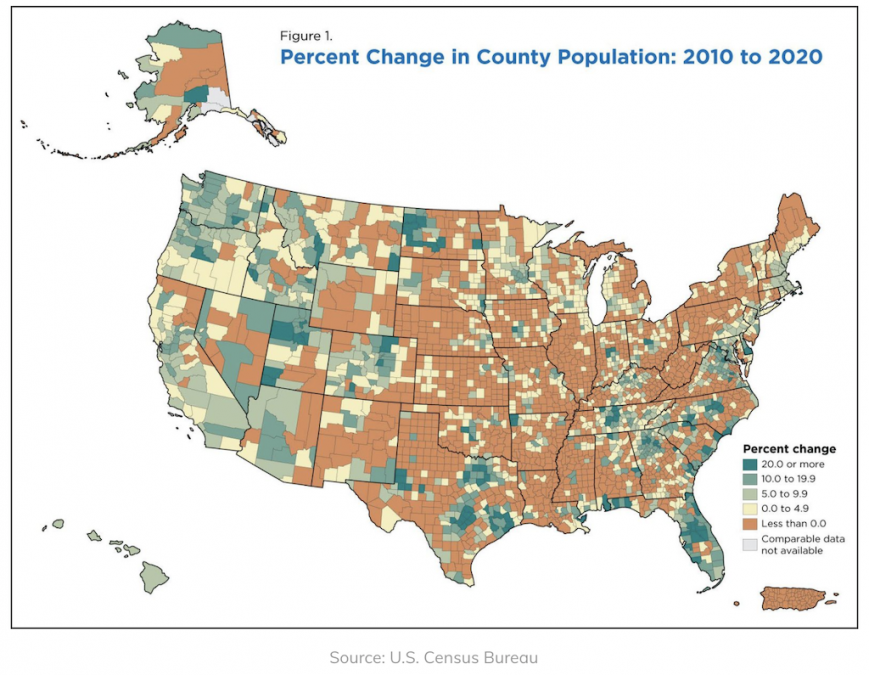 Now compare that map to ProPublica maps documenting the areas most at risk of extreme heat, wildfires, and flooding, and you see the problem. While there has been some recent anecdotal evidence of pragmatic climate migration, overall the Census data shows America’s population growth is shifting out of areas that may be the best refuges from the most extreme effects of climate change, and into many areas that are most at risk.

Put another way: If climate change were an enemy in a war, America is not fortifying our population in the safest places — the country’s population is moving into the areas most at risk of attack.

Some of the examples are genuinely mind-boggling. For instance, upstate New York is considered one of the country’s most insulated regions in the climate crisis — and yet almost all of upstate New York saw population either nearly flat or declining. At the same time, there were big population increases in and around the Texas gulf coast, which is threatened by extreme heat and coastal flooding.

Similarly, the city of Philadelphia is comparatively well-situated in the climate crisis — but it saw only modest population growth of 5 percent. It was surpassed on the list of biggest cities by Phoenix, which saw an 11 percent population growth, despite that city facing some of the worst forms of extreme heat and drought in the entire country.

And then there is South Florida, which saw Miami clock in a 10 percent population increase despite the possibility that large swaths of the city could soon be underwater. Compare that to a place like Vermont, where the population growth was flat.

This isn’t to blame Americans for moving to climate-threatened regions — after all, population growth and decline is often driven by the quest for necessities such as affordable housing and jobs. But the census data illustrate a trend that has been exacerbated by public policy.

For instance, weak zoning and land-use laws have encouraged a population explosion in the fire-prone wildland-urban interface, areas near forests and other vegetation. Likewise, federal flood insurance subsidies have encouraged continued construction in coastal areas threatened by flooding. And corporations have not yet been forced to disclose their climate risks to investors, which potentially allows them to make investment and location decisions without factoring in such vulnerabilities.

There are ways to change the policies — for instance there has been a push to change zoning laws in ways that discourage or prohibit construction in areas most prone to wildfires. In May, President Joe Biden issued an executive order requiring federally funded infrastructure to take into account current and future flood risks during construction, and the Securities and Exchange Commission is preparing a rule to require climate risk disclosures from all public companies.

But, as the census data suggest, the Biden administration has a long way to go.

The Federal Emergency Management Agency (FEMA), which runs the national flood insurance program, has long been underfunded and mostly helps wealthy and white homeowners. Moreover, a recent Government Accountability Office report found that while FEMA has good information about flood risk to homeowners, it has not acted on that information to encourage homeowners to buy flood insurance. The report called on Congress to update the mandatory purchase requirement for flood insurance.

Meanwhile, homeowners have struggled to access buyout funds for flood prone properties, which crucially encourage people to move out of high risk areas and reduce the costs of future cleanup after disasters. Some parts of California have considered using that FEMA aid for buyouts in wildfire-prone areas.

This spring, FEMA updated its methodology for pricing flood insurance to make it more equitable and adapt to climate change.

But, of course, many of the efforts to fix those policies — or at least force them to factor in climate risks — now face vociferous opposition from powerful Republicans in Washington.

They want to pretend that nothing must fundamentally change — even though we’re already seeing that everything is changing faster than ever.