The Bureau of Labor Statistics released its monthly inflation report a couple of weeks ago. The headline statistic is that prices increased by 4.2 percent from April of last year and 0.8 percent from the prior month. Taken alone, these headline numbers might cause alarm for some, but once you dig into the report, you find that these increases are not primarily driven by general price rises across the economy but instead by price rises for three specific items: hotels, airline fares, and used cars. 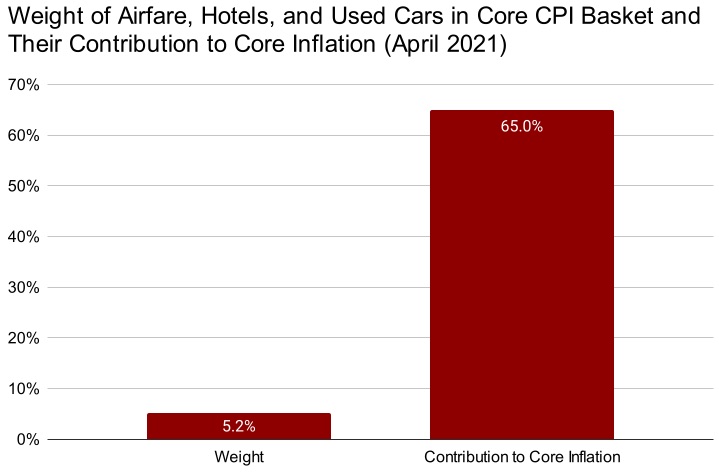 The fact that airfare and hotel prices rose a lot last month likely indicates a big spike in travel driven by spring break and coronavirus vaccination. These two industries are also much more reliant on dynamic pricing (aka surge pricing), meaning that demand surges in those sectors are going to be more readily reflected in prices.

The main explanation people have given for the used car spike is that new car production has declined, and the reason new car production has declined is that there is a shortage of the semiconductor chips that are used to power the electronics of new cars. With fewer new cars in the pipeline, car buyers are turning to the used car market, pushing up prices.

In any event, it’s not the case that used car prices are increasing due to an escalation of wages or other producer prices in the used car sector: used cars have already been produced.

Nothing about this picture suggests that spending and inflation are out of control in a general sense. And it would be obviously ridiculous to throttle the macroeconomy in order to bring down prices on these three items.

Airlines and hotels can respond to demand surges by running more flights and opening more rooms. Or, if they can’t, then it’s perfectly fine for them to increase the price level of the scarce flights and rooms they have in order to clear the market. Such price hikes are one-off measures, not accelerating inflation.

It is certainly possible that inflation will kick up problematically at some point in the near future, but it is wrong to suggest that it has already, and it would be especially wrong to push down demand in order to try to tackle inflation at this moment.