The US Chamber of Commerce has been leading the conservative movement’s effort to block a $15 minimum wage and depict jobless workers as overly coddled layabouts who do not deserve a meager $300 of extra unemployment benefits during the pandemic. At the same time, the Chamber has paid millions of dollars to a handful of its top executives, including hundreds of thousands of dollars to some of them for only a few hours of work every week, according to documents reviewed by the Daily Poster.

As Washington’s largest spender on federal lobbying in 2020, the Chamber is widely considered the most powerful influence peddler for large corporations. Last week, the Chamber declared that “paying people not to work is dampening what should be a stronger jobs market” and called for “ending the $300 weekly supplemental unemployment benefit.” Sixteen Republican governors have followed that demand after the Chamber’s Institute for Legal Reform dumped $850,000 into the Republican Governors Association in the last few years.

The Chamber depicted unemployment benefits as overly lavish, asserting — without offering any actual proof — that too many Americans are “taking home more in unemployment than they earned working.”

Meanwhile, the Chamber has been paying millions of dollars to its top executives. 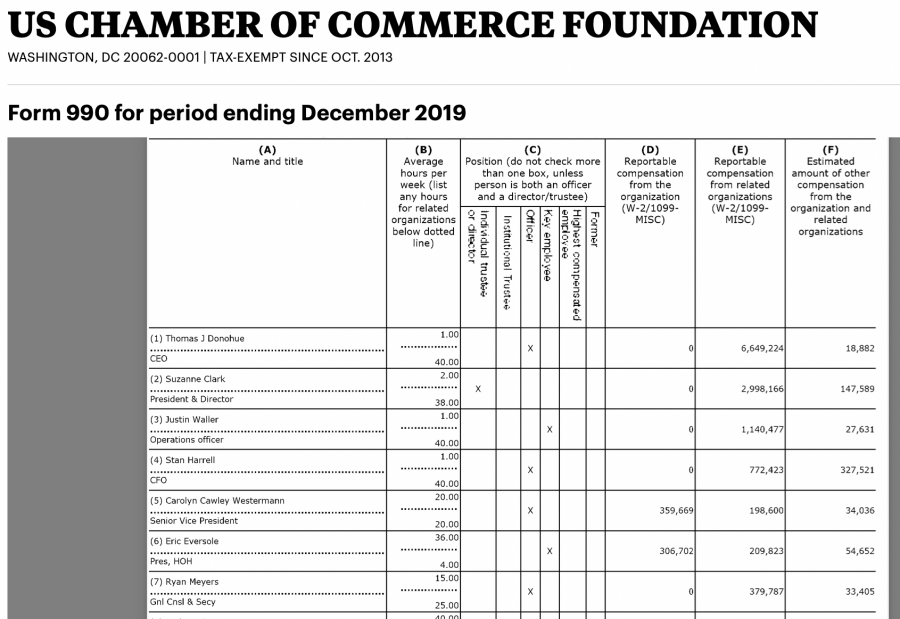 According to IRS filings, the Chamber and its affiliated organizations paid its top officials more than $87 million between 2013 and 2019. In that latter year alone, the Chamber paid seven of its top executives a combined total of nearly $13 million. Then–Chamber CEO Thomas Donahue was paid $6.6 million that year, and he remains an advisor to the organization. Two others were paid seven figures that year.

That same year, documents show that Eric Eversole, a Chamber vice president, was paid $209,000 for an average of four hours of week at one arm of the organization — a rate of about $1,000 per hour, or sixty-six times a $15 minimum wage.

Carolyn Cawley Westermann was paid $359,000 and for an average of twenty hours a week at the group’s affiliated foundation — a rate of $345 per hour, or twenty-three times a $15 minimum wage.

For comparison, $300 of unemployment benefits comes out to $7.50 per hour of survival benefits for a forty-hour work week.