Joe Biden is proposing to finance his badly needed infrastructure program by raising corporate taxes. Business mostly likes the infrastructure program — everything works better when the basics aren’t falling apart — but it doesn’t want to pay for it. Nobody likes paying taxes (well, maybe some oddballs do, but to each their own), but over the last few years, Corporate America has been enjoying the lightest tax burden in history. That needs to change.

Graphed below is the effective tax rate — the share of income that’s paid in tax, not the rate that’s on the books, which nobody pays — for nonfinancial corporations, the motor of the economy, based on data from the national income accounts. In 2020, firms paid 16.8 percent of their profits in taxes, about the same as 2019 and up slightly from 2018’s 15.0 percent. That rate, as the dotted trend line shows, has been declining steadily for decades, though the Trump tax cuts took it to fresh lows. As recently as 2005–7, firms were paying almost 30 percent. In the 1970s, the average tax rate was over 40 percent; in the 1950s, almost 50 percent. 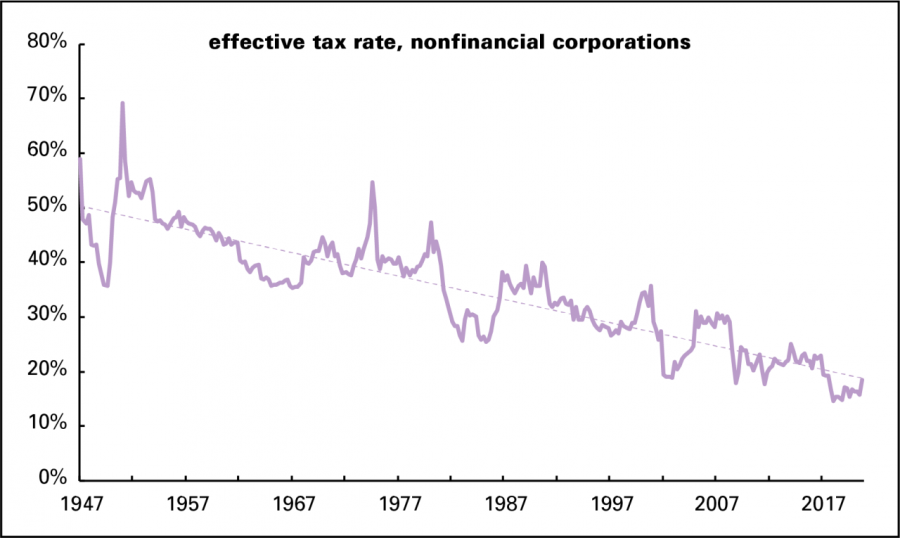 Translating those percentages into dollar terms produces some big numbers. If business were paying taxes at 2007 rates, another $162 billion a year would be flowing into the Treasury, enough to cover the $2 trillion price tag on the infrastructure bill in twelve years. Take corporate taxes back to 1950s rates — not exactly a time when the capitalist class was suffering — and you could pay the entire infrastructure tab in five years.

And these profit figures are based on what companies report to the IRS, adjusted by the Bureau of Economic Analysis to compensate for the more egregious tax breaks. It doesn’t account for all the trillions stashed in offshore tax havens.

They’ve got the money. They just don’t want to share.