Ireland goes to the polls on February 8 following the collapse of a minority government which has ruled since 2016. Prior to the recession, Irish elections were predictable contests. Whatever the result, the government would be led by one of two center-right parties in what was historically a two-way contest. The Left has never won an election in Ireland or even come close.

The center-right’s hegemony goes back to the Irish Civil War. While in most other European countries industrialization created the basis for left-right electoral competition, it was the civil war that created the modern divide in Ireland. The winners of that conflict became Fine Gael, the losers became Fianna Fáil. These two parties have monopolized government formation ever since.

Ironically, it was the losing side in the civil war that became the dominant party in the twentieth century. Fianna Fáil offered a mixture of social conservatism, economic pragmatism, and industrial corporatism. Many analysts defined the party as a proxy for social democracy in Ireland. They won majorities among the working class, the middle strata, and the farming class. Such was their ability to maintain this alliance that ever since the first-entered government in 1932, they ruled nearly 80 percent of the period until 2007. Irish politics was dominated and defined by Fianna Fáil in a way that defied conventional ideological metrics.

Historically, the Labour Party constituted the Left. Its support averaged between 10 and 12 percent. Much has been written about the weakness of the Labour Party and the Left since the 1930s: an agricultural-based economy with a small industrial sector, a politically strong Catholic Church, a conservative nationalist culture, a conformist electorate, and so on. None of these explanations are fully satisfactory; many European countries faced similar barriers at the beginning of the twentieth century.

The Labour Party did little to challenge these conditions. They periodically enjoyed office but as a minority party, usually with Fine Gael. But these arrangements were never ideologically coherent. Labour inevitably suffered in the following elections.

So Irish politics was fairly straightforward. It was either a Fianna Fáil government or a Fine Gael–Labour coalition. Commentators referred to the Irish “two-and-a-half party system” — with the two center-right parties being the full parties and Labour the half.

This, however, changed with the banking crisis and recession. It is still changing. And there is no guarantee that the center-right can maintain its monopoly over government formation in the medium term.

In 2008 the Irish economy entered a deep recession, caused by the collapse of a credit-fueled property boom and the subsequent banking crisis. Fianna Fáil was in office, with a small Green presence, having won the election in the preceding year (they hadn’t lost an election since 1982). Fianna Fáil was faced with a stark choice — side with finance capital and impose the costs of the crisis on to its loyal working-class base, or stay loyal to that base and force financial creditors to pay for the crisis. They chose the former.

By 2010, after two years of extreme austerity measures, Ireland was effectively ejected from the international bond market. In one of their last acts in office, Fianna Fáil invited the Troika (the IMF, the EU, and the ECB) in, and the country fell into a bailout program.

In the election in early 2011, Fianna Fáil suffered an unprecedented collapse, losing fifty-one out of seventy-one seats. The Labour Party won its highest number of seats ever and was set to become the main parliamentary opposition, the first time in modern electoral history. From this position they were primed to mobilize the trade union movement and civil society groups, deepening alliances and attracting increased support — especially as the new minority Fine Gael–led government would be in a precarious position.

However, in what could be described as a mistake of historic proportions, Labour entered coalition with Fine Gael. Believing they could temper the Troika program and Fine Gael’s austerity instincts, Labour instead ended up implementing highly unpopular measures that cut public services, social protection, and investment. This led to major demonstrations around the country over the government’s botched attempt to introduce highly unpopular water charges.

In the 2016 general election, Fine Gael declined significantly, but it was Labour that bore the brunt of public anger. They lost thirty out of thirty-seven seats. Though other left and progressive parties made gains, it was Fianna Fáil that made a remarkable comeback, doubling its parliamentary presence and nearly becoming the largest party in the state. The subsequent government saw a new type of arrangement — a confidence-and-supply agreement whereby Fianna Fáil, the main opposition, effectively kept a Fine Gael minority government in office.

Another new feature in Irish politics was the proliferation and fragmentation of broad left and progressive parties. For decades, Labour was the dominant, sometimes the only, party of the Left.

Now there were seven parties represented in the Irish parliament, the Dáil. These parties can be grouped around four broad trends in progressive politics: Sinn Féin represented the nationalist left; Labour and the Social Democrats were (unsurprisingly) the social democrats; People Before Profit, Solidarity, and the Independents 4 Change represented the radical left; and then the Greens, who represented the ecologists. 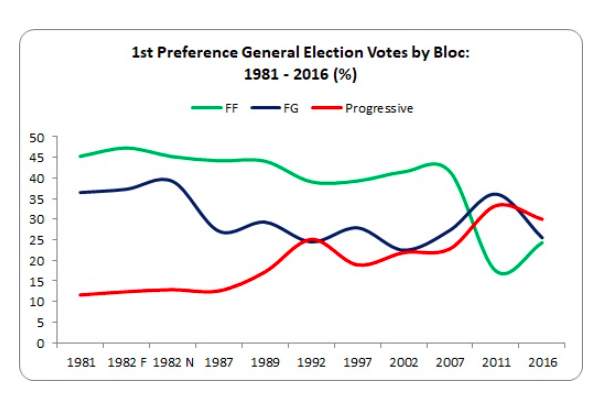 In 2016 this group together polled over 30 percent of the vote. However, it was far from cohesive. In essence, it was not conscious of itself as an emerging bloc ready to rival the center-right parties. Nonetheless, this bloc was experiencing a long-term trend, much of which occurred below the public radar due to the hold that the conservative consensus had on how Irish politics was interpreted.

Since the 1980s support for progressive or nonconservative parties nearly trebled. By 2016, Fianna Fáil, Fine Gael, and the progressive bloc were receiving similar support. Irish politics has been slowly trying to break out of the historical two-way contest into a three-way one.

While the Irish economy has rebounded strongly from the recession, the legacy of austerity still drives the debate. There is a housing crisis — with prices and rents rising to unaffordable levels for most people, coupled with a rapid rise in homelessness (in particular, child homelessness). There is a health crisis — with lengthy waiting times in A&E and for life-saving procedures. There is increasing precariousness in the workplace, spreading out beyond its usual low-paid sectors. And the increase in the pension age, a decision taken under the Troika program, has also become an issue as people reject the idea that they must continue working until they receive their pension.

Most of all, there is a real sense that for so many the recovery has passed them by, that many are still finding it difficult to make ends meet despite all the headline data. All of these issues have, to some degree or another, featured in the public debate. However, there was no expectation that the election would be anything other than a two-way contest between the center-right parties.

But halfway through the campaign, things are looking very different. 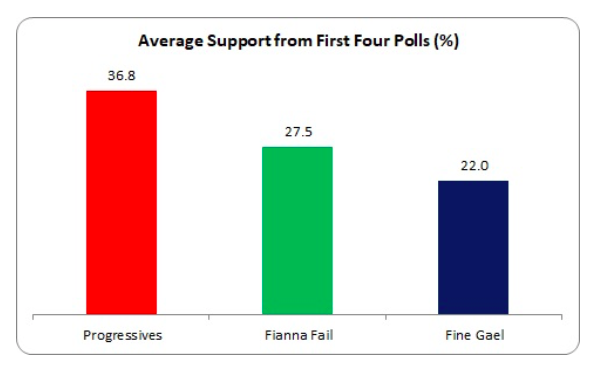 The governing party, Fine Gael, has seen their support decline while Fianna Fáil struggles to build on their 2016 success. The real surprise is the support for the progressive bloc — the parties that make up the four strands of progressive politics. In particular, the surge in Sinn Féin support to 20 percent has surprised many, given their poor European and local elections last year.

If the parties that make up the progressive bloc were campaigning in even a loose alliance, the debate would be turning to the prospect of a left-led government. There is a clear commonality in their manifestos: a substantial construction program for public housing; health sector reform (termed “Slaintecare”) that would slowly remove private health care from the public facilities; stronger labor rights; variations of a sizable Green New Deal; and a more egalitarian program of tax reform and social protection supports.

Unfortunately, the fragmentation has meant that a third alternative has not featured in the debate (so far) and the prospect of a governing bloc not led by one of the two conservative parties has not yet become viable. But what is clear is that support for the conservative parties is continuing its historical decline as a sizable and growing number of people seek out alternatives.

While it is too early to speculate on postelection coalition maneuverings, the conservative parties have ruled out any negotiations with Sinn Féin. They base this refusal on claims that Sinn Féin is not a normal democratic party — specifically, that it is still ruled by the old IRA command. However, many see this as hypocritical, given that the same conservative parties constantly demand that Sinn Féin enter coalition in Northern Ireland. This has fueled sympathy for the party, with a greater willingness to listen to their program and policies.

At this stage it is looking like a repeat of the current government arrangement — a confidence-and-supply agreement between Fianna Fáil and Fine Gael, with the former heading the government this time. However, with support for the two parties falling, there is a real question about whether smaller progressive parties like the Greens, Labour, or Social Democrats would participate in a minority coalition government. Such government participation has not been kind to these parties; in 2011, the Greens — after having participated in government for the first time — lost all of their parliamentary seats.

However, there is an alternative to outcomes like that. We could be on the verge of a major structural realignment in Irish politics. This election is likely to see the progressive vote increase, led by Sinn Féin and the Greens. Such a breakthrough — whereby Irish politics takes on a more left-right competitive alignment — has been a long time coming. It may not happen in this election, and much will depend on the placement of the progressive parties after the votes have been cast.

But Irish politics is still in a transitional phase. It is a transition fueled by the recession and years of austerity. More and more people are rejecting the conservative consensus and opting for progressive alternatives. The challenge for those parties is to read the trends, listen to people, and act accordingly. If not in this election, certainly by the next they could be able to present an alternative: Ireland’s first left-led government, breaking a mold that was formed nearly one hundred years ago.