The Institute for Fiscal Studies (IFS) were straight out of the trap after Labour’s manifesto launch, providing what it touts as objective analysis of the figures, and will be following up with more detailed analysis soon.

In widely-reported comments, IFS director Paul Johnson claimed that Labour would impose “punitive” taxes on big business, and that Labour’s claims for the revenue raised from tax were “simply not credible.” Coming from an organization with a reputation for studied neutrality, the IFS’s assessment, and particularly Johnson’s quotable remarks, have been treated as something akin to the voice of God by much of the media.

But the IFS’s claims do not stack up to scrutiny. Worse, the organisation is trading off its reputation as an authority on some economic issues to make claims over other areas for which it has no expertise or authority. And for its director to use the language he did is to shift the institution into a nakedly and obviously partisan role.

First, that Labour’s spending increases are, in Paul Johnson’s words, “vast numbers, enormous, colossal, in the context of anything we’ve seen in the last — ever, really.”

Second, that the tax revenues Labour claimed to raise would not be sufficient to pay for these spending increases.

Third, that the tax rises earmarked for corporations were both excessive and would in fact be paid by workers and consumers.

These three claims do not stand up well to scrutiny.

First, the IFS insists on making a claim that Labour is proposing a peculiarly high level of government spending. This is categorically untrue. Britain has an unusually low-spending government by developed economy standards, and austerity has simply reinforced this problem. This has been the case for decades in Britain, but the relevant comparison for spending decisions today is not how much was being spent many decades ago when the economy was very different.

The relevant comparison today is to other, similar economies today. Looking across the world at economies similar to Britain’s shows that Labour’s plans would increase its very low government spending today to about 44 percent of GDP, a level just above Germany but below the level of France, Austria, Belgium, the Netherlands, Denmark, Norway, Finland and Sweden. Another think tank, Resolution Foundation, made the point graphically clear: 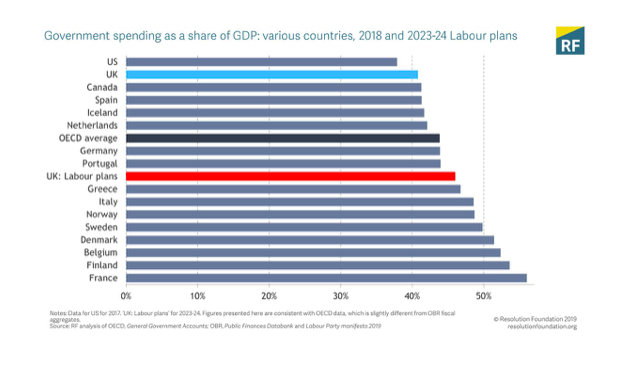 Similarly, the IFS’s claims about investment spending by government — that’s spending on infrastructure like public transport or energy systems, or buildings, or scientific research — have the same problem. They claim Labour plans to increase investment spending by £55 billion a year, double the current level. But Britain is a strikingly low-investment economy by comparison, again, with similar countries.

The government spends only 2.6 percent of GDP on investment, well below the 3.6 percent average of the OECD group of major developed economies. Labour’s plans would move this level of spending to about 4 percent of GDP, just above that OECD average.

There is nothing at all unusual or exceptional about where Labour plans to get to. What the manifesto lays out, in spending terms, would move this country to something more like a Danish or a Swedish model of government provision, and out of its freakishly low levels of public spending.

“Make Britain Normal Again” is not exactly a campaign slogan, but it’s what Labour sets out. What’s dramatic is the change in direction – that instead of forty years of moving, sometimes quickly, sometimes at a dawdle, towards a dystopian neoliberal hell-world, Labour’s manifesto would turn our society 180 degrees round and set us off towards Scandinavia.

Second, the IFS admits that “in the short run” the corporation tax rises would be likely to bring in the amounts Labour has claimed. IFS’s own estimates suggest £16.5 billion a year has been lost through corporation tax cuts between 2010 and 2016. But they assume that in the long run these revenues will drop off, because higher corporation taxes, in their world, means lower rates of investment.

There is no evidence offered for this statement — it is pure, media-friendly neoliberal ideology. As we’ve seen, repeated cuts in the rate of corporation tax in Britain since 2010 have not stopped business investment (always low in the UK) staying below its pre-crash levels (as a share of GDP), and even falling in recent months. Even the Tories have now admitted as much: after years of claiming corporation tax cuts were somehow a net gain, Boris Johnson has announced that he will halt further cuts, thus apparently raising £6 billion.

But what the IFS asserts here — that corporation tax rises now will lead to lower tax revenues in the future — is worse than that. It’s the kind of claim about the world that could be tested with evidence: you can either look at the evidence for corporation taxes elsewhere, or you can conduct a modelling exercise — putting your changes to taxes into a model of the whole economy, rather than trying to look at just a single part of it.

You need to model the whole economy when considering Labour’s manifesto (or anyone else’s) because even if the IFS were right (and they are not), and corporation tax rises did affect overall investment, the fact that Labour in government were planning to invest so much would drive overall investment right back up again.

And because in reality the government would be investing so much, it would induce businesses to invest more over the long term, since they would want to make use of faster broadband, better railway connections, and so on.

For increases in demand, this is what economists refer to as the “multiplier effect”: the ripples throughout the economy caused by an increase in government spending — especially government investment spending — can be far larger than the original injection of extra cash. Even the International Monetary Fund has recently identified that this multiplier effect is likely to be particularly large in economies with relatively low levels of government debt, and low interest rates — exactly like the UK’s.

This multiplier effect particularly marks the difference between microeconomics and macroeconomics. Microeconomics is the study of individual markets, and looking at the impact of government policy on specific markets. Macroeconomics attempts to look at the whole economy, and assess all the interactions between the different parts of that economy.

But the IFS, in the words of Robert Chote, their director immediately prior to Paul Johnson, “do not do macroeconomic forecasting.” They do not do the kind of large-scale modelling exercises that might, perhaps, lend some credibility to the claims being made about Labour’s tax plans. The IFS have a solid reputation for research microeconomics. Their elections output attempts to leverage this into commentary on macroeconomic policy, an area where their expertise is strikingly more limited.

Third, the IFS claims that even if some revenue could be obtained from increasing taxes on businesses, those tax revenues wouldn’t be coming from business — but in fact from workers, consumers, and shareholders. The specific issue at stake is what economists call the “incidence” of a tax. The government may say that a tax will be paid by a certain group of people or institutions — big corporations, say. But because that group can change its behavior in response to the tax, someone else may end up actually paying for it.

So, if (say) the government whacks a tax on the producers of boiled sweets, the manufacturers might be able to push up their prices and make sweet-toothed consumers pay for it. In the case of corporation tax, instead of companies paying their tax increases out of profits — currently at record levels in the UK — they would cut or freeze pay for their workers, increase prices for consumers, or squeeze dividends for shareholders. They might not be able to do this – trade unions might block pay cuts, or, more likely, competitive markets for what companies are selling make price rises more difficult.

This is, once again, an empirical question — one to be settled by looking at the evidence. And the evidence, once again, is not favorable to the IFS’s claims. Recent research found that there is “no robust evidence that corporate tax burdens have large depressing effects on wages.” The Institute of Public Policy Research (IPPR) looked at the available evidence and found that in larger, developed economies, far less of any corporation tax rises are passed on to workers or consumers than elsewhere and that, overall, there is no clear evidence of impact on wages or consumer prices either way.

For shareholders, there is some empirical evidence of an impact: but here it is worth noting, despite assumptions otherwise, that years of neoliberalism have left most shares in UK companies not actually owned by anyone in the UK. Official figures show that 54 percent of UK listed shares are owned overseas; 12 percent are owned by individuals; and a tiny 3 percent are held by pension funds. At most, the IFS could have flagged the issue of incidence of corporation tax, and noted the empirical uncertainty about it; instead, the claims they’ve made – that all or most business tax rises are passed on — stretch significantly beyond the point they can reasonably be supported.

To be clear, the IFS has a well-deserved reputation for its microeconomic research. And party manifestos — and the economic statements they make — should obviously be subject to rigorous scrutiny. But that would mean using tools appropriate to the task, and avoiding claims that cannot be supported — especially where those claims will be treated as authoritative or “objective.”

The underlying problem, as both Paul Mason and John Weeks have pointed out, is ideology: not in the sense of some evil plot — this isn’t how ideology works — but of a common worldview, shared between the Institute for Fiscal Studies and many of the journalists who report on it. This is the ideology of neoliberalism, and it’s embedded into the IFS’s approach: fixating on the microeconomics and ignoring the macroeconomics tends to relegate the role of government to an unproductive leech on the economy, at best.

Yet as the work of Marianna Mazzucato and others have shown, government spending itself can have a productive impact on the economy — in research and innovation, most notably. That neoliberal ideology is present in the IFS’s choice of language, too, as John Weeks notes: calling government spending a “giveaway” underlines the belief that what governments is doing is dispensing freebies, rather than actively shaping economic outcomes.

That embodies a particular view of the world. Clearly there are other, different and arguably better ways to think about the economy, but the IFS is nonetheless regarded as beyond reasonable question — even when its director uses clearly partisan language.

What’s needed to improve the situation, more than anything else, is something that neoliberals should, ironically, welcome: the cold winds of competition in economic analysis, with different institutions supplying different takes on the party manifestos, and multiple experts called to give their views on economic events. Time, perhaps, for a People’s IFS.