Goldman Sachs is at the heart of American capitalism, at the pinnacle of Wall Street. Its former executives frequently hold key posts in government, and presidential candidates scramble to secure its donations and give well-paid speeches at its meetings. So when the investment bank’s economists start questioning the “efficacy of capitalism,” many people take note.

The fretting about capitalism appears in a recent analysis on the US economy’s profit levels, which are at near-record highs. 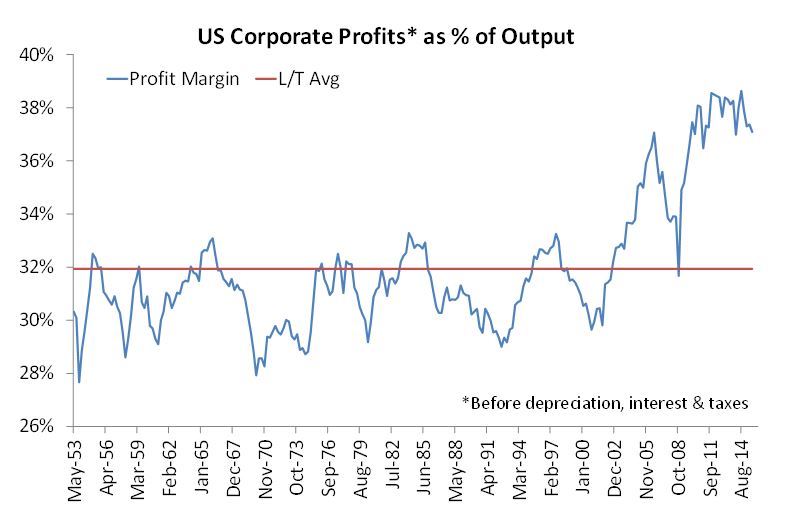 According to GS, the margins — the amount of profit in each unit of national output after the unit cost of labor and raw materials is removed — are sky high for both good and bad reasons. In the first category, they list improved efficiency from new technology and rising profits from overseas investment (as US companies produce more things using cheap labor in so-called emerging markets).

They view “financial engineering” less positively. Rather than investing in new technology, corporations have increasingly borrowed money at cheap rates and bought back their own shares to raise their stock price. They have also boosted their speculation in financial securities because the returns on stocks or bonds have exceeded those for investing in new plants or offices or projects. Purchasing another company to suck up profits has proved much more lucrative than greenfield investment.

But, the GS economists maintain, the efficiency of capitalist markets will limit this profit bonanza. Under mainstream economics’ law of diminishing returns, or “marginalism,” the more you have of something now the less you will get in the future. So the high profit margins should gradually decline and profit margins should revert to some mean average as new competitors enter the market looking for windfall gains.

Think of it this way. If your neighbors sell their house for $300,000 and then next month another neighbor sells theirs for $400,000, others in the neighborhood might decide to put their homes on the market too. But if too many do so, and there aren’t enough buyers, house prices will fall — not rise. In this scenario, competition-driven supply and demand brings about a “reversion to the mean,” and housing prices reach an “efficient” equilibrium.

But what if profit margins don’t drop back down to the mean? What if they stay elevated?

This is what the Goldman analysts are worried about — that the persistent buoyancy of profit margins means the laws of the market are not working efficiently. Something is keeping profit margins artificially high: perhaps the monopoly power of financial institutions like Goldman Sachs or big companies like Google; or a rigged labor market that is depressing wages. And if it continues, already-extreme levels of wealth and income inequality would remain heightened — triggering basic questions about capitalism itself.

We are always wary of guiding for mean reversion. But, if we are wrong and high margins manage to endure for the next few years (particularly when global demand growth is below trend), there are broader questions to be asked about the efficacy of capitalism.

Indeed, there are. But are profit margins a useful indicator of what is going on in the capitalist sector of the US economy? And would everything be fine and dandy if margins reverted to the mean?

The authors seem to forget that the law of diminishing marginal returns is nothing of the sort. It’s not based on the reality of capitalism, but on a mainstream economics model that functions as an apologia for capitalist markets. It assumes that capitalism proceeds smoothly upward and when something gets way out of whack, through some “exogenous shock,” eventually it will come back into line. In short, it assumes there is a tendency toward equilibrium.

This view pervades all mainstream economics, both right-wing (neoclassical) and “liberal” (Keynesian). For example, as Paul Krugman, the Keynesian economics guru and Nobel economics prize winner, put it just this month on his blog:

Now, it’s true that the real economy isn’t characterized by competitive general equilibrium. But it’s still a useful baseline — not so much an idealization as a description of how things should be, which helps to cast how they really are into much sharper relief.

By focusing on profit margins, GS economists are really warning their customers that profit margins will likely fall as “market forces” kick in; stocks are therefore overvalued, and investors should sell. In other words, even with their qualms, they assume capitalism will prove itself “efficient.” And even if margins don’t drop, it’s a sign the system isn’t efficient as it should be — not that capitalism is failing.

The authors are able to reach such a conclusion because, as mainstream economists, they use a model of profit generation that misunderstands the source of profits. An additional analytical misstep is their concern with the profit margin rather than total profits or profits relative to the amount of capital advanced (profitability or the rate of profit).

The mainstream view of profit is that it is income from just one “factor of production” (capital). Wages come from a different factor (labor), and rent comes from another (land). The greater the quantity of a certain factor of production, the lower the return. So if there are lots of workers looking for work, wages will be lower (more workers employed will reduce the marginal increase in wages). Similarly, the more capitalists seeking a profitable return on investment, the less likely they will find it because of competition with other capitalists (the more capital employed, the less the marginal increase in profits).

But what if this theory is fundamentally flawed? What if it’s instead the case that profits are not a return on a factor of production but instead come from the exertion of human labor — that they’re the surplus appropriated by the owners of the means of production (factories, offices, etc.) over and above the wages paid to the workforce, who create the things and services that are sold on the market? This is the Marxist view. Marxists see profits as the unpaid labor of workers, not the earned income of capital.

Marxists also see no reason why the law of diminishing returns and reversion to the mean should be the norm under capitalism. On the contrary, the more the share of profit rises — i.e. the more capital exploits labor — the better off capitalism is (just not workers, of course). Why? Because capitalism isn’t a system geared toward producing the things and services people need; it’s a system designed to make money. Providing things and services is just a (necessary) byproduct.

So while Goldman obsesses over the profit margin, it is the level of profits and the amount of profits relative to the amount of capital invested — the average rate of profit — that matters, not the marginal profit on one unit of output.

Here’s where Marx’s law of profitability comes in. Marx argued that the value of the means of production relative to the value of wages (for the system as a whole) has a propensity to increase over time. This then tends to lower the rate of profit, which can only be boosted by increasing the rate of surplus value (or exploitation) — in other words, pushing workers to work harder and produce more.

But this push to intensify exploitation has physical and social limits: workers can’t toil for more than twenty-four hours a day, and labor laws set an additional ceiling. Eventually the rate of profit will start to fall, followed by total profits. And this generates regular and recurring slumps in investment and output.

These days the overall profitability of US capital is actually near its post-1945 lows. The US rate of profit has been falling (with brief periods of spikes) since the 1950s. There is no sign of a “reversion to mean.” Indeed, on my measure, the US rate of profit is now half what it was in the 1950s. 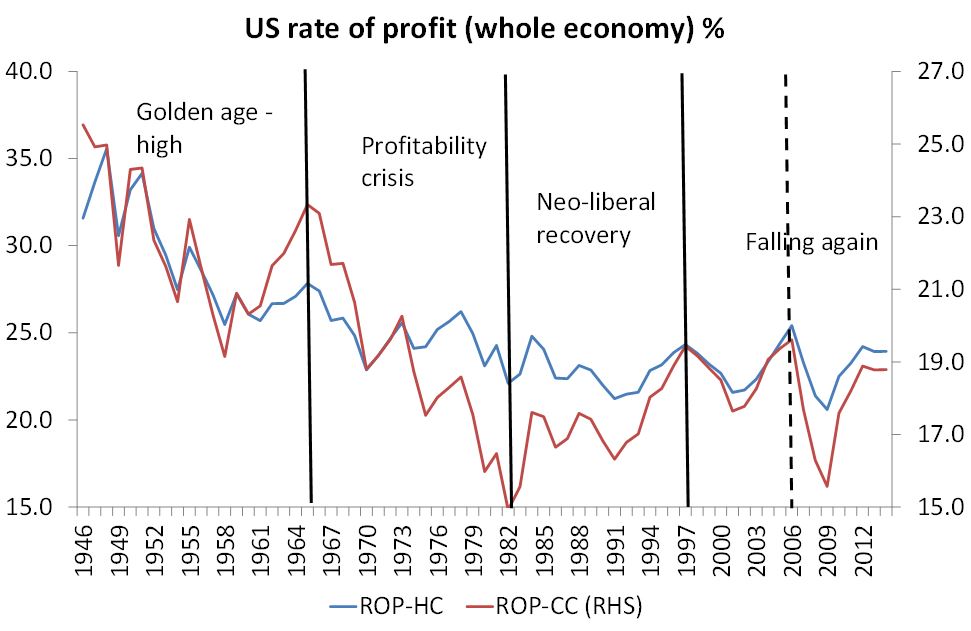 Obviously there are variations — profits differ drastically by industry — but the evidence for the Marxist view is strong if you look at the system as a whole. A drop-off in profits usually heralds a decline in business investment, which, if sustained, eventually leads to a new economic recession (a fall in output, employment, and income). Indeed, the movement in investment is initially driven by movements in profit — not vice versa.

Even Goldman’s economists admit as much. The company’s European economists recently found that “corporate profits are a decisive factor in determining the strength of corporate investment. Moreover, profit growth and investment spending seem to reinforce each other to some degree.”

In the period leading up to the Great Recession, total profits declined for several quarters before the US economy took a nose dive. From its peak in early 2006, the mass of profits plummeted until mid 2008, made a limited recovery in early 2009, and then dropped to a new low in mid 2009. Profits then began to recover, and in mid 2010 surpassed the previous high.

Today the level of US corporate profits is falling again. With the productivity growth inching along since the end of the Great Recession, the average rate of profit has seen an attendant drop. High profit margins are no longer enough to sustain the total level of profits. 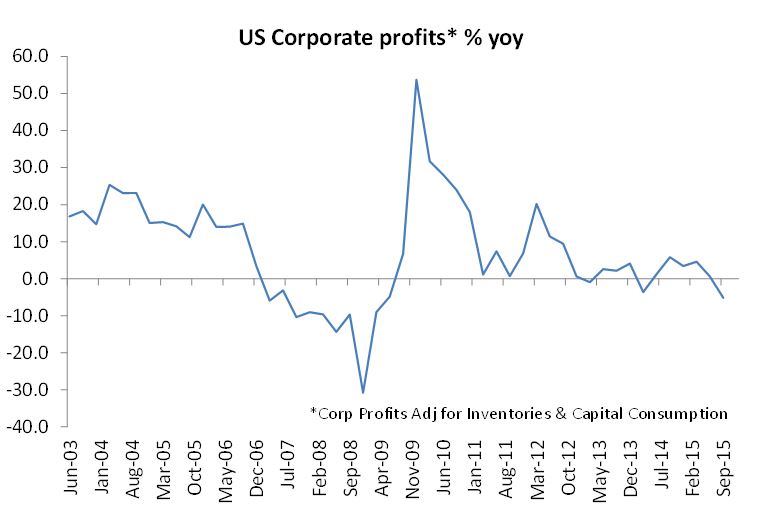 Even with near-zero productivity growth, wages are already so low that companies are having a difficult time squeezing more surplus value out of them.

For economists at JP Morgan, it all adds up to a grim picture: they recently projected US corporate profits will fall 10 percent this year, noting that when profits collapse, an economic recession is not far behind: “This week’s larger-than-expected productivity drop in 4Q15 points to a 10 percent drop in corporate profits from year-ago levels. A double-digit decline in profits is a rare event outside recessions, having been recorded only twice in the last half century.”

The report now puts the probability of a US economic recession in 2016 at 25 percent, up from 10 percent.

So what does all this mean?

Goldman Sachs’s declaration that falling profit margins are a measure of the “efficacy” of capitalism and that a return to “normal” is near rings hollow. High profit margins are masking a broader decline in corporate profitability as well as the depressing likelihood that an economic recession is once again on the horizon — only eight years after the American economy experienced its most severe slump since the 1930s.

And for the 99 percent, that is the real measure of capitalism’s efficiency.