Joe Biden has delivered the opposite of a peace dividend in 2022. Despite the US withdrawal from Afghanistan — and despite Biden’s vows to enact a sweeping domestic agenda — US military spending has increased and social spending has dropped compared to the last two years. Of the $4.1 trillion Biden proposed last year for climate, health, and other social spending over the next decade, less than one quarter has materialized so far — just $987 billion over ten years. Meanwhile, the Pentagon is on track to grab that amount in one year by the end of Biden’s term.

Rather than chart a new path after the massive military outlays of Donald Trump’s administration, Biden has followed his predecessor’s lead. The Trump-Biden military buildup is so dramatic it puts Ronald Reagan’s legendary spending spree in the 1980s — which retriggered the arms race between the US and Soviet Union — to shame. On average, annual military budgets in the Trump-Biden era have been $220 billion higher than under Reagan. 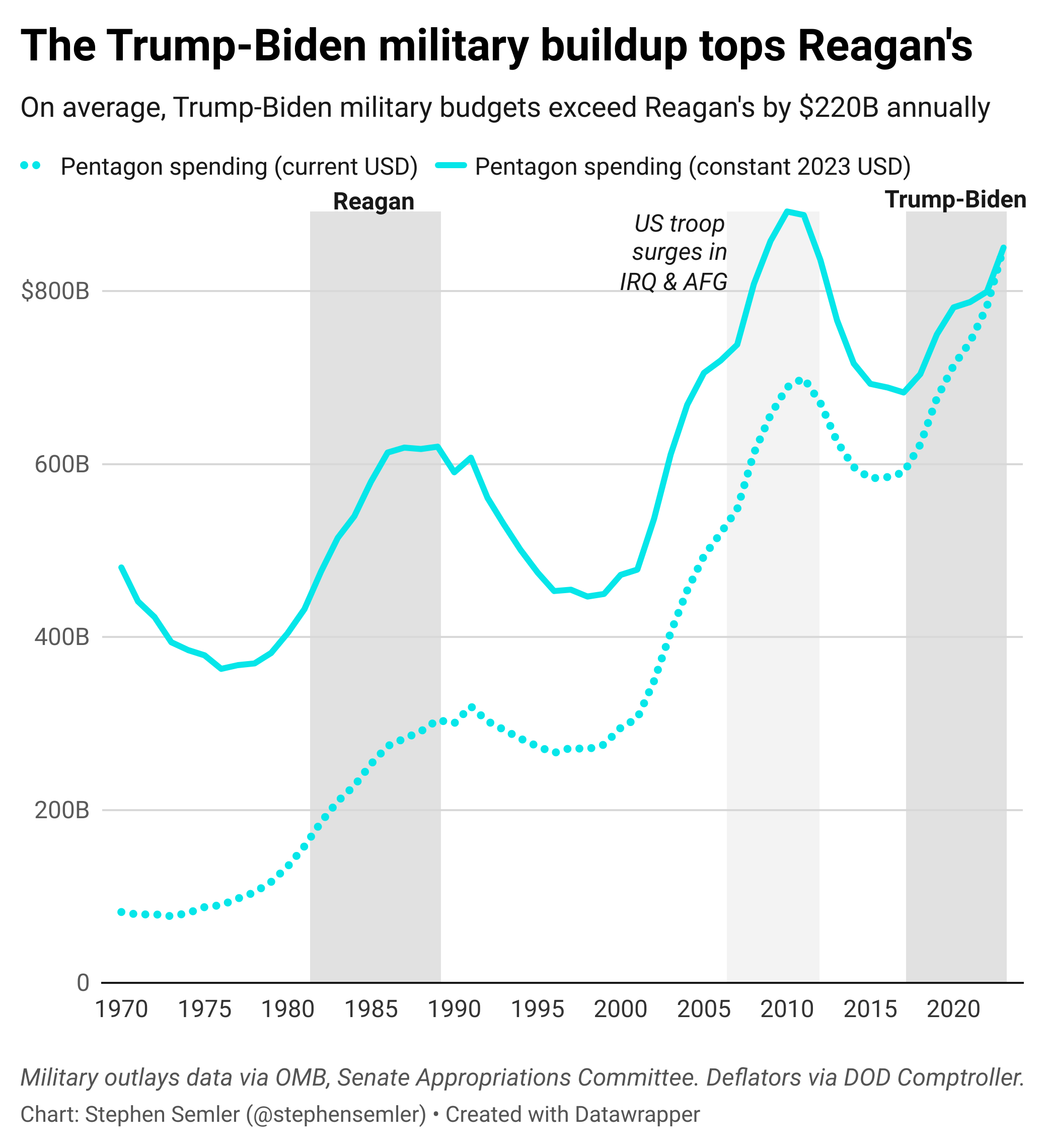 This makes for fertile ground for war profiteering. Pentagon spending props up an entire industry chock full of tens of thousands of private companies that provide goods and services to the military as contractors. Big military budgets stock these private contractors’ coffers full of cash, which the firms then reinvest into the political system to keep the largesse flowing. Every year, military contractors spend hundreds of millions of dollars on political contributions, lobbying expenses, and donations to prominent think tanks.

These investments have been devastatingly effective: despite resurgent austerity in the public sector and a clear need for a diplomacy-centric approach to foreign policy, Pentagon spending in fiscal year 2023 could end up being higher than at any point since World War II.

The military-industrial complex, in other words, is alive and well under Biden. And ordinary workers are suffering because of it.

Here, in six charts, is how the military-industrial complex siphons off money from pro-worker programs — and how it sustains its enormous political power.

Establishment politicians like to describe the Pentagon budget as an investment in the country’s security, but it’s better characterized as a massive redistribution of wealth.

Each year, more than half of the US military budget is transferred to the private sector through federal contracts. Of the $14.5 trillion the Pentagon spent between fiscal years 2002 and 2021, 55 percent went to military contractors. The portion of spending dedicated to contracts varied little during this period; contract values grew and shrank as overall budgets did. 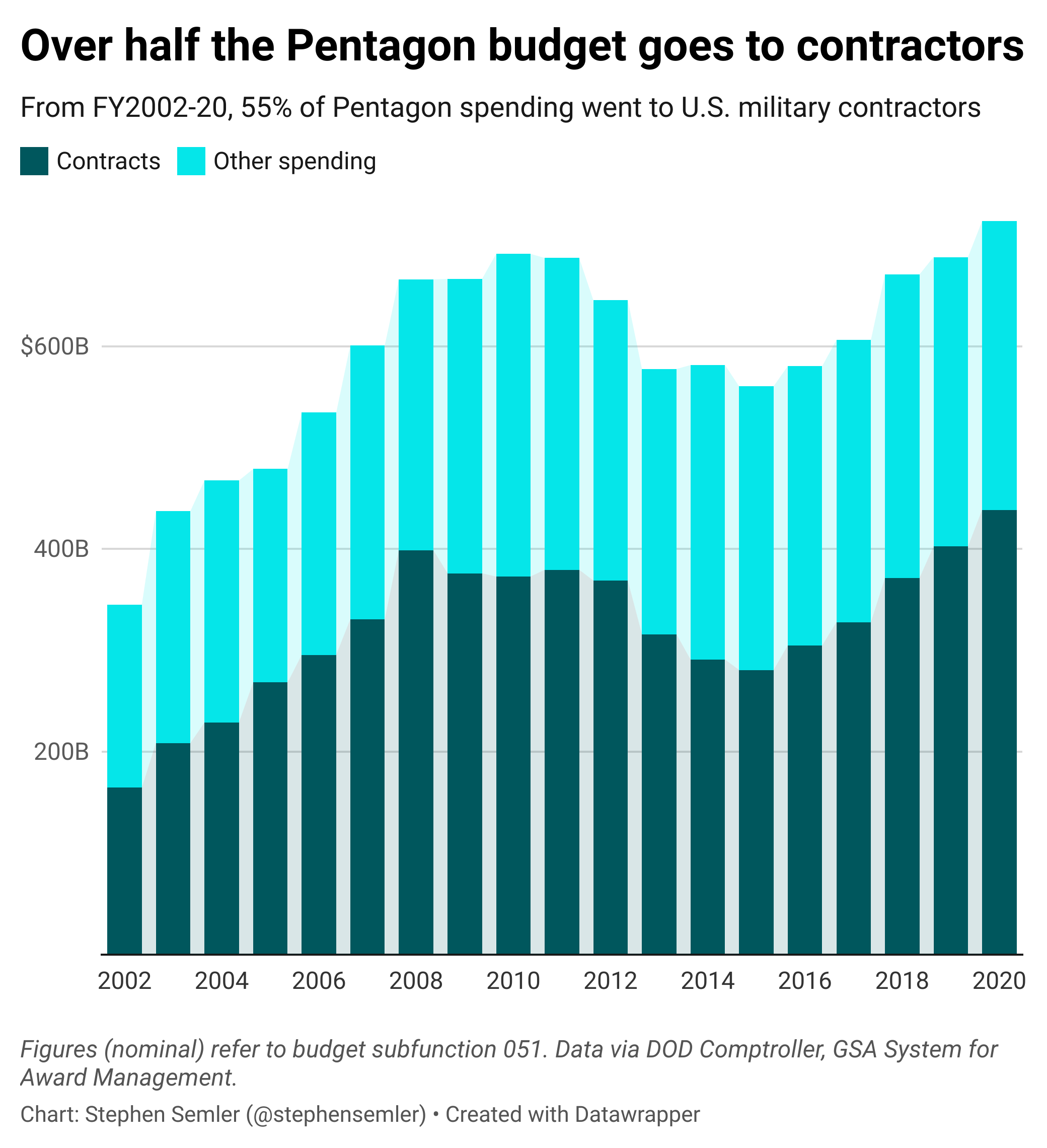 For many of these firms — particularly the largest ones — their profits largely depend on how much federal funding they receive. So it’s no surprise military contractors invest so much in manipulating the political system.

Contributions to federal candidates from the arms industry tripled from the 2002 to 2020 election cycles. All told, military contractors shelled out a whopping $283 million on candidates and political parties from 2001 to 2020.

Congress, with its power of the purse, was the predictable target for most of this flood of cash. And it seems to have paid off: Pentagon spending skyrocketed over the twenty-year stretch. 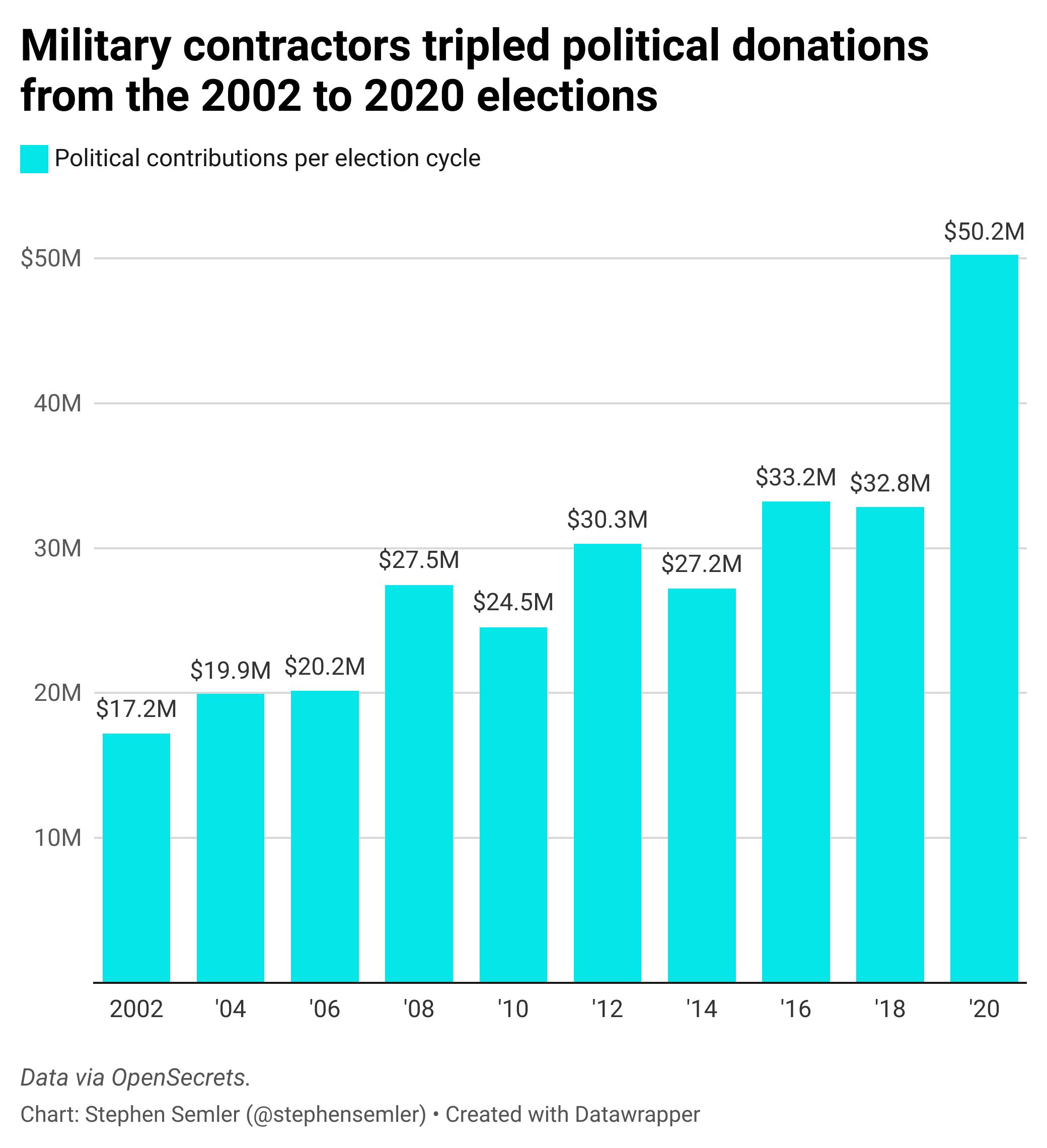 The members of Congress who rake in the most contractor cash typically sit on the armed services committees and appropriations subcommittees on defense, which have the most say over the military budget’s size and content. But contractors donate to most lawmakers and tend to split their checks more or less evenly between Democrat and Republican candidates.

Top congressional recipients of industry cash insist these donations don’t affect their decisions. However, House members who voted to boost military spending to $778 billion for FY2022 received three times more money from military contractors than members who opposed it. Likewise, senators who backed the hike took seven times more arms industry cash than those who cast “no” votes.

Unlike legislation for social programs, Congress often adds funding to military bills after the initial proposal. For example, Biden put forward a $753 billion military budget for fiscal year 2022, but the spending bill he received from Congress included $782 billion for the Pentagon. The fiscal year 2023 Pentagon budget is following a similar trajectory: Biden asked for $813 billion, but the House approved $850 billion.

Arms industry lobbyists are a big reason why this sort of thing happens so often. Once the president sends Congress a funding request, industry lobbyists swarm Capitol Hill. Among many other things, lobbyists translate military contractors’ broad, profit-driven interests into specific, actionable legislative requests for members of Congress to effect or support, like inserting, removing, or amending text in an authorization (policy) bill or adding or subtracting funds from a particular program in an appropriations (spending) bill. 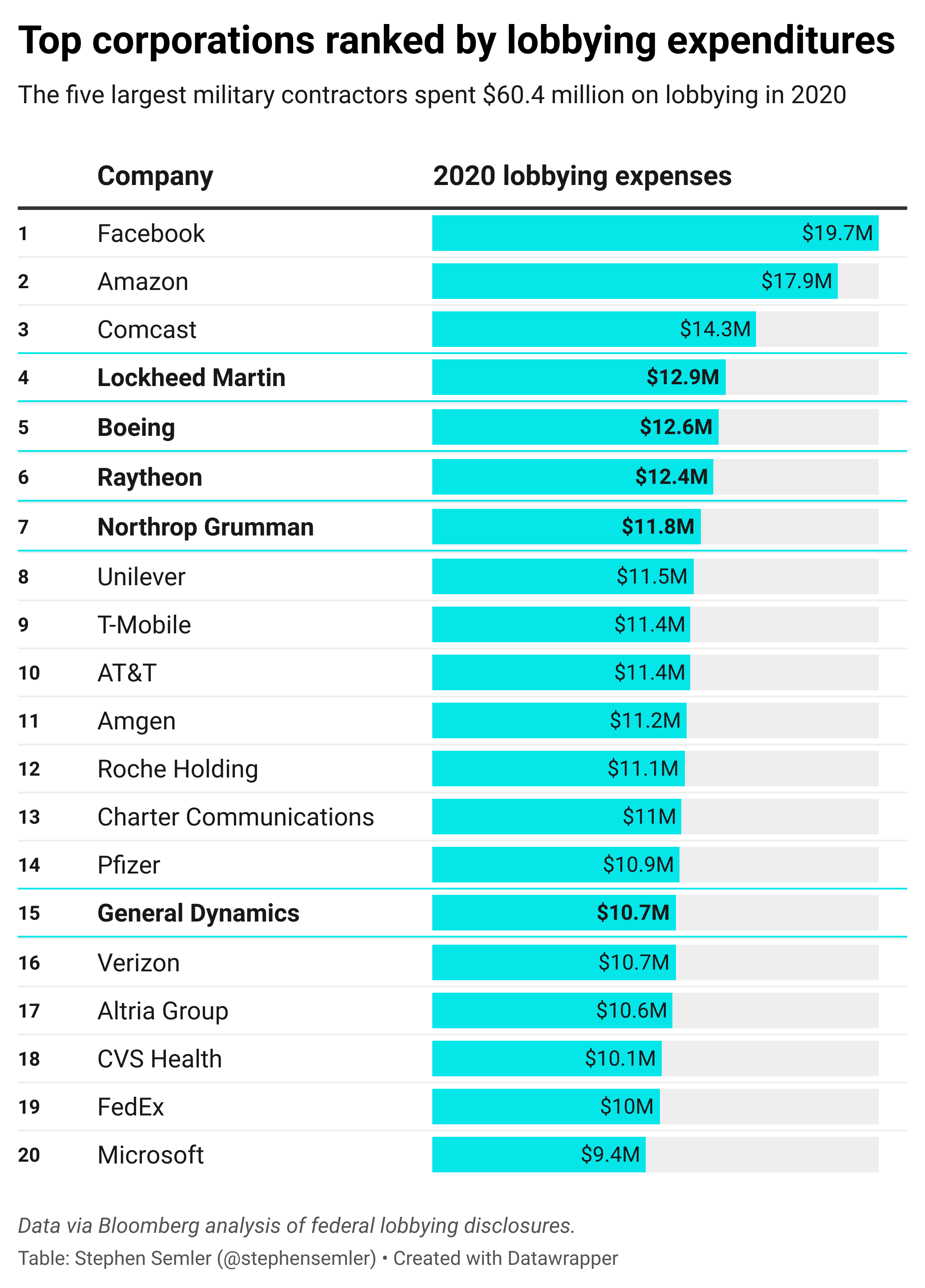 The payoff seems to be well worth the steep price. For example, during the Afghanistan War, the top five military contractors devoted over $1 billion to lobbying but collected over $2 trillion worth of federal contracts.

Theoretically, think tanks are supposed to shape government policies, untainted by the big money that biases in-house policy planning. The problem is, many of the most influential think tanks are corrupted by the same monied interests as Congress — including military contractors.

Most of the country’s major think tanks — from New America to the Brookings Institution to the Center for a New American Security — receive funding from military contractors. Underwriting think tanks allows the arms industry to launder their parochial, profit-driven interests through ostensibly impartial policy expertise. 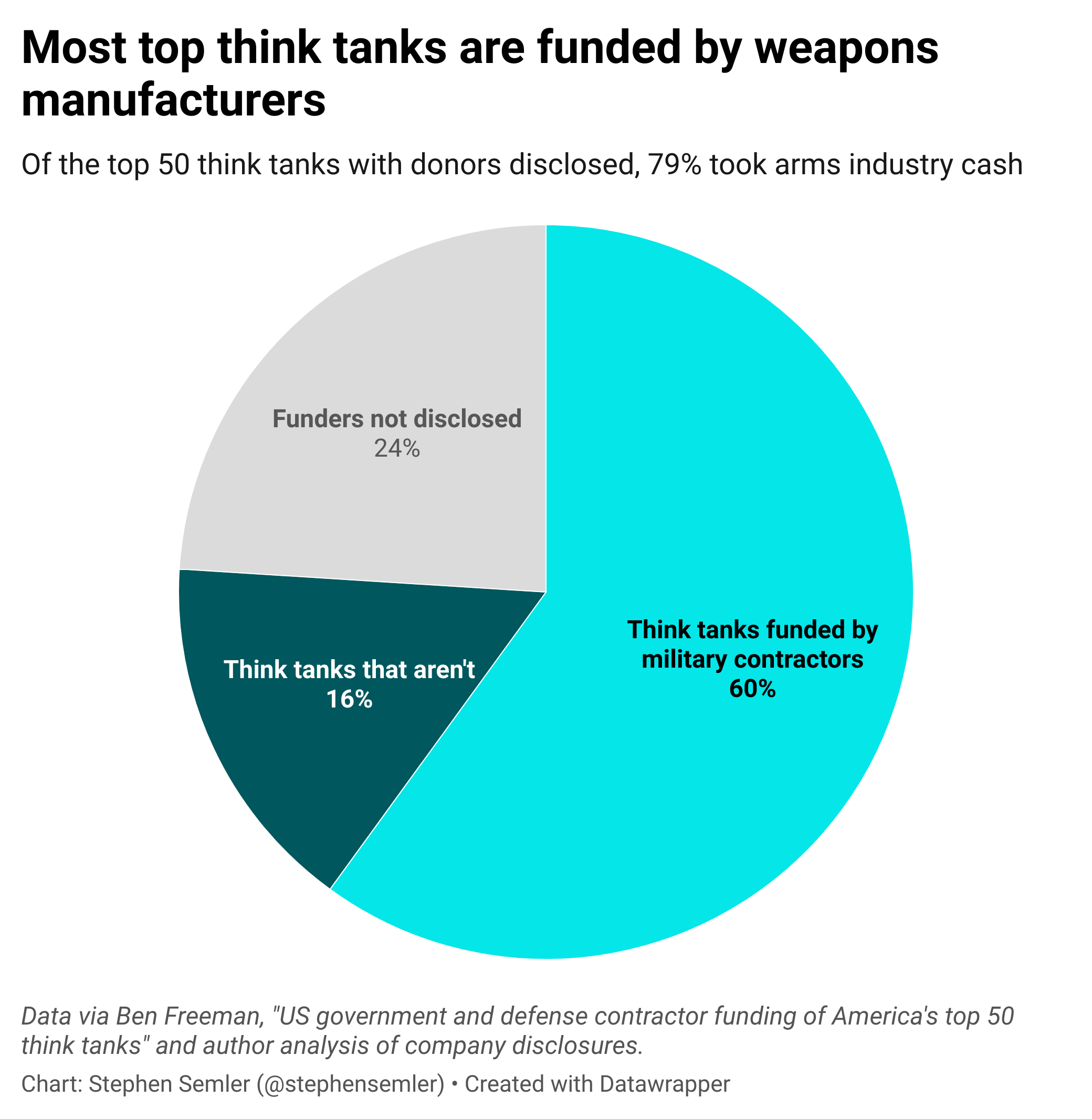 Sponsoring think tanks also helps police the bounds of the establishment consensus, elevating some ideas and keeping others firmly on the margins. Conservative outfits like the Heritage Foundation and liberal ones like the Center for American Progress might disagree on lots of things, but they both receive plenty of military contractor largesse. And they both share a pro-growth attitude toward Pentagon spending.

The military-industrial complex, among other things, is a massive federal jobs program. Between the Pentagon and private sector military contractors and subcontractors, the sector directly or indirectly employs nearly four million people. Annual Pentagon budgets not only exceed those of other federal agencies but the GDP of most countries. 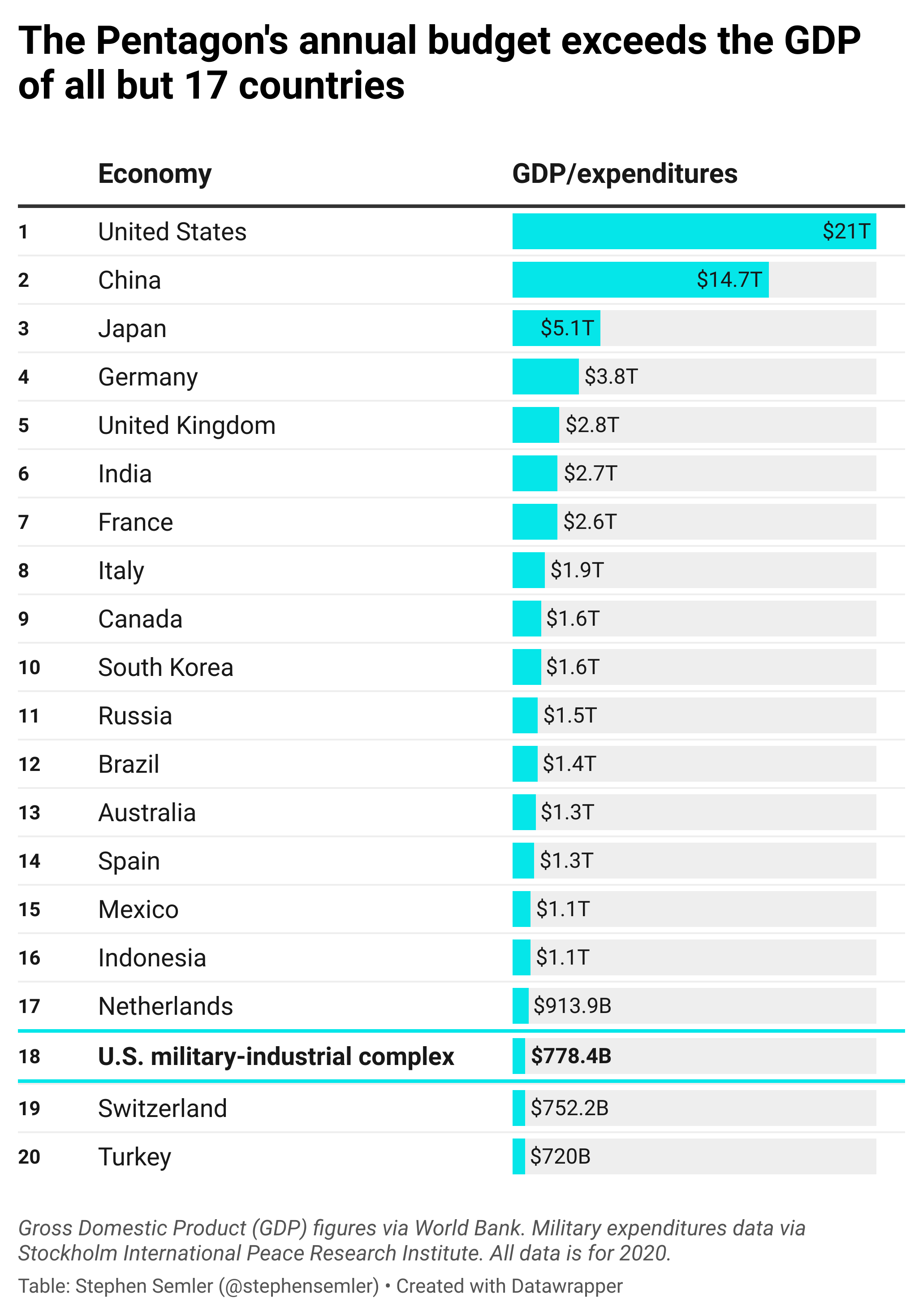 All of those jobs and benefits — carefully distributed across hundreds of congressional districts — make Pentagon spending an immediate, tangible, material concern for millions of people. In a country where the welfare state is notoriously threadbare and an actual federal jobs program is perpetually off the table, “military Keynesianism” comes to be seen as a more durable source of economic stability. Voters pressure elected officials to sustain or inflate the Pentagon budget to avoid job losses, forming something of a popular base for the military-industrial complex.

This dynamic, born out of economic precarity, has played an important role in cementing the decades-long Washington consensus on military spending — and incentivizing aggressive foreign policy positions.

6. What We’re Missing Out On

Military contractors’ natural allies are foreign policy hawks, because imperial policies must rest on top of big Pentagon budgets: the mountains of cash needed to sustain 750 overseas bases, the piles of money to underwrite counterterrorism operations in at least eighty-five countries, the endless funding to facilitate the “New Cold War” strategy that Biden adopted from Trump. This latter strategy promotes military competition with rival powers and prescribes a 3 to 5 percent increase in military spending every year — indefinitely — which Biden has more than obliged.

Perhaps Biden believes that the Cold War really was “the long peace” and is worth trying to recreate. It wasn’t, and it’s not: at least 20 million people died in the Cold War’s proxy conflicts, with about 70 percent of these deaths occurring in the Global South.

Nor is this “merchants of death” spending a windfall for workers in the United States. Every year, the Pentagon struggles to burn through its budget by year’s end, while programs to address nonmilitary threats like climate change and pandemics go underfunded.

But what about military Keynesianism? Don’t those jobs benefit some workers in the United States? Not quite. In terms of employment, prioritizing combat over climate and public health effectively amounts to a loss: spending $1 billion on the Pentagon supports 6,900 jobs. Investing the same sum would generate 9,800 jobs in clean energy and infrastructure or 14,300 jobs in health care. 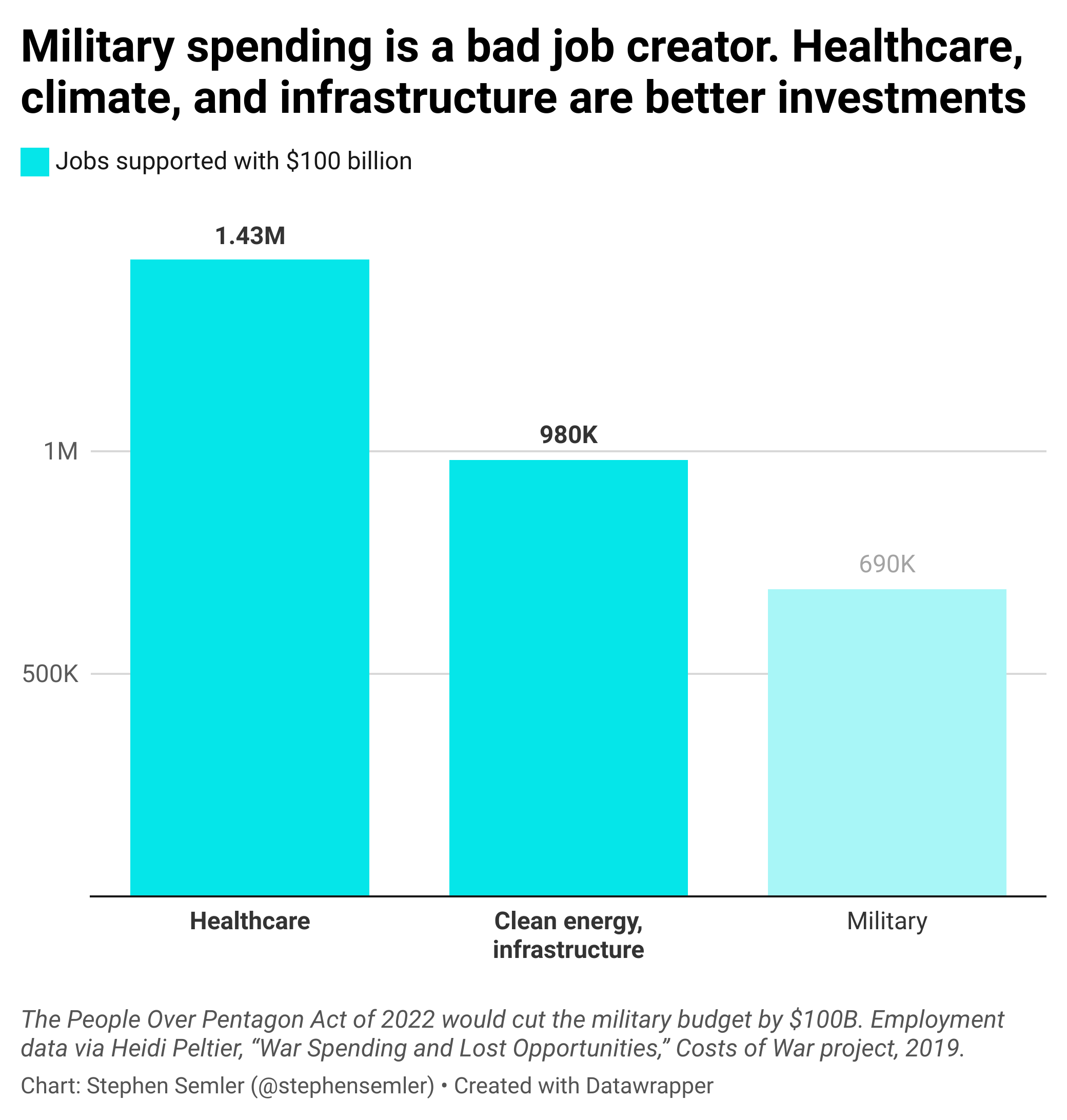 A federal jobs program of this kind, focused on social spending rather than military spending, would bring down skyrocketing inequality and provide direct material benefits to workers. Instead, for decades, the bipartisan political class has financed the worst kind of jobs program.