The Senate might vote on the fiscal year 2023 military budget this month. Or it might not; nobody’s sure. What’s for certain is that the bill the Senate considers will have at least as much as $850 billion for the Pentagon. In other words, we’re staring down a $72-billion year-to-year increase in military spending with this legislation: the FY 2022 version of the same bill (National Defense Authorization Act, or NDAA) licensed $778 billion for the Pentagon.

How We Got to an $850-Billion Pentagon Budget

In March, Joe Biden proposed increasing annual military spending by $35 billion — to $813 billion  —as part of his FY 2023 budget request. In June, the House Armed Services Committee (HASC) added another $37 billion on top of that before advancing the $850 billion bill to the House floor for approval.

This decision was reportedly a matter of course for the committee. According to one HASC member, there was “almost no debate” on dumping another $37 billion on top of Biden’s own proposed increase. An overlooked reason why the committee’s move was so automatic was the “expertise” that made a $72 billion year-to-year increase seem appropriate or even natural.

Think tanks are said to be free from the ugly forces that bias in-house policy planning — namely, all the lobbying and campaign cash that encourage members of Congress to make decisions based on parochial interests and not the public’s. The problem is that establishment think tanks are corrupted by the same monied interests members of Congress are. In this case, we’re talking about the arms industry.

Every think tank represented in a House Armed Services Committee hearing to provide expert testimony from January 1, 2020, through September 16, 2022, that disclosed its donors received funding from military contractors (the one that didn’t disclose its donors was the hawkish American Enterprise Institute, AEI).

The result? Military contractors were able to launder their profit-driven interests through ostensibly nonpolitical institutions, while powerful lawmakers on the HASC got their parochially driven policy positions validated by ostensibly unbiased “expertise.” 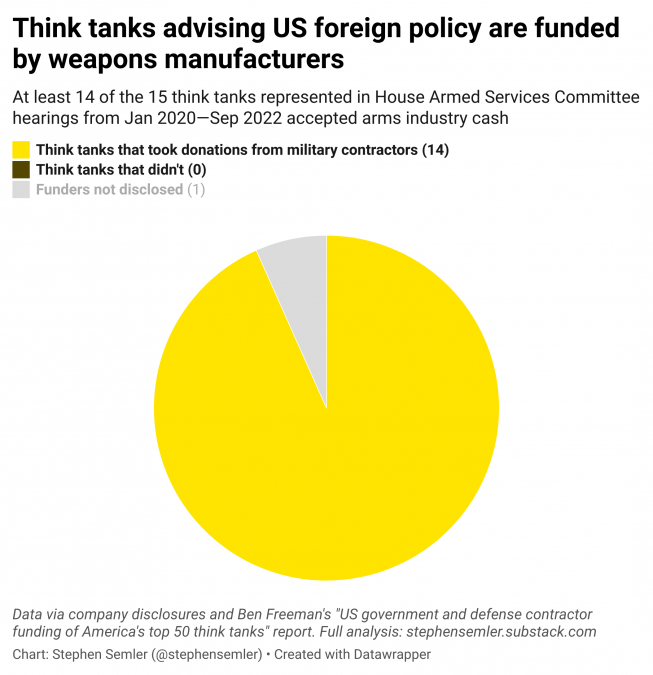 When I posted an earlier version of this piece on my Substack, I mentioned that AEI doesn’t disclose its donors. But Ben Freeman pointed out to me that after some digging, you’ll find that AEI has taken money from the military industry by way of its board chair — meaning that all the think tanks advising US foreign policy are taking money from weapons manufacturers one way or another, and the chart above should be a solid yellow pie.