As state lawmakers become ever less responsive to the needs of their constituents, citizen lawmaking via ballot initiatives is becoming an increasingly critical tool to counter minority rule and usher in progressive policies — from raising taxes on the wealthy to expanding public health insurance. As the August voter uprising that defeated the Kansas antiabortion measure makes clear, such direct-democracy efforts will likely prove especially important in protecting abortion rights following the end of Roe v. Wade.

GOP-led states, however, are now waging a three-pronged attack on citizen lawmaking: erecting barriers to keep citizen initiatives off the ballot, impeding these initiatives’ passage, and sabotaging their implementation. The Ballot Initiative Strategy Center (BISC) discovered a fivefold increase since 2017 in bills that aim to threaten the ballot process. While some of the most egregious proposed restrictions can’t pass without voter approval, many recently passed laws have made it far more difficult for citizens to use the initiative process.

“There’s a clear connection between progressive ballot victories and attacks on the initiative process,” said Corrine Rivera Fowler, legal advocacy director for the BISC, which identified 146 bills introduced in state legislatures in 2021 to worsen the ballot measure process. “These state bills intend to impede and even take away our use of the ballot measure for liberation.”

Such attacks are not just antidemocratic, but dangerous. Beyond the obvious harm to democracy, attempts to undermine citizen lawmaking increase the threat of social upheaval.  The January 6 insurrection demonstrated the response of thousands of people who were wrongly convinced their votes had been canceled. Real disenfranchisement could provoke additional angry backlash.

Last month, Republicans on Michigan’s Board of State Canvassers denied a ballot spot for an abortion rights initiative that garnered a record 735,000 petition signatures. They claimed inadequate word spacing in the petition fine print left people unaware of what they were signing. The same officials used another technicality to disqualify a new voting rights initiative.

It took a ruling from the Michigan Supreme Court to place the questions on the November ballot. The justices determined the board had no authority to deny citizens a vote on the two measures. In an election filled with high-impact initiatives, Michigan residents now join those in Kentucky, California, and Vermont in voting on ballot questions that will revoke or secure abortion rights.

More pro-choice measures seeking to overrule antiabortion lawmakers will surely follow, as eleven of the states that allow citizen initiatives now have laws restricting or banning abortions (some are in litigation).

Citizens in twenty-four states enjoy the ability to make laws via initiative, which involves collecting a requisite number of signatures (and meeting other conditions) in order to place a binding proposition on the ballot. Initiatives may enact or repeal statutes or, in some states, amend the state constitution. Every state, meanwhile, enables legislative referendums, in which the legislature may place a question on the ballot for citizens to decide.

Direct democracy was used in the Thirteen Colonies and was common in New England town meetings, but state initiatives first appeared when South Dakota citizens brought initiatives to life in 1898 as a way for citizens to counter the corruption of state legislatures by mining, railroad, and timber interests. Oregon, Montana, and other mostly Western states soon followed. Along with the twenty-four states enabling direct citizen lawmaking, twenty-three overlapping states offer a veto referendum process that allows voter initiatives to overturn state laws passed by the legislature. 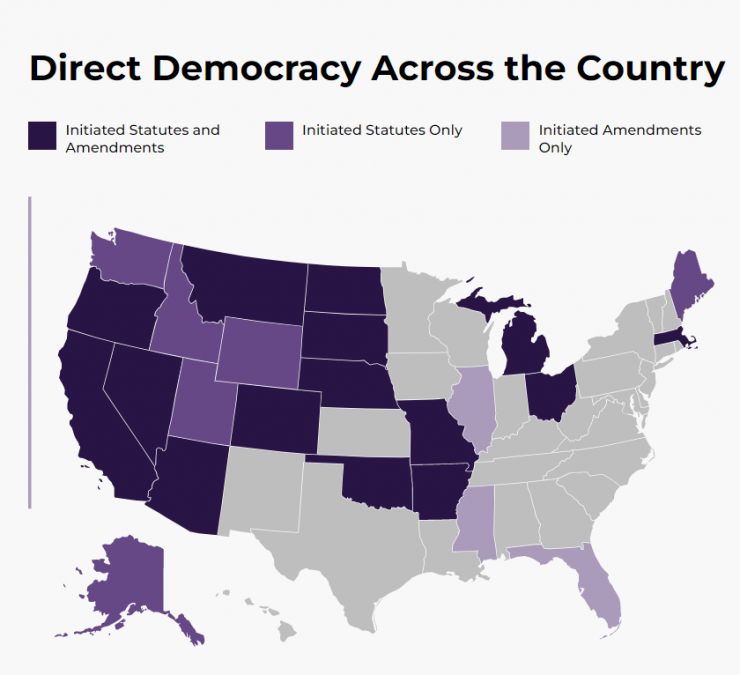 Republican officials are now taking aim at such processes, likely because they have discovered that many red state voters aren’t as reliable in their voting habits as they might have assumed. That phenomenon became national news in August, when Kansas voters turned out in record numbers during the state’s primary elections to defeat an antiabortion referendum, the first ballot question on the issue since the Supreme Court overturned Roe v. Wade and invalidated federal protections for abortion rights.

While that outcome stunned many observers, Kansas is no outlier. Utah voters, for example, have granted Republicans unbroken control of the state House, Senate, and governor’s office since 1992. Yet those same voters have decisively favored initiatives to expand Medicaid, legalize medical marijuana, and implement nonpartisan redistricting to thwart gerrymandering, the process of deliberately drawing election district boundaries to favor a particular political party. All of these ballot questions passed in 2018, after elected officials failed to address citizen concerns.

These rebukes are why many GOP lawmakers are now working to add onerous and costly demands to citizen lawmaking initiatives, with the goal of deterring citizen groups with limited resources from even attempting a ballot campaign to begin with.

In Utah, for example, an out-of-state group with anonymous funding called the Foundation for Government Accountability helped pass a 2021 law banning paying signature gatherers per valid signature, which is currently a standard practice. By nixing a key incentive for workers to gather more signatures than they would if paid strictly by the hour, the law will hike both the cost and duration of campaigns to qualify a ballot measure.

The Foundation for Government Accountability has been funded by the dark money network led by antiabortion operative Leonard Leo, who’s best known for helping build the conservative supermajority on the Supreme Court that overturned Roe. Leo’s network donated $2 million in 2020 to the Foundation for Government Accountability and $840,000 to its advocacy arm, FGA Action.

In Arkansas, meanwhile, the state supreme court ordered initiatives seeking to establish ranked-choice voting and an independent redistricting process — both nonpartisan, pro-democracy measures — to be removed from the 2020 ballot after they’d qualified. According to the court, the initiative violated a 2015 Arkansas law requiring signature gatherers to pass both federal and state background checks via state law enforcement — an impossible mandate, since the state lacks the authority to conduct federal background checks.

That background check law was overturned in court last year, but Arkansas lawmakers replaced the requirement with a slew of new barriers, from banning paid signature gatherers to barring anyone previously convicted of minor offenses from collecting signatures.

Mississippi’s legislature refused to revise a provision in the state constitution requiring that petition signatures be evenly distributed across all five of the state’s congressional districts. That became impossible after the 1990 census reduced the state to four congressional seats. Nevertheless, that language was used to remove a marijuana legalization initiative from the ballot in 2020.

After Idaho legislators refused to expand Medicaid coverage, the grassroots group Reclaim Idaho organized a 2018 initiative campaign, winning by a 22-point margin. Idaho later enacted a law requiring that initiative petition signatures come from 6 percent of voters in all of Idaho’s thirty-five legislative districts, including those up to eight hours away from the state capital in Boise. The intent to disenfranchise voters was so blatant that the Idaho Supreme Court struck down the law last year.

Demanding signatures from every district or county not only enables a single extremely progressive or conservative locality to limit policy for an entire state; it also carves a path for corporate front groups to derail pesky populist campaigns in their infancy.

Instead of spending $63 million statewide, as the utility NV Energy did to stop a Nevada initiative that would have ended its lucrative electric monopoly, a corporation could likely stifle a potential new bill by saturating just one district with attacks. Since the US Supreme Court ruled to forbid restrictions on corporations’ ballot spending, many proposed hurdles for ballot initiatives would impact only grassroots efforts. This development flips the original intent of ballot initiatives — empowering citizens against the power of powerful corporate interests.

Along with working to stop citizen initiatives from reaching their state ballots, lawmakers are also trying to ensure that the measures that make it onto the ballot are unlikely to pass.

In Arizona, for example, citizens voted Republicans into control of all state government branches in 2009 and have not wavered since. But when making the law themselves in 2020, Arizonans legalized marijuana and raised taxes on the wealthy to increase teachers’ pay. In response, legislators referred multiple constitutional amendments to this November’s ballot to restrict citizen lawmaking, including one requiring 67 percent, or supermajority support of voters, for any measure that proposes raising tax revenue.

In 2018, Florida voters surpassed a 60-percent supermajority requirement for initiatives amending the state constitution to restore the right to vote for most people with prior felony convictions upon completing their sentences. In response, Republican legislators altered the law postpassage to require that all fees and restitution must also be paid to regain voting rights — but there is no reliable way to check for unpaid liabilities, leaving 85,000 people in limbo. GOP governor Ron DeSantis recently exploited the situation by seemingly entrapping and arresting twenty people for voting after their registrations were approved.

State legislatures are also undermining implementation of successful progressive ballot initiatives. After Utah voters expanded Medicaid in 2018 via Proposition 3, legislators repealed and replaced the law, weakening it by imposing work requirements, capping the number of potential beneficiaries, and imposing other barriers to access. Utah is one of eleven states with no restrictions on legislative alterations, meaning the legislature can amend or repeal voter-made laws with a simple majority vote.

Politicians in Missouri have also tampered with laws already passed by voters. Legislators canceled voters’ will by refusing to implement the Medicaid expansion passed via citizen initiative in 2020 (despite federal funds covering 90 percent of the cost of expanded coverage) until a court ordered them to do so last year.

Lawmaking Restrictions Could Backfire on Conservatives

Based on the hostility of GOP officials, one might think direct democracy inherently favors the Left, but it’s enormously popular with citizens across the political spectrum. Progressive initiatives are more common today because two-thirds of the twenty-four states with citizen initiatives typically have trifecta Republican control of state government. But in states where Democrats gain control, we’ll surely see more conservative initiatives in the future.

Judging from past efforts, many of these conservative initiatives could prove successful. Voters in Florida and Colorado amended their state constitutions in 2020 to specify “only a citizen” of the United States is eligible to vote. Another Colorado initiative last year decreased state income taxes. Perhaps the nation’s best-known example of conservative citizen lawmaking is Proposition 13, from liberal California, which capped local governments’ ability to tax property for more than four decades.

Merely proposing citizen initiatives can shape policy, too. California’s infamous “three strikes” law, mandating lifetime imprisonment for many three-time recidivists, was passed by the state legislature in 1994 but was motivated by the desire to preempt a similar grassroots initiative. Years later, when stories of life imprisonment for people who were clearly not threats to public safety gained widespread attention, a citizen initiative to reform the law passed with nearly 70-percent support.

“Initiatives are a tool to give voice to people out of power,” John Matsusaka, director of the nonpartisan Initiative and Referendum Institute (IRI), told us. He said polls show a strong majority of people favor letting citizens propose and approve state laws by initiative. And it’s easy to see why.

IRI founder M. Dane Waters explained, “Voters like initiatives and referenda because they know what they are getting when they vote on a ballot measure.” Bills proposing some form of direct democracy are introduced regularly, though Florida was the last state to establish citizen initiatives in 1972.

Voting on initiatives typically transcends party lines in ways candidate elections rarely do and can change minds in the process. State-level citizen initiatives have yielded breakthroughs on many issues where legislatures refused to act, whether passing laws directly or forcing legislators to act. All this makes protecting and even expanding citizen lawmaking one key pathway to promote majority rule — and perhaps help mend the country’s gaping partisan divide.