Semiconductor firms are about to get showered with cash thanks to a new bill, the CHIPS and Science Act of 2022 — CHIPS standing for, cleverly, the Creating Helpful Incentives to Produce Semiconductors Act. Because it involved free money for capitalists, seventeen Republicans (out of fifty) voted for it despite their habit of voting against almost anything supported by Democrats except money for the Pentagon. Joe Biden signed it on Tuesday, August 9.

It’s a $280 billion package designed to encourage semiconductor manufacturing and research in the United States. Pundits and generals have watched with increasing alarm as chip-making moved from an industry dominated by the United States, and to a lesser extent Western Europe, to a heavily Asian affair, meaning Taiwan, South Korea, and China (the big threat lurking behind all the worry, of course). The COVID crisis highlighted how dependent US and European producers — carmakers, computer companies, appliance manufacturers — have become on Asian chipmakers.

The CHIPS Act is supposed to address all that, bringing the industry back home and restoring Silicon Valley to its rightful place of global dominance. But that’s not all. When she wasn’t stoking war with China (which would require plenty of advanced chips, presumably sourced from countries other than China), Nancy Pelosi took time out to say that the CHIPS Act would create “nearly 100,000 good-paying, union jobs.” One is skeptical.

Among its provisions is $53 billion in subsidies to the US chip industry to encourage domestic R&D. Of that, $39 billion is a direct subsidy, and the rest is for “workforce development” and speeding up the “lab to fab” pipeline. The bill also includes large tax write-offs for companies that expand chip facilities in the United States, which would theoretically close the cost gap between building here and abroad. Aid won’t be confined to American firms; industry leader Taiwan Semiconductor Manufacturing Co (TSMC) will be eligible as long as they do the work here.

The Biden administration is touting a plant Intel is building in Ohio — he even devoted 147 words to it in his State of the Union address — as proof of the CHIPS Act’s powers, but Intel has been playing politics with the project. In June, impatient with congressional dithering on the bill, it canceled a formal groundbreaking ceremony, emphasizing that it’s building plants in countries that have gotten their subsidy act together. (Mercifully, the EU has its own Chips Act.) Intel also said its long-term plans for the site would depend on the continuing flow of free federal cash. (TSMC said its investment plans also depended on the adoption of the bill.) On its passage, ​Intel CEO Pat Gelsinger said, “I’m excited to put shovels in the ground as Intel moves full speed ahead to start building in Ohio,” though I suspect Gelsinger himself won’t be operating any shovels. Intel may be happy, but just last month, some smaller firms were complaining that it and the other giants would get all the money and they’d be frozen out.

About $200 billion will be also devoted to basic research in computing, robotics, and semiconductors through the National Science Foundation and other federal agencies. Universities getting grants under the program would be prohibited from participating in educational partnerships with the Chinese government known as Confucius Institutes. These have been under relentless attack for nearly a decade as the anti-China campaign ramps up.

Worries have been raised about the return of “industrial policy,” pronounced dead in the 1980s (though the Reagan administration did craft a giant aid package for the chip industry known as SEMATECH). Rather than the return of industrial policy, what’s actually distressing is watching public money go into private coffers with so little coming in return.

The CHIPS Act bars its beneficiaries from using the money to do stock buybacks or pay dividends, though it’s not clear how one set of a few billion dollars can be distinguished from another. It would also deny money to firms expanding in China and other countries deemed unfriendly. Economic warfare is ramping up.

Criticism of the bill from the Left has largely focused on the quickness of US firms to expand abroad. Bernie Sanders said, “Any company who is prepared to go abroad, who has ignored the needs of the American people, will then say to the Congress, ‘Hey, if you want us to stay here, you better give us a handout.’”

He is right, though that is pretty standard practice in American capitalism. His colleague Sherrod Brown, who might have been relied on for a denunciation, likes the bill because of the Intel plant in his state, Ohio. And few Congresspeople could turn down cash for universities in their states and districts.

It was probably an oversight, but Sanders could also have pointed out how much the likely recipients have already spent on stock buybacks. It’s a small fortune.

Between 2010 and 2021, ten top semiconductor firms spent $168 billion buying their own stock. (The ten firms, in declining order of total buybacks, are Intel, Texas Instruments, Applied Materials, Broadcom, Analog Devices, Nvidia, Micron, KLA, Marvell, and AMD.) Here are graphs of the running total of buybacks for those ten firms and Intel, the biggest chip firm. It alone spent $86 billion over the same period. Both sums vastly exceed the $39 billion the government is showering on the industry in direct subsidies. 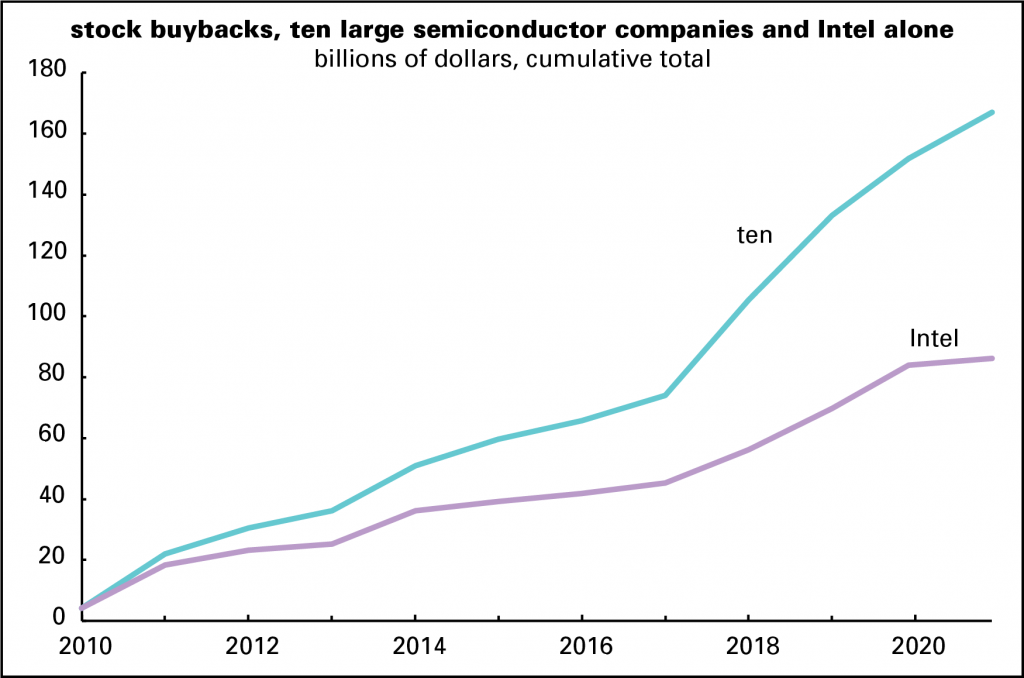 As this graph shows, there was a burst of buyback activity in 2018 and 2019. Probably not coincidentally, 2017 was the year when Donald Trump’s corporate tax cuts took effect. In theory, those were supposed to contribute to a burst of investment; they didn’t. Though the buyback pace eased after COVID hit, 2021’s total was still higher than all but one year between 2010 and 2017. 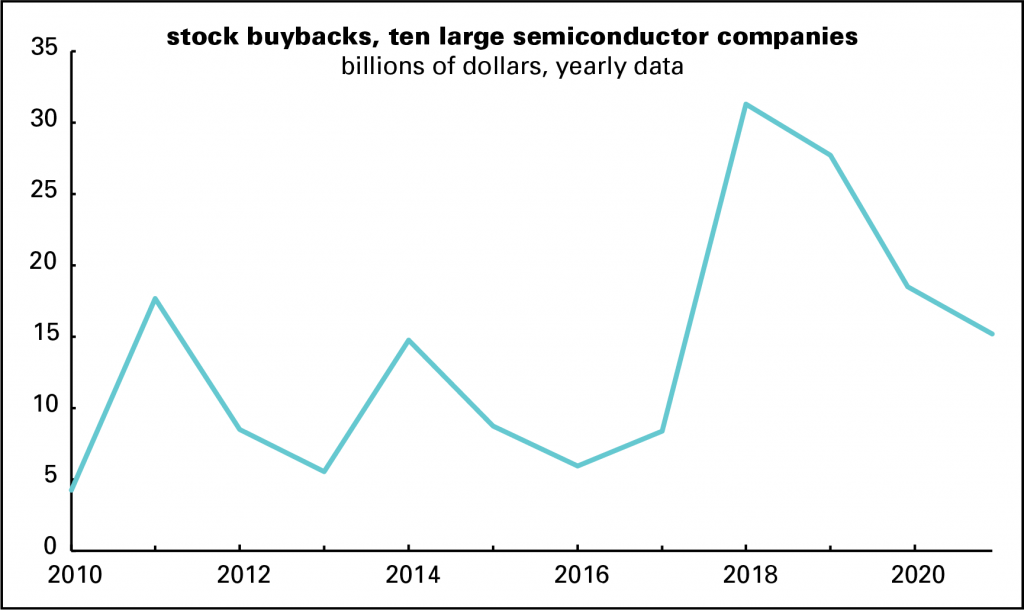 Buybacks do little but boost stock prices, making stockholders happy and fattening CEO paychecks, which are largely based on stock prices. They could have invested the money, but that sort of thing is frowned upon in the higher Wall Street consciousness. Better to “return” the cash to shareholders, as they say, even though they actually provided no cash in the first place. Stockholders just buy their shares from previous stockholders, not the company.

Since Intel is so big, we also looked at its earlier buybacks, starting in 1990. That prehistory adds another $69 billion to the company’s total buying spree, taking the thirty-one-year total up to $152 billion.

As I’ve argued elsewhere, the US economy has long been plagued by low and declining levels of net investment, a result of the shareholders-first doctrine of the last four decades. Fortunately for the semiconductor industry, Uncle Sam is effectively picking up the tab for its buyback spree.