The Senate is expected to reach an agreement this week on a bipartisan Ukraine defense bill. Partisan disagreement over the type and timing of the sanctions part of this bill has stalled its progress, but there are no partisan hang-ups over the military aid portion: both parties support triggering an influx of US weapons into Ukraine.

Previous legislation shows just how much agreement there is on this point. A recent bill sponsored by Republicans would authorize $386 million in military aid for Ukraine. A similar bill pushed by Democratic leadership would authorize $500 million for the same purpose. Moreover, both bills prompt Biden to use his drawdown authority — which allows the president to transfer items in US military stockpiles to non-US militaries — “to the maximum extent available” for Ukraine. Moreover, each piece of legislation instructs the Pentagon to offload its surplus matériel — “excess defense articles” — in the country.

Another Republican bill would permit a lend-lease-style agreement with Ukraine that would allow Biden to transfer even more weapons without needing money from Congress or Ukraine to do it. The Democrats’ bill also supports direct loans of combat gear to Ukraine, albeit to a more limited extent than the Republican version. In short, Republicans and Democrats are both sold on the idea of flooding Ukraine with American weapons. 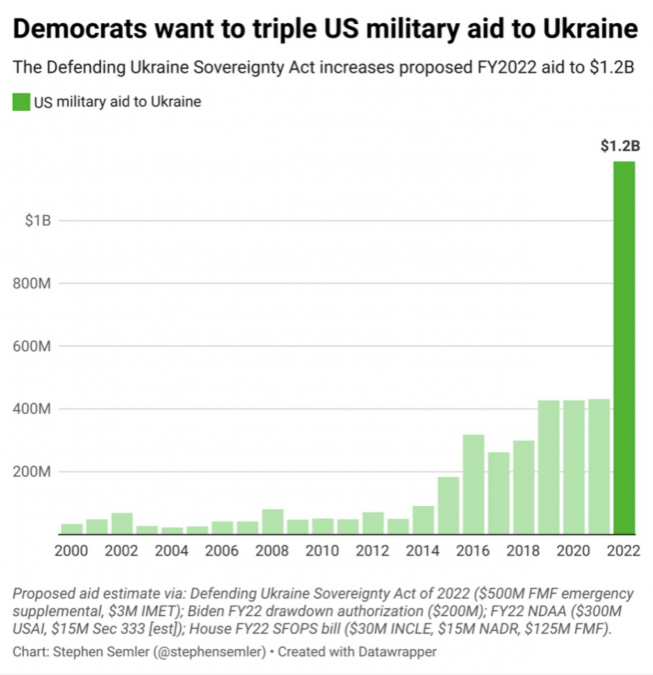 Congress’ justification for transferring these weapons is that they will deter Russia from invading and enable Ukraine to successfully defend itself should an invasion occur. Neither justification is credible — US military aid won’t accomplish either.

Russia has an overwhelming military advantage over Ukraine. The capabilities gap between the two militaries is too wide to be bridged even by the deluge of weapons Congress plans on authorizing. Despite insistence from Congress and the US foreign policy establishment, the outcome of a war between Russia and Ukraine will not hinge on US military aid. Neither will Russia’s decision to start such a war to begin with. Whatever inconveniences, if any, US weapons pose to Russian forces pale in comparison to the costs Russia will incur by sponsoring a ground invasion while being showered with severe economic sanctions levied by Western countries.

Despite the military aid package being functionally useless, it further risks escalating tensions in the region. Considering the risks associated with weapons proliferation in general, the best effect this policy decision can have is no effect at all.

The only clear beneficiaries of Congress’ military aid proposal are US weapons manufacturers and the Pentagon. For example, the Democrats’ bill authorizes “$500,000,000, as an authorization of emergency supplemental appropriations, for Foreign Military Financing assistance to Ukraine.” In plain English, this means giving Ukraine a $500 million gift card to purchase weapons exclusively from US arms companies.

The Pentagon will also capitalize off the bipartisan bill. Both the Democrat- and Republican-sponsored legislation includes language directing the Pentagon to transfer weapons pulled directly from its own stockpiles. This provides a convenient opportunity for the Pentagon to upgrade its arsenal just in time for its fiscal year 2023 budget request, rumored to be released next month. The Pentagon will likely urge Congress to buy newer versions of the same weapons that it sends to Ukraine.

Congress’ military aid proposal isn’t much more than an arms dumping program. The bill should be rejected on these grounds alone. There is still time for progressives in Congress to make this point clear to their constituents and peers to cultivate opposition to the pending legislation, but not much.