As inflation reached a three-decade high this month, conservatives in Congress capitalized on the moment by pinning the surge in prices entirely on government spending. The Republican National Committee advised Americans, “Be prepared to pay more this holiday season because of Bidenflation.”

This narrative is far from universally accepted, but it has put Democrats on the defensive as one of Joe Biden’s staple pieces of legislation — the $1.75 trillion reconciliation bill, or Build Back Better Act — awaits consideration in the Senate. The real or imagined threat of inflation could derail its progress entirely.

Biden didn’t help his cause when he blamed inflation on the $1,400 stimulus checks authorized by the COVID-19 relief bill. Prices have gone up because “people have more money now because of the first major piece of legislation I passed,” Biden said in a speech earlier this month, calling it an “irony.”

Military spending is expected to be twice that amount. According to the ten-year funding plan endorsed by Senate Appropriations Committee Democrats, the Pentagon should get at least $8.31 trillion from fiscal years 2022 through 2031. 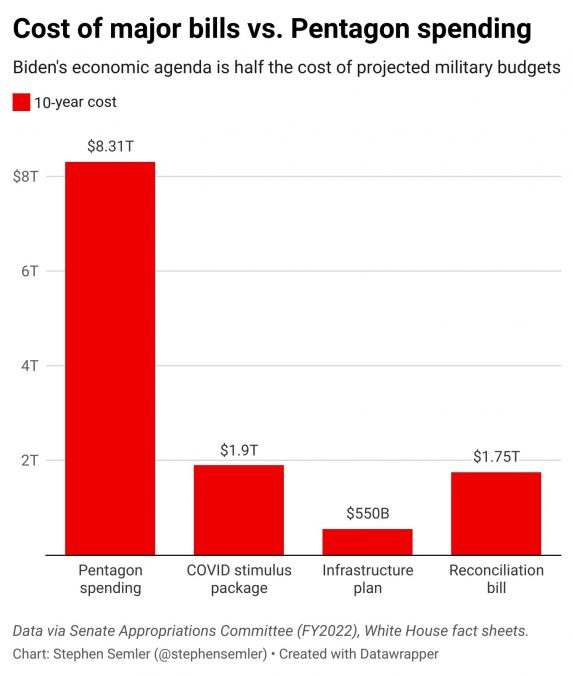 The difference between military and social spending is more than just a (vast) funding disparity, however. Military spending plays by a different set of fiscal rules entirely.

Earlier this month, House Democrats ordered the Congressional Budget Office (CBO) to “score” the reconciliation bill’s impact on the national debt. The purpose was to find out whether the bill was in fact fully “paid for” by the various offsets — like raising taxes and better enforcing existing ones — included in the bill that Democrats had spent months tinkering with.

Congress behaves much differently when a military spending bill is on the floor. The Pentagon budget for next year stands at $778 billion, or roughly 4.5 times the average annual cost of the reconciliation bill. Even though it is not “paid for” at all, the Pentagon budget bill will likely pass the chamber handily. It’s even scheduled to be voted on before the reconciliation bill.

The House passed a military bill of the same value in late September. At no point did House Democrats call in the CBO to calculate its impact on the deficit. Moreover, its passage wasn’t delayed by months to figure out how to offset its cost, either. Military budgets don’t get asked “How do you pay for it?” like budgets for social uplift do.

At least they haven’t since the Vietnam War. No US wars since then have been “paid for” with a corresponding tax increase. 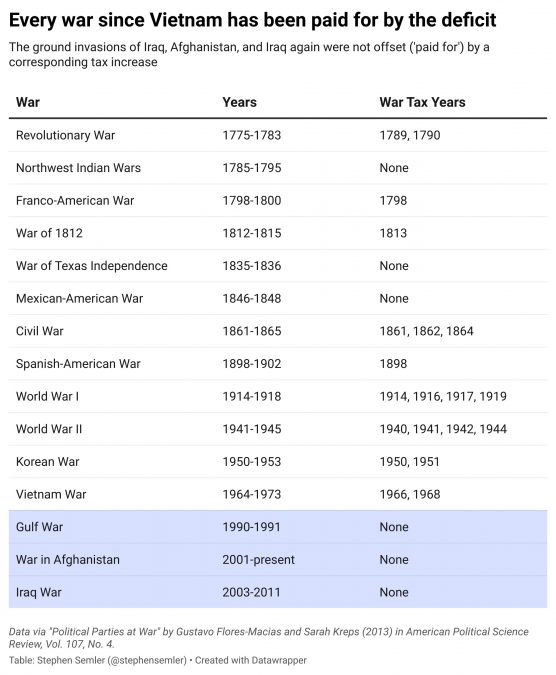 The Pentagon budget might be the final source of leverage Biden has left to advance his economic agenda. In the near term, this means he must commit to vetoing the Pentagon budget until the Senate passes his reconciliation bill intact.

Biden will likely have to deploy similar tactics for the rest of his term if he intends on passing other social spending bills. However, there is no indication that Biden will do this on his own, so it’s incumbent on progressives to present this case to him, publicly and relentlessly.