In recent months, US lawmakers have condemned Facebook for harming children’s health, amplifying violence from Washington to India, and disseminating misinformation surrounding COVID-19 and its vaccine. The criticisms follow a leak of thousands of internal company documents known as the Facebook Papers, which reveal that despite knowledge of its products’ role in fueling a range of toxic behaviors, Facebook has refused to take any meaningful action in response, putting its profits before social health.

Yet while lawmakers are exploiting the leak’s political fallout to ramp up ongoing attacks on the tech giant, taxpayers might also be interested to know that the US government has funded programs to assist opposition political parties and activists in using Facebook to undermine foreign governments. Venezuela is a case in point.

Following the death of Socialist former Venezuelan president Hugo Chávez, the National Democratic Institute — an independent arm of the US government created to fund and support political parties abroad in a more formal manner than the Central Intelligence Agency — funded members of the Venezuelan opposition to use the social media giant to mobilize their supporters and draw followers of the Socialist government “across the aisle.” We recently received US government documents from a Freedom of Information Act (FOIA) request that illustrate how the government developed a program focused on using Facebook to assist the Venezuelan opposition in municipal elections in 2013 and legislative elections in 2015. The documents show, in other words, that the US government is actively using social media to meddle in other countries’ elections.

Activists across the world have used Facebook, Twitter, and other online mediums to transmit messages, coordinate protests, and even take down governments. Given the importance of Facebook in particular, there has been increased pressure to regulate messaging on the site. US lawmakers, for instance, have decried the company for failing to crack down on alleged disinformation campaigns from Russia designed to sow chaos and influence elections in the United States. In addition, many have denounced the corporation’s failure to crack down on Trump-supporting activists who claimed the 2020 elections were fraudulent and used the site to organize the January 6 rebellion in Washington, DC.

In the wake of the Facebook Papers, US lawmakers have reignited their criticisms of the tech giant. The documents reveal that Facebook executives knew that their platforms’ “core mechanics” (i.e., algorithms) drive users to the most sensational, controversial, and polarizing posts within their feed, resulting in a range of socially toxic effects.

For example, the documents reveal that despite internal research verifying that the company’s Instagram app harms children’s self-esteem, Facebook executives pushed forward with plans to develop a similar app for children under the age of thirteen — and only halted these plans two weeks after the Facebook Papers came to light. They also detail increasing concern among the company’s rank and file about the platform’s broader social impacts, ranging from its facilitation of political violence and the spread of COVID-19 disinformation to its use by drug cartels, human traffickers, and armed groups to hire hitmen, document murders, lure women into servitude, and promote genocide in countries like Myanmar.

The documents show that, in response, Facebook executives prioritized profits by refusing to take any concrete action — opting for public-relations management tactics instead — out of concern that altering their algorithms would reduce user engagement and thus the platform’s growth.

The result has been the worst political crisis in the company’s history (at least since Cambridge Analytica), inciting the company to announce a rebranding. Both Democratic and Republican lawmakers have capitalized on the crisis to further lambast Facebook, even signaling bipartisan support for increased regulation of the tech giant.

Senator Marsha Blackburn (R-TN), for instance, has stated, “It is clear that Facebook prioritizes profit over the well-being of children and all users,” while Senator Richard Blumenthal (D-CT) suggested that this may be Facebook’s “Big Tobacco moment,” referencing the outrage and decreased tobacco use in the United States following revelations of the industry’s machinations to sow doubt regarding the negative health impacts of their products.

It is somewhat amusing to hear US senators express their concerns with a corporation’s orientation toward profit-making in a capitalist society — especially when several of them own millions in Big Tech stock. But whatever criticisms American politicians have of Facebook’s impact at home, the US government is not above using Facebook to advance its own imperialist policies abroad.

A US-Funded Plan for Intervention

Beginning in October 2013, the National Endowment for Democracy (NED) — a government agency created by the Reagan administration — provided nearly $300,000 for the National Democratic Institute (NDI) for a program titled Venezuela: Improved Training and Communications Skills for Political Activists. The NDI was also founded under the Reagan administration, as the international arm of the Democratic Party, alongside its GOP counterpart, the International Republican Institute. Both groups, however, often work alongside one another and support many of the same actors and objectives abroad.

The NED remains the parent agency of both groups and receives nearly all of its funding from taxpayers. Though the NED and NDI claim their independence from the US government, they must both report their activities to Congress, which remain subject to FOIA requests.

The outrage over alleged Russian intervention in US electoral campaigns hasn’t ceased. Why, then, is it permissible for the US government to engage in explicitly partisan behavior abroad?

In the program’s description, the NED claims that the Venezuelan government has sought to control the country’s “mass media,” using it as a tool to coerce its citizens. As a result, the NED reports that opponents and “political activists have particular challenges in communicating with citizens as well [as] organizing and mobilizing supporters.” Alternatively, the NED describes social media as “less vulnerable to government restrictions and . . . a useful tool for independent political activists in Venezuela to disseminate messages and organize.”

While the NED carefully describes such activists as independent, it is clear that this program was designed for activists and party members associated with the umbrella opposition organization the Democratic Unity Roundtable, or the MUD (Mesa de la Unidad Democrática).

Formed in 2008, the MUD remains the largest bloc of opposition parties within Venezuela, seeking to unify existing opposition parties behind one consensus candidate against members of the Socialist Party of Venezuela (PSUV), the party of Chávez and Maduro, in electoral contests. Some of its main parties include Primero Justicia, La Causa Radical, Un Nuevo Tiempo, and Voluntad Popular, of which Juan Guaidó — the US-backed opposition leader who has attempted to undemocratically depose Maduro, including by force, and who some countries recognize as the rightful leader of Venezuela — remains part.

Following Chávez’s death in March 2013, and the subsequent presidential victory of his successor Nicolás Maduro the following month, the opposition began to strategize for municipal elections in December 2013 and, just as importantly, legislative elections in 2015. The NED recounts that while social media remains key to contemporary political organizing, the opposition was unequipped in “the use of social media and other information and communications technologies (ICTs).”

In response, the NED funded the NDI to provide several services for the Venezuelan opposition.

First, the NDI planned and hosted “a seminar outside Venezuela on the use of technology and social media for citizen outreach and engagement.” In addition, the NDI created a “Virtual Toolbox” hosted on a respective site titled Red Innovación, a site also funded by the NED, offering “online customized capacity-building course on a range of issues relating to political innovation.” The site and its courses remain active. 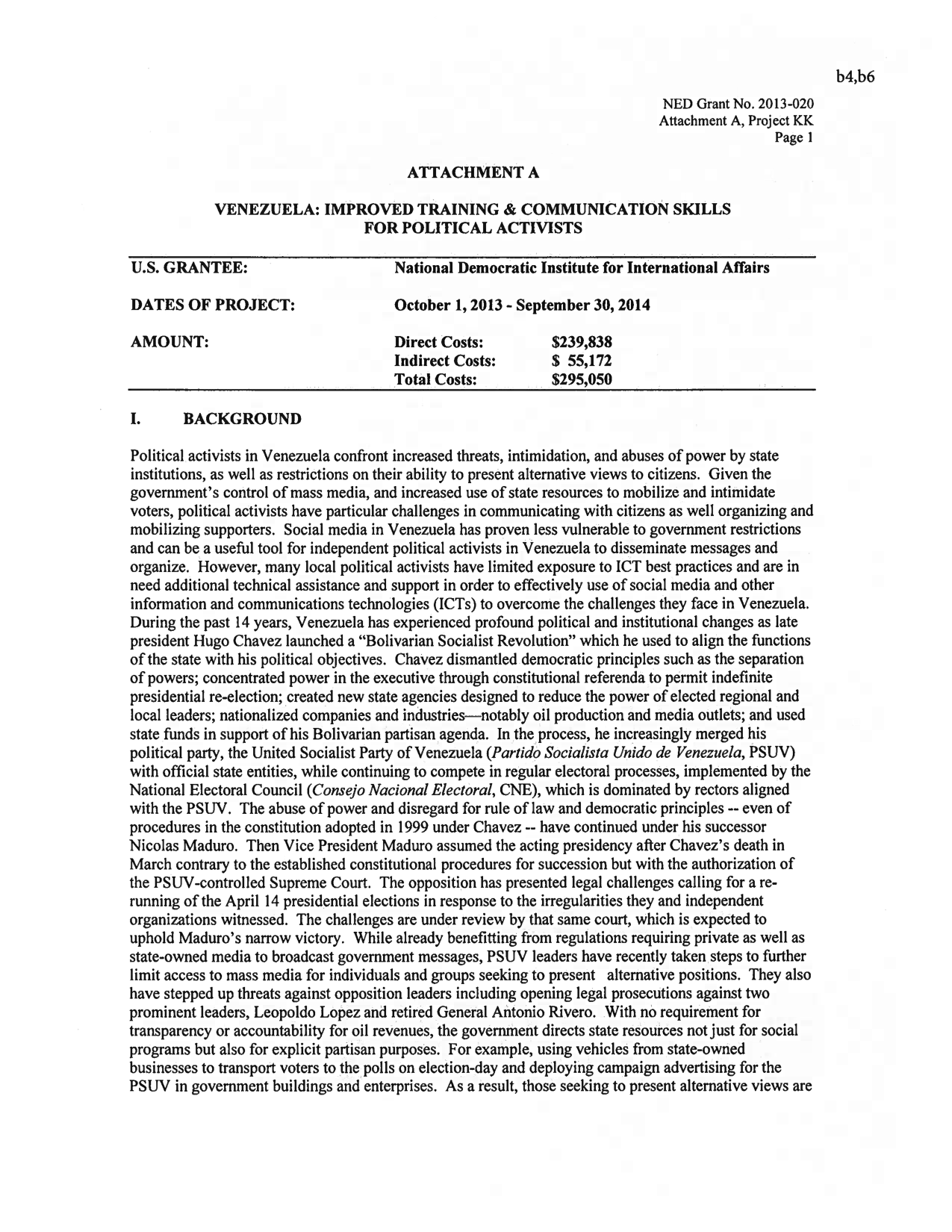 Following municipal elections in December 2013, NDI staff hosted a “strategy review session” with members of the opposition “to develop longer-term strategies to maintain contact with citizens and improve their ability to communicate and disseminate information using ICTs.” In addition, the NDI hired a consultant “to provide ongoing coaching for program participants.”

Following the implementation of its program, the NDI discussed its results on its website. Indeed, they deemed this program a case study in success.

With NDI funding and training, the MUD “mobilized a voter database that identified and targeted swing voters through social media” and, indeed, in December 2015, the opposition won a majority in the Venezuelan National Assembly for the first time since Chávez came to power in 1999. The NDI describes how the MUD created a voter database, allowing “them to extrapolate conclusions about political party leanings for large portions of the electorate . . . calculat[ing] the likelihood of a voter being a PSUV supporter, a MUD supporter or a swing voter.”

the MUD carried out its social media campaign on Facebook, which targeted voters with different messages taking into account their political leanings. The MUD targeted Group A voters with get-out-the-vote messages, while they targeted Group B with information about PSUV candidates designed to draw them across the aisle. Using their database, the campaign also identified 8.5 million voters on Facebook and targeted them with similarly specific messaging. Facebook metrics indicated that the targeted messages were reaching more people than previous campaigns had. By election day, the campaign reached 6.3 million voters and 2.9 million voters had interacted with the campaign’s Facebook content at least once.

In the end, the NDI claims credit for the opposition’s success, writing that this strategy “ultimately played an important role in their resounding victory in the 2015 election” and that a “determining factor in the success of the coalition in the parliamentary elections of 2015 was a two-year effort prior to the elections to raise awareness, train and align national and regional structures of communication of all the parties that conform the MUD” (italics ours). Indeed, the NDI organized this “two-year effort” to train MUD members to use social media in its campaign against the PSUV as detailed in the grant they received from the NED.

Neither NED staff nor NDI staff returned messages for comment.

A Long History of US Intervention

It’s not surprising the US government would fund such a program. The United States has a lengthy — and bloody — history of intervention throughout the world, particularly in Latin America. It even sought to create a new social media platform in Cuba in order to depose the government. And in Venezuela, over the past two decades, the US government has continually sought to depose Chávez and now Maduro from power. Yet these strategies have ultimately failed, illustrating some of the limits of US imperialism.

The Venezuelan government has undoubtedly become more authoritarian under Maduro. The question that these newly obtained documents raise, however, is not whether Maduro is “good” or “bad” but whether or not US taxpayers should be funding and training Venezuelan opposition members to use Facebook for their right-wing political campaigns.

Indeed, the outrage over alleged Russian intervention in US electoral campaigns hasn’t ceased. Why, then, is it permissible for the US government to engage in explicitly partisan behavior abroad? Why does the US government receive a pass — despite its long history of violence — in intervening in other countries’ political processes?