We shared the above graph last Labor Day — but it’s so important, we want to share it again.

Please spread this information far and wide, since this is data everyone should see on our annual celebration of the labor movement.

I’ve also combined the union density graph with another from EPI showing the break between worker productivity gains and worker compensation gains. It tells an important story about what happened between 1948 and 2017.

With less union strength, workers simply started getting paid less. With fewer unions, workers’ productivity gains that had previously been compensated were instead pocketed by owners and shareholders. (For more on this phenomenon, read this terrific backgrounder.)

Yes, wages have recently increased a bit — but the overall point still stands. 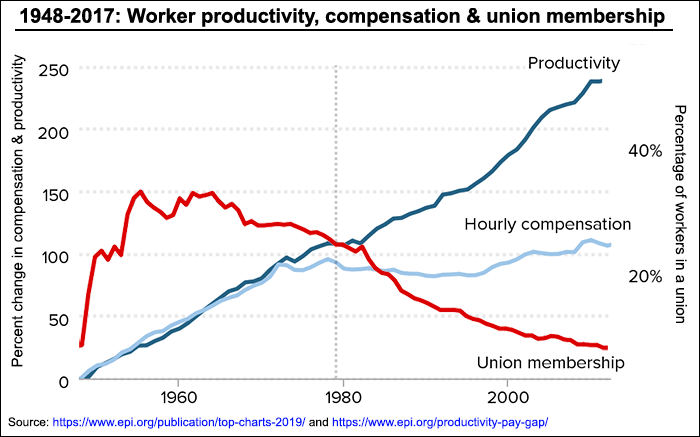 Forward these graphs to your family and friends. Tweet it. Post it on your social media feeds.

On this Labor Day, tell as many people as you can that if we hope to ever rebuild an economy that works for everyone, we need everyone to remember that there is power in a union.