The American Rescue Plan Act (ARPA) temporarily increased the duration, coverage, and generosity of unemployment insurance (UI) benefits until September 6 of this year. Between June 12 and July 10, all twenty-five GOP-led states prematurely eliminated these benefit increases for their residents and the Biden administration declined to use its statutory authority to prevent these cuts.

Early data from the Census Household Pulse Survey show that these cuts have been effective at removing people from the unemployment rolls but not successful at increasing employment. If this data is accurate then it suggests that, when these same cuts hit the more populous other half of states on September 6, they will do enormous damage to tens of millions of Americans.

The effect of UI cuts should be apparent in the first group of states because the last wave of pulse data was collected entirely after those cuts occurred. For the second group of states, the effect of the cuts should be apparent in the next wave of pulse data, which has not yet been released. For the third group, there should be no detectable change because no cuts have occurred in those states. 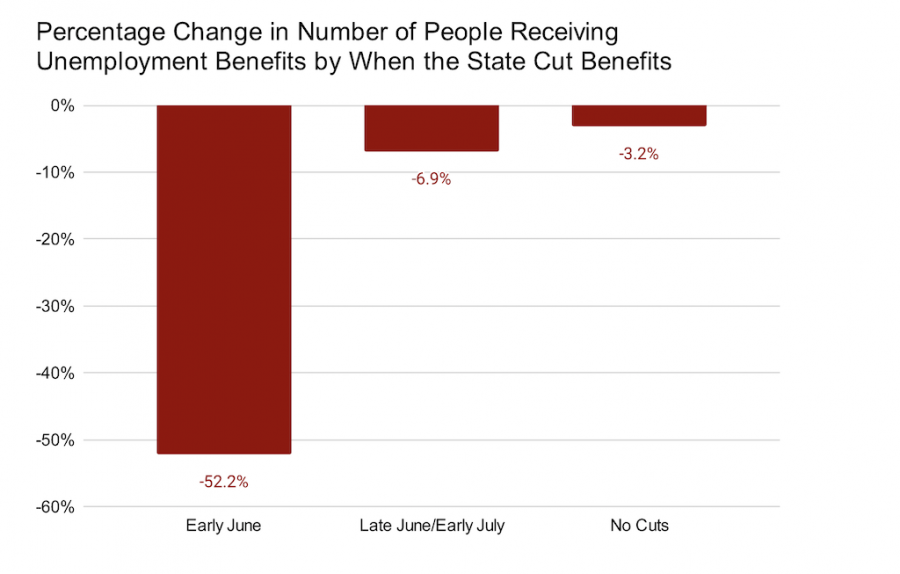 These numbers actually understate how deep the cuts were in the Early June states. Half of the recipients had their benefits cut entirely, as reflected in the graph, while the other half had their benefit levels cut by $300 per week, which is equivalent to a cut of $15,600 per year.

The given reason for doing these cuts was to increase employment in these states by moving people off of the dole and into workplaces. But employment did not increase in the Early June states. In fact, it slightly decreased (-0.4 percent) according to the pulse data.

The one saving grace of this whole debacle so far has been that the majority of the population (unemployed or otherwise) live in the states that have not yet cut benefits. But those cuts are coming on September 6 and are likely to be quite devastating in their magnitude.

According to the latest pulse data, there are seven million individuals receiving unemployment insurance in the states that have not yet cut UI benefits. Those individuals live in households with an average of 3.7 members, bringing the total number of people who directly or indirectly receive this UI income to twenty-six million. If we optimistically assume that 1.5 million of the direct UI recipients come off the rolls before September 6, that leaves us with 5.5 million people on UI and 20.5 million living in households on UI.

Based on the experience of the Early June states, the September 6 cuts will entirely eliminate UI benefits that over ten million people are relying upon and steeply cut (by $300 per week) the benefits of the remaining ten million people.

Needless to say, the Democrats should do whatever it takes to prevent such a catastrophe from occurring while also taking steps to restore unemployment benefits to individuals who have already seen them prematurely cut off. In practical terms, this means that the Democrats need to include further UI extensions in the next reconciliation bill while also ensuring that the federal government will step in and directly administer UI for the residents of any state where the governor refuses to play ball.