Buried in a new Treasury Department report is one graph and one stat that tells the entire story of America becoming a lawless tax haven for the wealthy.

The graph on page 10 of the report shows that the Internal Revenue Service’s budget has steeply declined as a percentage of the economy’s overall size. Put another way: The agency policing tax crime has significantly shrunk in comparison to the economy it is supposed to be patrolling. 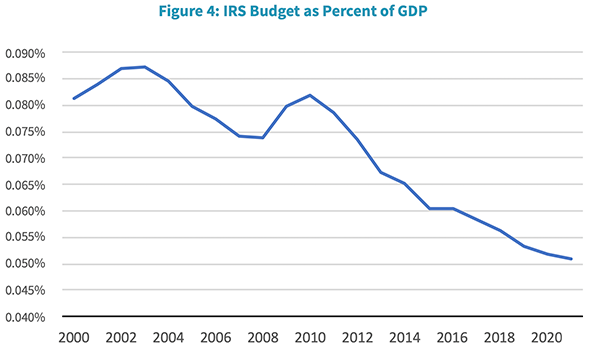 The shrinking, however, has not been uniform across the board — the enforcement reduction has been particularly acute in the parts of the agency that police very wealthy people. Indeed, between 2010 and 2018, the audit rate of individuals making more than $1 million declined by a third more than the audit rate declined among the general population.

It gets even more pronounced when looking at the difference between millionaires and those who receive the Earned Income Tax Credit (EITC), which is available to individuals making less than $16,000 a year.

As of 2018, the IRS audits EITC recipients at nearly double the rate that the agency audits all corporations. Yes, the audit rate for megacorporations with more than $20 billion worth of assets remains higher than for those low-income Americans, but that rate was nearly cut in half between 2010 and 2018. And the overall corporate audit rate — which includes audits of all companies — is 0.88 percent as compared to a 1.41 percent audit rate for EITC recipients.

These trends exemplify how our government as a whole has created two entirely separate systems of law enforcement — one for rich people, and one for everyone else, as illustrated by a recent op-ed by former federal prosecutor Paul Pelletier. He describes prosecuting a tax preparer committing $100,000 worth of tax fraud and then compares it to what we now allow:

That crime was not even one-100th as harmful as what Robert Smith, the billionaire private-equity investor, did. His tax fraud, which he admitted to, was massive — possibly the largest in history — and took place over at least a decade and a half. He went to elaborate lengths to hide more than $200 million from the IRS, which meant that he avoided at least $43 million in taxes.

Unlike the Pork & Beans case, though, Smith faced no prosecution and served no time. He hired expensive lawyers who successfully negotiated a “non-prosecution agreement,” in which Smith paid some taxes and a fine — though leaving the bulk of his billions intact — and did not have to bear the stigma of a criminal conviction.

For every Robert Smith who at least gets caught, there are countless who aren’t scrutinized at all.

That explains the recent estimates that the wealthiest 1 percent are evading about a quarter trillion dollars of owed taxes every single year.

It also explains why the Biden administration’s proposed IRS investments are projected to raise so much money — up to $2.3 trillion over the next two decades.

And it explains why such investments in tax enforcement are so necessary — and so long overdue.