On Twitter, the mysterious and pseudonymous James Medlock (who tweets about lefty policy stuff, but is also some sort of cult figure?) recently hosted a group commiseration session about a malady that is shockingly widespread, but about which too many of us remain heedlessly ignorant.

It turns out that vast swathes of adult Americans — including some of the finest citizens in your community: teachers, doctors, businessmen — do not understand how our marginal-rate tax system works. They think that if you’re in the 24 percent tax bracket, you pay 24 percent of your income in taxes; then if you get “pushed” into the 32 percent bracket, you have to pay 32 percent of your income.

Now, it’s hardly news that this misconception exists in the world. But reading Medlock’s tweet thread, one begins to realize to one’s horror the sheer scale — the almost Biblical scale — of the cluelessness.

One guy recalls that in his high school, the marginal-rate delusion was literally taught as part of the curriculum; his economics teacher would insist “that we had to be very careful not to get bumped into higher tax brackets and implied this would be a lifelong math problem.” Another guy recalls having a gym trainer who mentioned in passing that “his financial advisor [urged] him to stay below a certain income threshold to avoid the higher tax bracket… his FINANCIAL advisor 🤯.”

Medlock shared an article from USA Today a decade ago that was part of a recurring feature devoted to “math tips”; one of the tips was to make sure your income doesn’t get too high, lest you wind up in one of the dreaded Higher Tax Brackets.

Once you start to think through it, the implications are staggering. Millions of people think they’re paying thousands of dollars more in taxes than they actually are. When they hear that Joe Biden wants to lift the top marginal tax rate from 37 percent to 39.6 percent, they think that means a taxpayer in the top bracket will have to fork over an extra 2.6 percent of their income in taxes — more than $15,000 for someone with an income of $600,000 — when in reality that person’s tax bill would only rise by about $2,000.

I encourage everyone to peruse the tweets in Medlock’s thread(s), because it’s the details that are so devastating.

The New York Times once quoted a chiropractor who seemed to be laboring under the same misunderstanding https://t.co/B8QE2kifbO pic.twitter.com/bwiP1rmogT

I'm honestly stunned so many people got it right. In my experience this is an extremely pervasive error.

The Marginal Rate Delusion is enough to bring on despair: How can you maintain support for a progressive income tax when so many people think the tax operates in such an irrational and unfair way? And when they massively overestimate the tax rates it involves?

But guess what. It turns out you don’t actually need marginal tax rates to operate a progressive income tax. We know this thanks in large part to France’s Popular Front and its government led by Léon Blum.

When the Popular Front — the coalition of socialists, communists, and radicals led by socialist party leader Léon Blum — came to power in 1936, one of the first things they did was prepare for the abolition of the existing marginal tax rate schedule and its replacement with a schedule based on average rates.

The new French tax schedule consisted of two columns: the left-hand-side column was a long list of taxable-income intervals (for example, 3,000F to 3,100F); and the right-hand-side column showed the corresponding average tax rates (e.g., 26 percent).

From the point of view of socialists — and of democracy in general — the great advantage of an average-rate tax schedule is its transparency. If we decide that someone making $600,000 a year should pay 40 percent of their income in taxes, we can simply write “40 percent” into the tax code next to $600,000, and everyone can judge for themselves whether they think that’s fair. Under the current system, figuring out how much tax people at different income levels actually have to pay is in practice impossible for most nonexperts, even ignoring the many complications resulting from deductions, exemptions, credits, and so on.

There’s a second important advantage, which is best conveyed with a concrete example. Under the current US tax schedule, a single individual with $600,000 in taxable income is subject to an average tax rate (the percentage of their income that they actually have to pay) of just a bit more than 30 percent. (Of course, their marginal tax rate is higher: 37 percent, the rate of the top tax bracket.)

Now suppose we think such a person ought to pay 40 percent of their income rather than 30 percent, but we see no particular need to adjust anyone else’s tax rate. Under the existing marginal-rate system, we would have only two choices. If we were determined to restrict any tax increase to the top bracket alone, we would have to jack up the top marginal-rate from 37 percent to somewhere north of 100 percent. That’s because less than 15 percent of Mr Six Hundred Thou’s income actually lies inside the top bracket; so to increase his tax bill by 10 percent of his total income using only a change in the top marginal-rate, we’d need that rate to rise by 67 percentage points — i.e., two-thirds (10 percent/15 percent) — from its current 37 percent level.

This is why in the years before the Popular Front’s arrival in power, socialists and communists condemned the marginal-rate system as  a “straightjacket,” an obstacle that stood in the way of one of their central policy objectives: to engineer a sharp increase in the taxes paid by the very rich — the semi-mythical “200 families” that Blum and the others denounced throughout the ’20s and early ’30s. They realized how difficult that would be under the marginal-rate system.

The story of the Popular Front experiment with average tax rates is recounted by Thomas Piketty in his massive history of top incomes in France (trans. Seth Ackerman), originally published in French in 1998.

I could be wrong, but as far as I have been able to tell, the episode has been completely forgotten and nothing has been written about it except by Piketty in this book. I even checked a book called Histoire Sociale de l’Impôt (A Social History of Taxes) and it didn’t even mention the average-rate system. 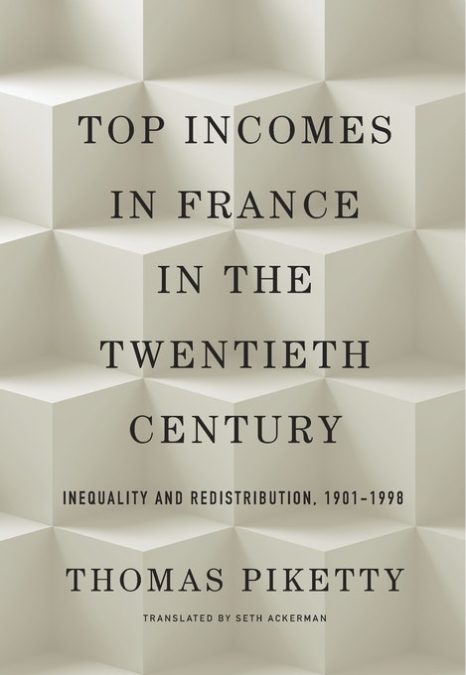 In the book, Piketty writes:

When the Popular Front in 1936 adopted its tax schedule defined in average-rate terms, one of its central objectives was of a pedagogical nature: to clearly display the amount of tax that the various strata of the income distribution would have to pay, and especially the amount demanded of “very large incomes,” in other words taxable incomes above 1.33 million francs….

[The difficulties that came with the new schedule] seemed quite small compared with the educational and symbolic virtues of the chosen system: this way, the Popular Front could put the “200 families” on display, like a trophy, while also providing an operational definition of these “200 families” from a tax perspective (that is, households with taxable incomes exceeding 1.33 million francs). And the political movements belonging to the Popular Front did not hesitate to put the brackets and tax liabilities they wanted to be applied to this group in their handbills and on their posters, and even on the front pages of their newspapers. Income-tax schedules, which have always been highly political documents, amply debated in Parliament and in the press, have probably never been disseminated as widely as they were in the Popular Front era.

But the most interesting aspect of the story is the reaction to the average-rate system from the French center and right.

Each time an average-rate-based schedule was proposed in the interwar era, its critics argued that it would grant governments overly broad margins of maneuver that they could use to impose a veritable “tyranny of the majority,” and that what the socialists really had in mind was the creation of a “class tax” in which a tiny group of taxpayers would pay for everyone else. Here again, the position on this issue taken by Allix and Lecerclé

— these were two big-shot law professors, close to the center-left in the Radical Party, and authors of the leading interwar treatise on the progressive income tax —

“who were ardent defenders of the progressive income tax, seems fairly representative of the wariness the technique inspired from interwar Radical and “centrist” circles: according to Allix and Lecerclé, the problem with schedules defined in average-rate terms was that they could easily lead to “abuse in applying progressivity to high incomes,” whereas “the technique of uniform tax rates with fixed brackets,” that is, the marginal-rate-based schedule in effect from 1919 to 1935, “ensures that tax increases and decreases affect all levels.”…The opponents of the Popular Front’s tax reform, which rested largely on the freedom of maneuver that came with a schedule expressed in average-rate terms, were not mistaken, and they strenuously denounced the demagogy and “short-cuts” made possible by abandoning the tax schedule expressed in marginal-rate terms.

When the Right returned to power in 1938, the imminence of war with Nazi Germany and the need for rearmament obviated any significant reduction in taxes, so the average-rate system was initially left in place.

It ultimately fell to the Vichy government to put an end to the experiment once and for all. The Vichyists would have liked nothing better than to cut taxes for the very rich, but for a variety of economic and political reasons such a step would have been impossible in 1942. And yet, despite the impossibility of actually cutting taxes, the regime went to the trouble of dismantling the average-rate system and restoring a marginal-rate schedule. As Piketty notes, the point was “to signal that the “exhibitionism” of the Popular Front was over.”

In the current struggle against the filibuster in the US Senate, the great theme the reformers have settled on is the idea that the rule is a “relic of Jim Crow.” Well, it isn’t really, but there is a kernel of truth to the claim, and it certainly packs a powerful rhetorical punch.

Maybe if we start ritually condemning the marginal-rate tax schedule as a “legacy of European fascism,” we will bring this country that much closer to the glorious day when the “tax bracket” is a thing of the past.