When news networks called the election for you, cheers broke out in the streets of Chicago, a city that the current occupant of the White House has repeatedly demeaned, insulted, and threatened. It was the biggest rush of collective relief this city has experienced since 2019, when we had just rid ourselves of another craven egomaniac with a legacy of destruction.

That man was former mayor Rahm Emanuel. We recently learned that you are considering him for a top position in your administration. Rep. Alexandria Ocasio-Cortez has already warned that progressives will not accept an Emanuel nomination, which would signal a disastrous direction for the new administration. Thousands of Chicagoans have signed a petition saying the same.

As an elected city council member of Chicago, with years as an educator and activist living, working, and organizing in communities that have been devastated by the policies Emanuel pursued as mayor, I write to insist in the strongest terms possible that you do not choose Emanuel as a staffer for your administration.

If you want to root out systemic racism, defend democracy, and build a society that leaves no one behind — all worthy goals mentioned in your victory speech — I can think of few people worse for the job than the man who earned the nickname “Mayor 1%” while in office. 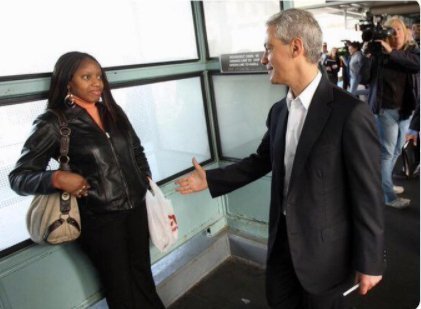 Rahm’s list of accomplishments in Chicago is enormous and brutal. Here are some of the highlights.

Rahm Emanuel covered up the police murder of seventeen-year-old Laquan McDonald in 2014.

Laquan McDonald’s killing — Chicago police officer Jason Van Dyke shot him sixteen times, including while McDonald lay on the ground — was appalling and served as a catalyst for Black Lives Matter movement organizing in Chicago. Emanuel clearly participated in the cover-up of this murder, perhaps the most important factor in his decision not to pursue an additional mayoral term in 2019 and dooming his political future in the city.

He carried out the single largest school closure in US history — over an outcry from parents, students, educators, and community members. Most of the schools served African American children on the south and west sides of the city, which are now missing key pillars of their communities. Meanwhile, some of the schools are now being converted into expensive apartment and condo buildings.

Over the pleas and protests of mental health service users, Emanuel closed more than half of Chicago’s public clinics. This shutdown has forced patients in need of care onto long wait lists and sparked a serious care crisis in black and brown working-class neighborhoods in the city.

Rahm Emanuel lavished wealthy neighborhoods and developers with public dollars intended to be used to support poor and working-class communities.

Through Chicago’s tax increment financing (TIF) program — which supposedly exists to fight “blight” in the city — Emanuel has given away enormous amounts of money to neighborhoods and institutions that are anything but blighted. Some of his greatest hits include giving $55 million to DePaul University to purchase a new basketball stadium, millions funneled to tourist magnet Navy Pier through an elaborate shell game, and another $2 billion in subsidies for luxury mega-developments on his way out the door.

Chicago has suffered a massive decline in affordable housing in recent years. Emanuel only stoked it further, overseeing a public housing administration that hoarded money instead of investing in expanded and improved public housing, while exploring new public housing privatization initiatives combined with staggering and deeply regressive property-tax hikes. These were all key factors in the decline of affordable housing in the city and the exodus of tens of thousands of black residents out of Chicago during his terms, part of a yearslong decline of nearly two hundred thousand in the city’s black population, as housing prices have gone up and public housing has been torn down.

The idea proposed by Musk and pushed by Emanuel to create a high-speed tunnel transit system from the Loop to the city’s main airport was absurd on its face, from a logistical perspective alone. But it was also a proposal that would sink enormous amounts of public money into a service that would serve the wealthy rather than transit systems used by average Chicagoans. The boondoggle was widely panned; one alderman, Daniel La Spata, called it a scheme “mostly for tourists and Musk’s reputation.” Thankfully, it never got off the ground, but the project says much about Emanuel’s priorities for the city.

Rahm Emanuel oversaw a police department that cost taxpayers more than $540 million for abuse and misconduct settlements during his time in office.

The sheer amount of police misconduct in Chicago is a deep shame, a moral catastrophe. But it’s also incredibly expensive. The city shelled out over half a billion dollars in payouts to victims of police misdeeds. Emanuel pursued no substantive reform measures to a police department whose misconduct the city could not afford.

Emanuel refused to end the city’s blatantly undemocratic method of assembling a school board, whose members are chosen by and accountable to the mayor rather than the people of Chicago. He also hand-picked Chicago Public Schools CEO Barbara Byrd-Bennett, who was sent to federal prison after pleading guilty to a multi-million-dollar kickback scheme involving public schools money.

Rahm Emanuel went on a privatization spree — to disastrous effect.

As mayor, Emanuel was happy to sell off much of the city’s public assets — everything from school janitorial services to the city’s transit fare collection service to even floating, at one point, the city’s 311 service. Privatization left Chicago with indignities like dirty classrooms and executing massive giveaways of public money to private corporations and Wall Street bankers.

Given his track record, awarding Rahm Emanuel a cabinet position in the new administration would be a disaster for the communities like the one I represent that helped defeat Donald Trump. And it’s a Sears Tower–sized insult to our city of Chicago, where we are continuing to deal with the devastating effects of his legacy every day.