The GOP’s inclusion of a special liability shield for health care industry executives represents a victory for the powerful New York lobby group that has been paying Donald Trump’s former lawyer to directly lobby the White House on its behalf — and that has been been funneling millions of dollars to congressional Democrats during the COVID-19 outbreak, according to federal records reviewed by Too Much Information (TMI).

In April, the Greater New York Hospital Association (GNYHA) drafted the original provision shielding health care industry officials from COVID-related lawsuits, and pushed it through the New York legislature with the support of Cuomo, whose political machine received more than $1 million from the group. Opponents charged that the law repealed a critical deterrent to corporate misbehavior and effectively rewarded executives at nursing homes where thousands of elderly residents were killed by the coronavirus.

Under pressure, New York lawmakers subsequently limited the scope of the liability shield in their state. However, GNYHA’s president last month told state legislators that his organization was pushing a national version of the legislation in Washington, where it has spent $1.2 million on lobbying this year. 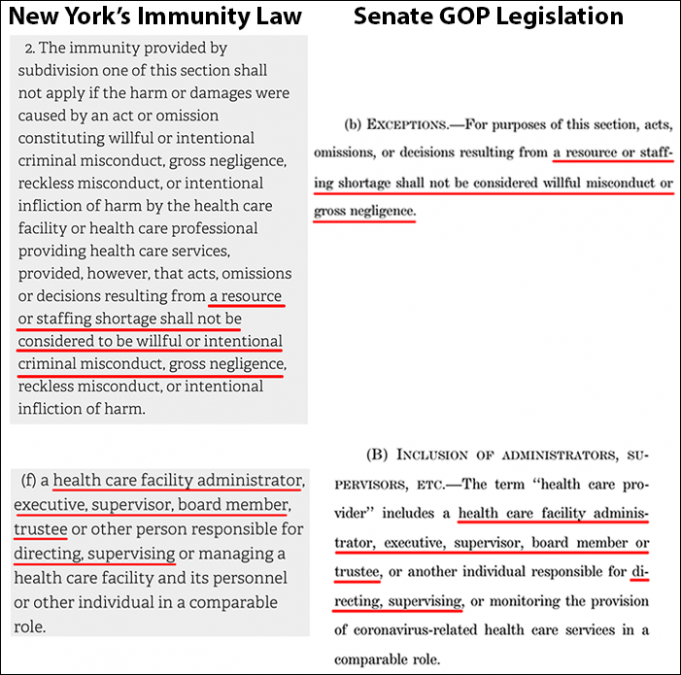 Pirro is a long-time personal friend of the president — their relationship began thirty years ago when Trump hired him as a real estate attorney. He is the ex-husband of Fox News’ Judge Jeanine Pirro and was once sentenced to twenty-nine months in federal prison for tax offenses.

Pirro has only been filing disclosures as a Washington lobbyist since 2017, when Trump became president. GNYHA — which is one of only three Pirro lobbying clients in Washington — has paid Pirro’s firm nearly $2.3 million since hiring him in 2017.

The New York Times recently reported that a number of nursing home companies, some of which have seen spikes in deaths due to COVID-19 along with allegations of mismanagement, have been recruiting Trump allies to lobby on their behalf in DC to secure relief funding, tax breaks, and a liability shield.

Lobbyists close to Trump are working for TL Management, a nursing home operator that has seen dozens of COVID deaths; Genesis HealthCare, the largest nursing home chain in the country; and Life Care Centers of America. In addition to employing his allies, the Times noted that a group of nursing home operators held a fundraiser last year for Trump’s reelection campaign at the InterContinental hotel that raised over $3 million.

The corporate immunity provision’s passage may hinge on whether or not Democrats oppose it. House Speaker Nancy Pelosi and Senate Minority Leader Chuck Schumer have joined progressive activists in denouncing the GOP effort to include liability shield language in the next relief bill.

However, as GNYHA has poured money into Democratic coffers, there are signs that the party’s opposition is far from guaranteed.

GNYHA has delivered more than $11 million to super PACs backing House and Senate Democrats since 2017, and $2.5 million since the coronavirus crisis began. Amid that flood of cash, some Democratic lawmakers are now suggesting they could support a federal version of New York’s liability shield legislation.

In May, the Hill reported that a number of Senate Democrats were open to the idea of liability protection for businesses to one degree or another. Names included Sen. Chris Coons, who said that he supported “a science-based, enforceable standard for the protection of employees and customers.”

“It’s critical that we combat this pandemic by taking immediate action to make our frontline workers safer,” Kaine declared in May.

But soon after, he suggested that that it isn’t a “completely unreasonable topic” to consider COVID liability protections limiting workers’ rights to sue employers whose workplaces are unsafe.

In the past, lobbyists have found reliable allies in moderate Democrats in fighting for corporate immunity.