“Defund the police” has become a nationwide mantra, and for good reason: budget data from across the country show that spending on police has far outpaced population growth and drained resources from other public priorities.

Basically, our cities have been siphoning money from stuff like education and social services and funneling the cash into ever-larger militarized security forces.

Nationally, the numbers are stark: between 1977 and 2017, America’s population grew by about 50 percent, while state and local spending on police grew by a whopping 173 percent in inflation-adjusted dollars, according to data from the Urban Institute. In other words, the rate of police-spending growth was triple the rate of population growth.

The former has been losing population over the last decade. At the same time, Mayor Rahm Emanuel grew the police budget by 27 percent during his eight-year term, to the point where Chicago now spends more than 38 percent of its general fund on police. Those increases coincided with a spate of police brutality scandals, as well as budget cuts that resulted in teacher layoffs and the mass closure of Chicago public schools. And yet Chicago’s new mayor, Lori Lightfoot, has been pushing a new 7 percent increase in the police budget.

In New York, it’s a similar story. Back in 2008, the city spent $4.1 billion on its police force, according to City Council documents. Twelve years later, the city is spending $6 billion on its police force. That’s a 46 percent increase during a period in which the city’s population growth was essentially flat. A new report by New York City comptroller Scott Stringer notes that in the last five years alone, spending on police rose by 22 percent, driven by a 6 percent increase in the number of officers on the force.

All this happened during a period when the city experienced many years of budget cuts to social services and schools. Indeed, as Public Citizen points out, New York’s police budget is now “more than the city spends on health, homelessness, youth development and workforce development combined.”

These are hardly anomalies, as illustrated by a Center for Popular Democracy report looking at twelve major cities. That analysis concluded that “governments have dramatically increased their spending on criminalization, policing, and mass incarceration while drastically cutting investments in basic infrastructure and slowing investment in social safety net programs” to the point where today, “police spending vastly outpaces expenditures in vital community resources and services.” 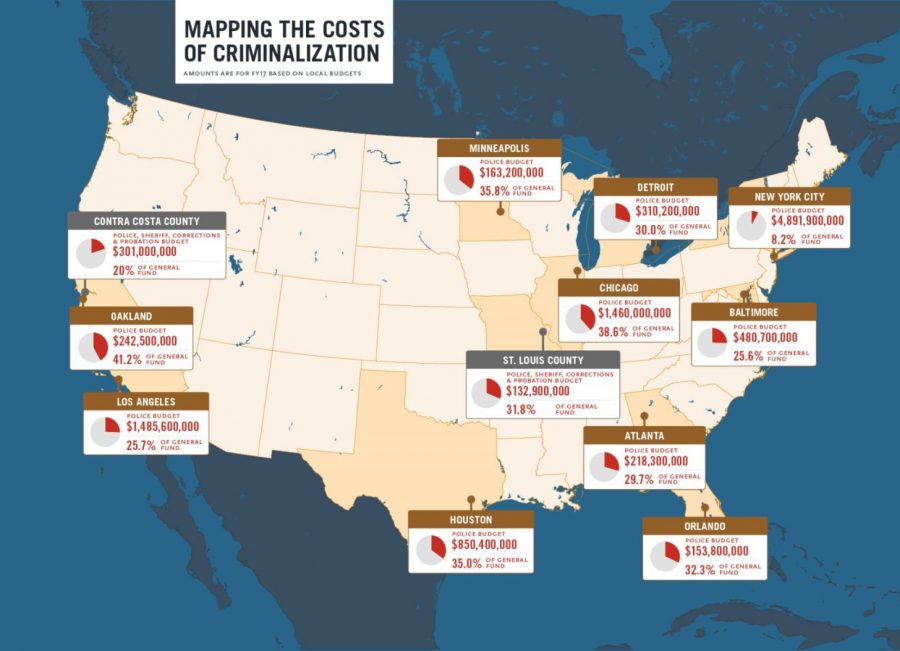 To be sure, political pundits and right-wing fearmongers will try to scandalize the “defund the police” motto, as a way to elide and denigrate the deeper systemic criticism of the criminal justice system. Just this morning, CNN’s Chris Cillizza — one of the most reliable purveyors of establishment conventional wisdom — is out with a typical bullshit clickbait article headlined “Is ‘Defund the Police’ a massive political mistake?”

Setting aside the grotesque spectacle of professional political mercenaries lecturing a youth-driven mass movement about proper etiquette and tone, there is the problem of so-called reforms not working. As a majority of Minneapolis City Council members declared this weekend: “Decades of police reform efforts have proved that the Minneapolis Police Department cannot be reformed, and will never be accountable for its action.”

Despite that truism, the opponents of wholesale change will inevitably continue pushing back, and they will be making two cynical bets.

First and foremost, they are wagering that America is forever frozen in the Reagan-Clinton era — the epoch in which retrograde politicians got elected berating “superpredators,” promising “tough on crime” measures, pledging to restore “law and order,” and pushing to deploy ever-larger quasi-military police forces throughout our communities.

They are also betting that Americans cannot process any nuance at all and that we will interpret “defund the police” as some sort of radical idea to turn the country into a completely lawless Purge-esque hellscape.

In the past, those cynical bets might have been pretty safe — after all, for the last forty years, America has indeed remained stubbornly authoritarian, inhumane, and stupid when it comes to criminal justice policy.

However, of late, there seem to be new signs that we’re getting smarter. Recent polls suggest that popular opinion is with the protesters, not the police — and favorability ratings for police have plummeted. Additionally, the New York Times notes that “never before in the history of modern polling has the country expressed such widespread agreement on racism’s pervasiveness in policing, and in society at large.”

And because of the recent protests — and years of prior activism and organizing — some local politicians are starting to move forward with sweeping changes. A majority of Minneapolis City Council members announced Sunday that they are beginning “the process of ending the Minneapolis Police Department and creating a new transformative model for cultivating safety in our city.”

No rational human being thinks public officials are going to instantly disband entire police forces. Clearly, though, many rational human beings seem ready to support significant reforms of police policy. And many may similarly support a change of budget priorities.

Let’s remember that only a few years ago, Donald Trump himself was submitting budgets proposing to defund the police. And now we’re seeing a similar push in some cities.

Whether or not we actually follow through and make those changes will hinge on whether or not we’re willing to have an honest discussion about how these outsize spending increases on police are draining resources from everything else.