A major party’s presumptive nominee enmeshed in multiple sexual harassment and assault scandals dropping out months before the general election is the sort of thing that seems like it could never actually happen — until it does. My bet is still that Joe Biden will power through the uproar over Tara Reade and accept the Democratic nomination in a few months down the road, but I’m not a fortune teller, and neither is anyone else.

Nevertheless, several other people have begun to game out what would happen in Biden were to drop out this late in the race. Some of the darker conspiracies imagine an endgame where Andrew Cuomo or Hillary Clinton are installed by party leaders at the convention, while writers like Alex Pareene imagine a less dramatic scenario: Biden withdraws, his opponents reenter the race, and the primary resumes. Again, I do not think any of this is very likely, but since so many possibilities have been put on the table I feel compelled, as a matter of due diligence, to make a simple point: if Biden leaves, Bernie Sanders will have the strongest claim to the nomination.

The pre-convention math is straightforward. To see the range of possible outcomes, let’s imagine that Elizabeth Warren — who is currently trailing in third place — wins all of the delegates that Bernie does not. Here are four scenarios: 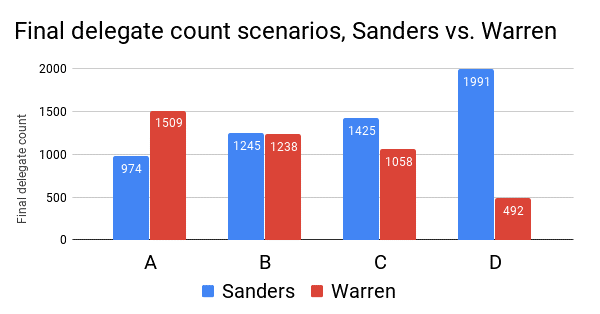 SCENARIO A — Warren wins 100 percent of remaining delegates. She would capture a plurality of the vote, but fall far short of a majority.

SCENARIO B — Sanders wins 19 percent of remaining delegates. With just this meager performance, Sanders would capture an insurmountable plurality.

SCENARIO C — Sanders meets 538’s current delegate average, wins 31.5 percent of remaining delegates. The math would change, of course, if Biden dropped out — but if Sanders simply matches his current performance in the remaining states he would hold a commanding lead of nearly 400 delegates. For perspective, this would be more substantial than Obama’s 2008 primary win over Clinton, where he beat her with a plurality by 294.5 delegates.

SCENARIO D — Sanders wins 71 percent of all remaining delegates. This would give Sanders a majority of delegates.

Looking at these outcomes, it is impossible for anyone other than Sanders to win a majority; improbable that anyone else can win a plurality; extremely likely that he would win a very strong plurality; and possible, though not likely, that he could win an outright majority.

It’s difficult to imagine a plausible pretext for denying Sanders the nomination if he were to enter the convention with an outright majority of votes. And looking at the math, this isn’t outside the realm of possibility, especially in this tumultuous primary.

But the most likely outcome, it seems, is that Sanders would enter the convention with less than a majority but a significant plurality. In terms of process, this would send the convention to a second round of voting, releasing all pledged delegates and bringing superdelegates into the fray.

This would be a politically dangerous stage for Sanders, since there are no real rules for who has to vote for him at this point — just arguments. For his part, Sanders would be able to appeal to his plurality, and would probably be able to point to the precedent of Obama as a win under logically identical circumstances. His opponents, meanwhile, would have to rely on all kinds of counterfactual speculation (“if Biden had dropped out earlier Warren would have won!”) and Calvinball maneuvers (“what matters is who has the most first plus second place support, not just first place support”).

Or, of course, they could simply declare the first round of voting irrelevant and win the second round with behind-the-scenes coordination, just as they coordinated to defeat Sanders in February, and perhaps by crowning someone who didn’t run in the primary.

I do not, once more, think that any of this is very likely: politicians in the modern era have learned that they can weather just about any scandal if they’re stubborn enough, and if Biden hasn’t dropped out yet it’s difficult to imagine what would finally push him over the edge. Nevertheless, since most pundits seem more concerned with who could be nominated than who should be nominated in the event of a Biden dropout, it’s worth keeping Bernie’s claim in mind.