For most products, you can assume you’ll get what you pay for. If you grab a six-pack out of the fridge, bring it to the cashier, and hand over the money, you get your beer. You don’t pretend that the liquor store did you some favor. You got poorer, the store got richer — and in return, you got something. This is commerce, not charity.

And yet there is one industry that is not held to this universal concept of transactions: private health insurance.

In America, a system of denied claims, wait times, paperwork, and bureaucratic red tape has worn us down and made us now presume that we won’t necessarily get the health care coverage that we buy. Indeed, just look at data from the Affordable Care Act (ACA) marketplaces: customers pay big money to purchase health insurance policies, but when they go to actually use the insurance product they bought, almost one in five in-network claims are denied — and we accept this as just a normal part of life in the world’s richest nation.

This is quite a feat — the insurance industry has created for itself a unique carve-out from capitalism’s most elemental economic laws about services being delivered in exchange for payment. And now as insurers rake in huge profits during a lethal pandemic, the industry’s propagandists are going a step further, insinuating that while insurance companies may begrudgingly pay some policyholders’ claims out of a sense of altruism, they don’t necessarily have a legal obligation to do so.

This was the sentiment expressed by an insurance industry front group, defending a new initiative that eschews an expansion of Medicare and instead purports to address the COVID-19 crisis by funneling money to insurance corporations through the COBRA program. That program allows laid-off workers to keep their existing health care coverage, but only if they somehow find the cash to pay both the employee and employer side of health care premiums.

The COBRA provision was written by Democratic lawmakers at the request of industry trade associations — and just after insurers’ lobbyists raised hundreds of thousands of dollars for House Democrats’ campaign committee. In response to COBRA critics like Medicare for All proponent Bernie Sanders, here’s what Heather Meade, a spokesperson for the insurance industry–backed Alliance to Fight for Health Care, told Politico:

It would be helpful for them to remember that it’s actually a selfless act of employers to do this . . . This bill pays just for the premiums, and either the insurance companies or the employers would pay the claims for people who are no longer employees. So it’s a lack of understanding of how COBRA actually works. There’s no bailout here.

There’s that scene in The Outlaw Josey Wales when Captain Fletcher tells a senator: ”Don’t piss down my back and tell me it’s raining.” Well, that’s exactly what’s happening here: the insurance industry is urinating on us and telling us to thank them for the precipitation.

Think about it: a health insurance company’s product — the very widget that it exists to sell — is security. The entire reason you pay a health insurance premium through your job is so that you receive a health insurance policy — one that presumably grants you the security of knowing that your medical claims will be paid out if you get sick. That assurance is literally the thing you are purchasing.

And yet we are now being told to believe that “it’s actually a selfless act” when insurance corporations and employers decide to “pay the claims” that are supposed to be covered by the policy you bought.

What makes this particularly grotesque is that the premiums we’re paying aren’t small expenditures. Americans are paying out the nose for the privilege of having claims denied.

Last year, health insurance premiums ate up more than 10 percent of the income of thirteen million Americans. The average family of four making $50,000 a year in a job with health insurance is now paying an annual $4,000 premium — on top of the premiums the employer pays. We are now spending twice as much on health care as we did in the 1980s, and “the biggest reason for the increase is insurance costs, which have grown by 740 percent since 1984,” reports CNBC. We are collectively spending about $1 trillion on premiums every year. 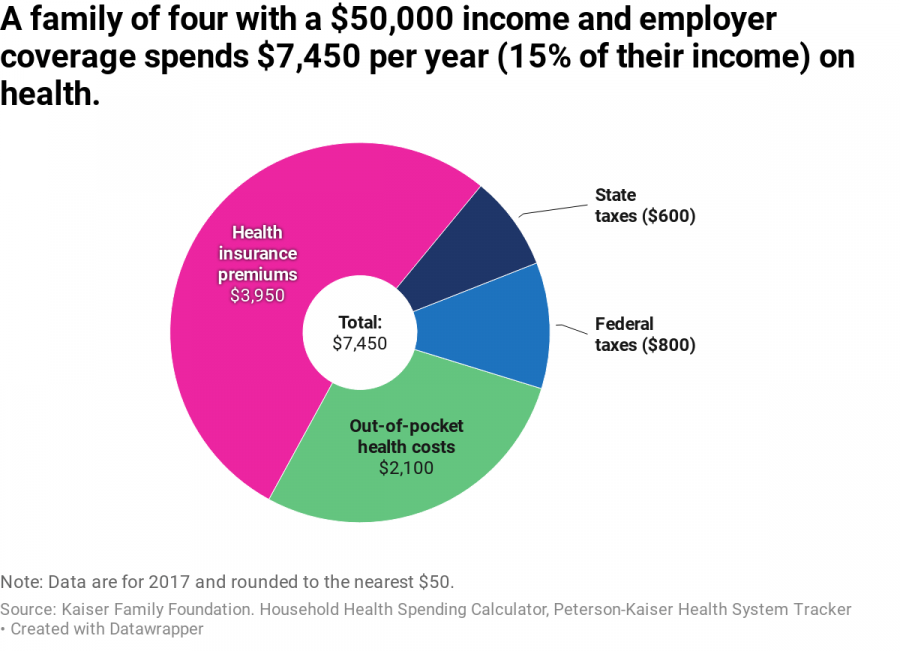 All of this money is buying insurance products that don’t actually guarantee us medical care — and so the question is: Is this really the system that we want to strengthen for yet another generation?

At this moment of crisis, when there is existing emergency legislation to expand Medicare, do we really want to instead use public resources to prop up a corporate-run health insurance system that is projected to cut forty-three million Americans off coverage during a pandemic?

Do we really want to eschew a Medicare for All program in favor of a byzantine COBRA program and ACA marketplaces that use our money to subsidize a health care system that denies care to millions while paying a handful of CEOs $2.6 billion in a single year?

Do we really want to further fortify an insurance industry that suggests that it is merely a voluntary “selfless” act — rather than an ironclad obligation — to provide medical care to its own paying customers in exchange for giant premium payments?

Do we really want to keep getting pissed on and told that it is rain?