In theory, a public health emergency like coronavirus should prompt lawmakers to do whatever they can to lower the cost of medical care for millions of people who lose their job-based health insurance. In theory, something like a public insurance option should be eminently achievable particularly in states that are completely controlled by Democrats.

But then there is the real world of a democracy that is dominated by corporate interests. In an emblematic turn of events in one blue state, the pandemic is now being cited as the rationale to kill rather than pass a state public health insurance option, after the health care industry spent millions of dollars successfully intimidating the Democratic Party into retreating.

The story of Colorado is not just an isolated incident — it is an emblematic tale reminding us that even in the most deadly health care crisis, modest reforms to the corporate-run health care system will face stiff opposition from those with a vested financial interest in preserving a deadly status quo.

A Huge Victory and Big Hopes for Progress

Less than two years ago, Colorado Democrats notched a historic victory at the polls, winning the governorship, both chambers of the legislature, and every other statewide constitutional office. With longtime single-payer proponent Jared Polis as governor, the wins resurrected hopes that Colorado would soon make ambitious health care reforms even after the state saw Democratic consultants join with the health care industry to crush a single-payer ballot measure in 2016.

Since that ballot initiative, Colorado has continued to face pricey health insurance premiums and some of the country’s most expensive hospital costs — and so newly empowered Democratic lawmakers last year passed a bill directing Colorado regulators to design a public health insurance plan, which they began finalizing in November.

The Polis administration said the plan, which would cap hospital reimbursement rates, could save enrollees up to 20 percent annually on their premiums. It would be sold by private health insurers on the individual marketplace.

The so-called Colorado Option legislation soon became the “centerpiece” of Democrats’ legislative session, according to the Denver Post. And yet in the lead-up to the bill’s official introduction in March, the health care industry had already spent months blasting the proposal on the airwaves using a secretive new front group called the Partnership for America’s Health Care Future (PAHCF) Action.

The new group — which started running ads on Colorado television networks in December — is led by Chip Kahn, the president of the Federation of American Hospitals. His trade association represents investor-owned hospital companies like HCA Healthcare.

HCA is the federation’s most important member. The company is a behemoth — it reported $51 billion in revenue and $3.5 billion in net income last year, and paid its retiring CEO $109 million in 2018 alone. Campaign finance records show that HCA’s political action committee and its executives have supplied at least 57 percent of the cash raised by the federation’s PAC so far this election cycle. HCA told Colorado Public Radio in January it supports the efforts of the PAHCF Action campaign.

HCA owns a chain of comically expensive hospitals in Colorado. Last year, HCA’s North Suburban Medical Center was featured in NPR’s “Bill of the Month” series, when a man received a $12,460 emergency room bill after seeking help for a hangover from his bachelor party. As the Intercept’s Lee Fang reported, HCA also owns a medical debt collection firm that has sued roughly eight thousand people in Colorado since 2010.

By mid-March, when the legislature suspended its session due to the coronavirus crisis, PAHCF Action had already spent nearly $4.5 million on a full-service propaganda campaign in Colorado to demonize the public option plan. The campaign featured TV and digital ads, direct lobbying, and so-called grassroots consulting, according to state records filed by the Washington lobbying firm Forbes Tate. 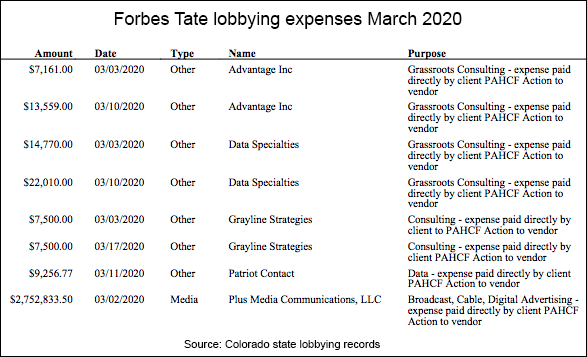 All that money ultimately delivered the results the health care industry hoped for.

Amid more than 358,000 Colorado unemployment claims and more than 16,000 confirmed COVID cases, Colorado Democrats on Monday retreated on their public option plan, saying it would not be considered when the legislature reconvenes later this month. Incredibly, rather than prompting lawmakers to accelerate the public option plan, the coronavirus crisis reportedly led lawmakers to table the legislation.

“The prime backers of the legislation, House Bill 1349, say the coronavirus crisis has made it impossible to ensure that all of the relevant stakeholders — hospitals, doctors, and insurance companies — can be involved in the lawmaking process,” the Colorado Sun explained.

And yet, by all accounts, these “stakeholders” have been very involved in the lawmaking process. The bill’s own sponsors acknowledge that the legislation was the result of “a multiyear legislative process, months of direct meetings with stakeholders, and countless hours of bill drafting and amending.” Moreover, more than ninety lobbyists reported involving themselves in the legislative process by opposing the bill at the Colorado capitol in February and March, according to state records. That’s almost one lobbyist for each of the one hundred lawmakers in the Colorado General Assembly.

The country’s top health insurers — UnitedHealth, Anthem, Cigna, and CVS Health (they own Aetna) — all lobbied against the state public option. America’s Health Insurance Plans (AHIP), which lobbies for health insurers in Washington, DC, did too.

HCA, the Colorado Hospital Association, and nonprofit systems like the University of Colorado Health and SCL Health have lobbied against the bill as well. The legislation was also opposed by radiology provider Mednax and the Colorado Radiological Society. 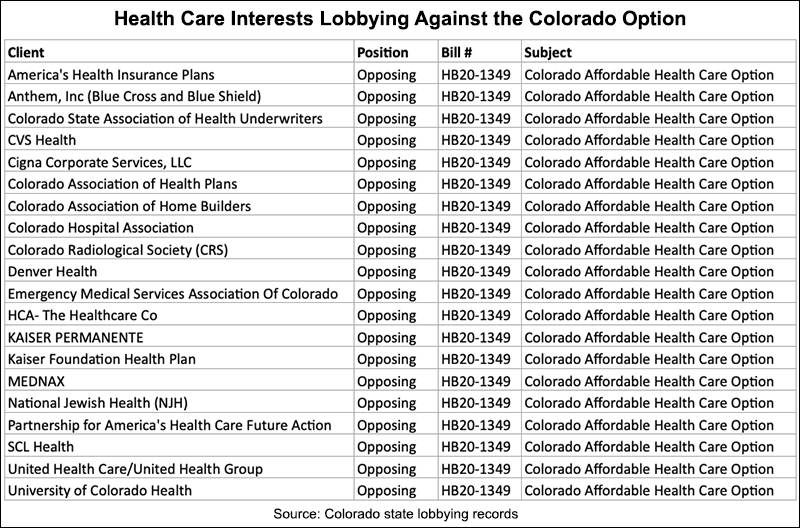 A handful of health care providers have lobbied in support of the legislation, including the Colorado Community Health Network, which represents community health centers, and the Colorado Academy of Family Physicians.

Democrats assert that they are merely delaying rather than torpedoing the public option legislation in order to bring it up at a more opportune time. However, there is little doubt that most of the health care industry will oppose a public health insurance option no matter what — at least if it continues to threaten company profit margins and executive salaries.

Holding off on demanding a public option for a year not only leaves thousands of people at the mercy of private health insurance corporations during the pandemic, but it also provides the industry way more time to message against any future bill.

It’s a hell of a political strategy.